Jamie Smyth in Sydney and Philip Stafford in London

Australia’s biggest stock exchange has apologised after a software fault in a new trading system left investors unable to trade for most of Monday.

ASX Ltd, which runs the market, was forced to halt trading after just 20 minutes because of a glitch that created inaccurate market data, and remained closed for the rest of the day.

It said it deeply regretted the disruption to one of Asia’s largest equity markets, where typically deals worth about A$5.9bn (US$4.3bn) change hands every day. The issue will be resolved before Tuesday’s session, it added.

The outage, the largest on the exchange for more than a decade, came on the day ASX went live with a new trading system, provided by US exchange Nasdaq.

“It has been an extremely frustrating day, following confirmation that the ASX market will not open until tomorrow morning,” said Niv Dagan, executive director at Peak Asset Management, a Sydney-based investment company.

His company was “using this time to speak to a number of our small-cap funds and institutional investors relating to their core positions”, he said.

It is the second high-profile technology issue for ASX this year — in March it ordered its most active traders to ease off at the height of global market volatility to avoid putting too much strain on the exchange and banks.

It has been an extremely frustrating day

ASX said it had conducted extensive testing for more than a year, including four dress rehearsals, to prepare for the rollout.

“The outage falls short of the high standards we set ourselves and the standards others expect of us,” said Dominic Stevens, chief executive.

“Notwithstanding the extensive testing and rehearsals, and the involvement of our technology provider, ASX accepts responsibility. The obligation to get this right and provide a reliable and resilient trading system for the market rests with us,” he said.

ASX and its technology provider Nasdaq said a software issue had created inaccurate market data when multiple securities were traded in a single order.

The system outage comes at a sensitive time for ASX, which was recently forced to delay an ambitious plan to use blockchain technology to clear and settle trades in Australian equities due to customer concerns.

The market shutdown at the start of a busy week caused chaos for investors, who were unable to trade for most of the day while the equities market hovered near an eight-month high. The S&P/ASX 200 index was up 1.2 per cent at 6,484.30 when trading was suspended.

The trading shutdown in Australia is the latest in a series of technical gremlins to hit global stock exchanges over recent months. 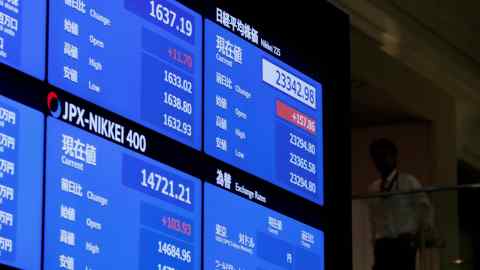 Last month, a hardware glitch caused the Tokyo Stock Exchange to suspend equity trading for a full day, its worst outage since the world’s third-biggest bourse shifted to a fully electronic system in 1999.

In August, the New Zealand stock exchange suffered four days of severe disruption when hackers targeted its website with a distributed denial of service attacks — a form of cyber assault that involves swamping a website with so many requests that genuine users cannot get access to it.

Trading in stocks and derivatives on markets run by Euronext, the European operator, shut down for several hours in October due to a software problem.