Stroll across an ice cap and stroke a polar bear. Kill an alien with a lightsabre. Do football tricks while your favourite sports star stands by your side, coaching you.

These are just a few of the otherworldly experiences offered by start-up INDE using augmented reality technology.

AR, a fast growing sector, is similar to virtual reality. But instead of viewing a purely digital world through a headset, for example, with AR the digital content is overlaid on the real world.

The technology is more commonly known for its use in mobile apps. Take Pokémon Go, where gamers use their smartphones to find, capture, train and fight virtual creatures superimposed on the real world captured by the phone’s camera. Or messaging app Snapchat, where emojis that adapt to a user’s expressions can be overlaid on selfies.

INDE offers this kind of interactivity — but on a much grander scale, typically on large screens in museums, zoos or shopping centres, where others can watch.

It is this innovation, changing the nature of consumer experiences, that led judges to recognise the company as part of the disruption category in the inaugural FT Future 100 UK.

Alex Poulson, the company’s founder and self-labelled “cheerleader-in-chief”, says he stumbled upon the nascent technology by accident.

On its first job in 2010, the independent start-up, which began as a digital agency, pulled together a pitch for a Charles Saatchi initiative to create an app that would allow people to see what a piece of art would look like hanging in another room.

While the project did not go ahead in the end, “we had found a technology that was bigger than us”, Mr Poulson says. Convinced of its future prospects, the company decided to focus solely on designing AR products.

That bet appears to be paying off. In less than a decade, INDE has gained clients including National Geographic, drinks giant Coca-Cola, filmmakers Universal Studios and, for the promotion of Frozen Planet, the BBC. 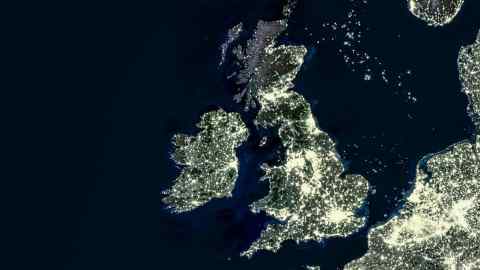 In many cases, it creates a large-screen animation that the public can interact with, as a novel way to help the brands draw people into their content. INDE charges between £25,000 and £250,000 per product, which includes hardware, software and licensed content, including for mobile.

The 25-strong team is spread between its Northamptonshire headquarters and sites in Budapest, Los Angeles and Hong Kong. It has customers in more than 40 countries. As well as its big screen offerings, the group has branched into creating mobile products, a market that is swiftly heating up.

This puts INDE in competition with other digital agencies that work on tailored projects for clients, but also the likes of Google, Facebook and Apple, US tech giants that are developing AR capabilities in-house.

Apple is investing heavily in augmented-reality camera systems and in developing headsets similar to the Google Glass eyewear.

Meanwhile, in June, Google launched its Google Lens mobile app, which, like the smart glasses, tries to recognise objects and offer more information about them in real time.

The opportunity appears huge. Juniper Research, a digital consultancy, predicts that the market value of AR will reach $26.1bn by 2022. Nearly $20bn of this will be focused on mobile apps for consumers, namely gaming. More than $5bn of the market will be serving the enterprise sector, Juniper estimates, up from $515m in 2016.

One area with particular promise is retail, experts say. Here, technology can allow a person to effectively try an outfit on their digital self, or see what furniture might look like in a room, before they buy it.

“If time is precious, at least you get a sense by simply being able to right click and see what things will look like in situ,” says Andrew Rimmington, one of the judges and a partner at law firm Mishcon de Reya with a focus on technology and software.

The FT Future 100 UK is supported by Mishcon’s The Leap programme.

“I see [AR] as the future of the shopping experience,” says Mr Rimmington, adding it has the potential to boost sales for retailers. INDE has been working on its proposition for the retail industry over the past year, developing a new brand called Vyu, which it plans to launch shortly.

Mr Poulson predicts that such tools will become part of everyday life within the next decade.

“The technology, the software and hardware isn’t there yet but it will come,” he says. “The traditional marketing model will disappear and you’ll be left with arming people with the right information at the right time.”

There are challenges ahead. One is getting the technology right. Research and development costs make up 40 per cent of INDE’s revenue and more than a quarter of its team. “Most of what we are doing is completely new,” Mr Poulson says. But as an export-led business, “the biggest challenge is exposure”, he adds.

China has proved hard to crack. “It’s still a difficult market to be involved with for language reasons [and] culturally,” he says, adding that many Chinese companies preferred to source technology from other Chinese firms. Managing a group of people overseas has also been a challenge.

Still, INDE has the luxury of being an early entrant to a growing space. While it declined two offers of investment last year, Mr Poulson is hoping to attract investors to help develop Vyu — and, longer term, even a buyer.

“I don’t think there are many people yet in the market that understand the longer-term value of the tech,” he says.

But that is likely to change as the AR market expands. As INDE develops “more and more use cases”, Mr Poulson says, its clients have become “larger and larger”.