Millennials discuss why they cannot afford to buy homes

When we launched our Millennial Moment series last month, we put a survey to FT readers asking them how financially stable they felt. We received replies from 457 readers between the ages of 18 and 36. Responses came from round the globe, with roughly half from the UK, 16% from other European countries, 12% from the US and Canada, and the remainder divided across Asia, the Middle East, Latin America and Africa.

This is an unofficial survey, not meant to be representative of all millennials. Most respondents indicated they were young professionals with well-paying white-collar jobs. Financial security is often a birthright, and 77% of respondents to our survey said they had received some form of financial support from their parents.

Despite this, when asked whether they had to forego or delay any milestones because of their financial situation, nearly half of respondents said they have had to delay buying a home. It was the most common concern among respondents.

“I am in a well represented demographic of London-based millennials trying to establish a financial base,” wrote Tom Lindsey, 28, of London. “I am fortunate to have had a good education, and I worked hard to make the most of my opportunities. I now have a reasonable salary that sustains me.

“But I have limited savings, little prospect of buying a house and have spent two years saving to get married. I have no assets and no real inheritance from my parents, so I will need to create my own wealth to help start and support a family. I was given opportunities that are not available to many, so I find it baffling that I am ‘struggling’ to afford to live, get married and buy a house. I have absolutely no idea how those on lower salaries in similar situations are surviving.”

Lizzy, 26, expressed a common frustration about renting in London. “A small part of me dies inside every time I pay rent, which essentially is paying someone else’s mortgage for them,” she wrote. “My housemates and I pay around £23,000 per year to rent a slightly rubbish ground floor flat which is in serious need of repair. We could have [a down payment on] a house per year between us for the past three years with that money.”

Rachel, 27, of Darien, Connecticut, thinks the millennial experience varies greatly depending on location, perhaps because of the cost of living. “I live in the greater NYC area and it seems like nobody is settling down, buying houses, having kids, or even committing to long-term relationships,” she wrote. “My friends in the midwest and mid-Atlantic regions are doing all of these ‘adult’ activities at a much more rapid pace.”

“I think your quality of life hugely depends on the quality of life your parents are living,” wrote Valerie Armbruster, 20, of Frankfurt. “If you have disposable income from older generations, you’re doing just fine. I still live with my parents which means they cover most of my expenses. It’s a very big help. Many of my friends who have to pay for everything themselves are struggling.”

Video: In this together — the rise of millennials' multiple occupancy

Many respondents cited the financial crisis as a formative experience in their understanding of money, and as something that has affected their perception of personal finance and risk.

“I have enough savings that I’ll be OK in emergencies, but I definitely am not set up for the long term,” wrote Anna, 28, of Seattle. “I saw the market tank and many people in my family lose their 401(k) and stocks. Now that I’m in a place to start investing, I worry that the same thing will happen. It makes me nervous to put trust into a system that I have seen fail already, but I don’t really know what other options there are.”

Alex, 33, of London wrote that the conventional wisdom about the millennial economy often gets cause and effect backward. He wrote: “I often see statements like, ‘millennials should stop spending all their money going out and start saving,’ or ‘millennials don’t value things and only spend their money on experiences’. These assume that we’ve somehow chosen to not have enough money; that we have only ourselves to blame and we don’t deserve any help. But none of us chose to be born at the beginning of the real-wages plateau, or to come of age during the housing shortage, or to enter the workforce during the global financial crisis. Not earning enough money is simply the hand we’ve been dealt, and the only free choice is how we live with that reality.”

We asked respondents to list the top three essentials and non-essentials they spend their money on each month. The five most popular essentials will not come as a surprise: rent, food, transportation, mortgage, and bills.

(That said, one respondent, Sarah, a 28-year-old from London, has different budgeting priorities: “I live on a boat, so no rent or mortgage,” she wrote. “Transport and phone are my biggest regular outlays, plus fuel in the winter and the expense of when things inevitably go wrong.”)

The five most popular non-essentials were eating out/restaurants, travel/holidays, health and fitness (mainly gym subscriptions and workout classes), bars/pubs/going out, and clothes. Although the gender breakdown was predominantly male (63%), 12% of all respondents listed beauty as one of their top three spending choices. And 14% spend a substantial portion of their money on subscriptions — listing everything from Netflix to newspapers, contact lenses, meal kits, even tampons.

A number of American respondents expressed concern about student loans holding them back.

“Student loans have severely postponed most of my life goals, even with income-based repayment,” wrote Peter, 31, from Oakland, California. “Losing my job unexpectedly concerns me the most. I spend so much trying to keep the interest down on my student loans that I cannot afford to. In comparison, my parents had three kids and a house by the age of 25.”

Articles in this series examine millennials’ dramatic impact on the world’s economy.

Part one
Introduction, and millennials in charts

“Despite having a good income, I cannot save enough to buy a house due to my student loan payments,” wrote Gustavo Perez, 30, from Miami, Florida. “I have a 12-year-old daughter. I got my university degree and work a solid job in a tech company making more than my peers. But I live in Miami, a very expensive city, where home ownership does not seem possible until I pay off my student loans. By that time, I will have to pay for university for my daughter. Cities all over the USA have allowed developers to build massive luxury condominiums, while not building units that the majority of people can afford.”

Despite their concerns, overall more than 50% of respondents felt financially secure. Gregor, 29, a British expat living in Hong Kong, co-owns a six-year-old start-up. “I read a lot of comments from London-based millennials who all seem to be struggling over the same issues,” he wrote, “but there is a broader spectrum of millennials out there. Over the last three years, my company has become more successful, with a six-figure operating profit. I am able to pay myself a good salary and have sufficient savings personally now, and in the company.”

Millennial readers: do these experiences reflect your own? Let us know how financially secure you feel — and what concerns you the most financially — in the comments below.

Are you interested in news and analysis about the markets? Sign up to the FT Markets WhatsApp group. Whether you are a subscriber or not, the stories will always be free (outside of the FT’s subscription paywall).

Explore the series
READ MOREMillennial moment: the business of a generation
How to save money: tips for millennials 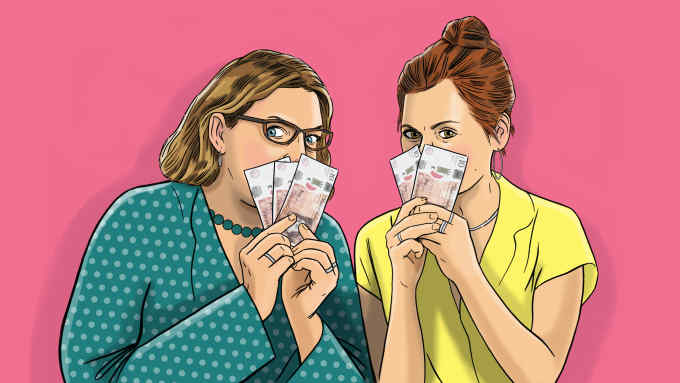 Millennials are not only disrupters and innovators — they are now also the world’s most powerful consumers. In this major FT series we investigate how the millennial effect is upturning business and industry, from the US to China