British businesses are set to come under fresh pressure to appoint more women to senior leadership positions, as ministers prepare to relaunch the Hampton Alexander equality review with an expanded remit later this year.

The five-year Hampton Alexander review came to an end in February after a final report showed its target of a third of women in board positions had been achieved on average across the FTSE 350.

Ministers are now drawing up proposals with the review’s management team for a fresh push to ensure that UK companies have at least 40 per cent female board directors.

The review’s remit is expected to be extended across large unlisted companies to encourage more widespread gender balance across British business, as well as to senior leadership positions outside of the boardroom, according to people familiar with the plans.

The UK government will kick off a search for new chairs for the programme, which is expected to continue under the formal title of the scheme: the FTSE Women Leaders Review. Sir Philip Hampton stood down as chair in February and Dame Helen Alexander died in 2017.

A person close to the review said there was much further to go before women were equally represented in British business. More than 100 FTSE 350 companies have still not met the 33 per cent target, with only a single woman on about 16 boards.

“A third is not gender parity. Why should we stop there and not aim to achieve proper boardroom equality? Investors want companies to pick up the pace too,” said the person.

A joint letter from Kwasi Kwarteng, business minister, and Liz Truss, women and equalities minister, seen by the Financial Times said officials have been considering proposals and “have come to conclusions very similar” to those of the management team behind the review.

The letter was sent last week to the review’s chief executive Denise Wilson and its independent steering body, which includes executives from Tesco, KPMG and Lloyds.

It said the review should “aspire to a 40:40:20 gender parity measure” achieved through fair recruitment on the basis of merit.

“Rather than mandating an exact balance at all times, this measure would act as a guide, so that neither gender is grossly over-represented (more than 60%) nor under-represented (less than 40%) at board and senior leadership level.”

The letter pointed to research that showed companies approaching this ratio tended to be more profitable. “As such, they may also recover more quickly from the impact of the pandemic,” Kwarteng and Truss wrote. 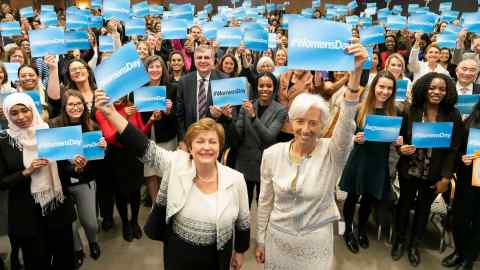 A separate letter has been sent to FTSE chief executives from the business department and the review saying that “ministers . . . and the steering group are finalising the next stage of this review”.

Officials want the review to continue to scrutinise key decision-making roles such as chief finance officer and chair, “which should no longer remain an exclusively male domain in any company”, the letter from Kwarteng and Truss said.

Both ministers also back plans to invite the largest non-listed companies to report on progress towards these targets. “Widening the scope of the review will ensure greater regional and socio-economic reach as we track female representation across a greater proportion of the workforce,” the letter said.

However, private companies are already concerned about the number of new regulations facing them under the forthcoming audit reforms, which executives worry will add cost and paperwork to their operations.

The business department said that “there is still a way to go, so we encourage companies to do more to accelerate progress toward more inclusive and diverse workplaces”.