We use cookies (opens in new window) for a number of reasons, such as keeping FT Sites reliable and secure, personalising content and ads, providing social media features and to analyse how our Sites are used.
Manage cookies
Accept & continue
London Business School

Founder Ismail Ahmed spied a gap in the remittance market

When he worked for the UN, Ismail Ahmed blew the whistle on alleged corruption in some of its aid activities. In the aftermath, he was found to have been unfairly treated by the UN Development Programme, by then no longer his employer, and was awarded compensation.

The money, which he says amounted to £200,000, allowed him a new start as an entrepreneur. “I had the chance to do it on my own,” the Somaliland-born founder of WorldRemit explains.

His company, based in London, has carved a niche enabling expats to send cash to more than 120 countries, either as an electronic bank transfer, cash pick-up or mobile phone airtime top-up. It has also grown very quickly. It raised $100m in a funding round last year based on a valuation of $500m, just six years after it launched.

Mr Ahmed became interested in finding more efficient ways to transfer money across borders after arriving in the UK as an economics student in the early 1990s and having to pay high street banks fees of more than 10 per cent of any cash sent back home.

In Somaliland, a system was well established to let expats send money back at close to zero cost. People working overseas would hand their spare cash to traders in need of money to buy stock. They in turn would sell their goods in the country for which the money was destined, handing over the proceeds of their sales to a named recipient.

The close-knit communities of Somaliland gave the necessary degree of trust that these rudimentary transfers would be carried out in good faith.

With the development of online platforms that enable people to send one another money instantly over a mobile phone, the remittance market was ripe for disruption, Mr Ahmed reasoned. But this entrepreneurial ambition had remained a dream until he received his compensation money.

Having secured more early-stage funding than most of his peers in London’s tech start-up community could dream of, Mr Ahmed decided that he could improve his chances further as an entrepreneur with some formal business education.

He chose the executive MBA course at London Business School partly because of events he attended as an undergraduate student, which had helped nurture his entrepreneurial ambitions.

The 10 episodes begin with the husband-and-wife team behind treetop adventure company Go Ape.

At a remittances conference LBS hosted in 2005, Mr Ahmed managed to grab a conversation with one of the guest speakers, Mo Ibrahim, the Sudanese-British mobile communications entrepreneur and billionaire.

“After listening to him talk about his start-up [Celtel, an African mobile phone business] I said this is the place where I need to do something,” he recalls from his time at the conference.

Another reason for seeking formal tuition was a previous unsuccessful attempt at entrepreneurship as an undergraduate student, when Mr Ahmed tried to create a business exporting books from London to east Africa.

“I had already done the university of life experience,” he recalls about the venture, which he eventually closed after failing to get sufficient traction and funding to sustain operations.

“Failing in that business convinced me that I needed to go to LBS to improve my skills.”

Once accepted on to the executive MBA programme, Mr Ahmed focused on filling in what he perceived as the gaps in his knowledge as a founder.

“I could read financial statements but I needed to understand branding, marketing and leadership.”

Today WorldRemit is a global operation, employing 200 people in offices in the UK, the US and Australia. Revenue was £27m ($38m) last year, up from £15m in 2014, and earlier this year the company secured a $45m line of credit from US growth fund TriplePoint Venture Growth and Silicon Valley Bank. 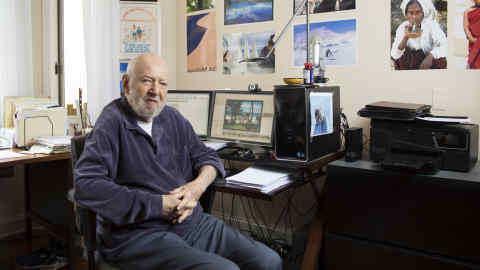 WorldRemit customers can currently send money from about 50 countries, so the plan for the future is to expand operations to all corners of the globe, according to Mr Ahmed.

From its original, unusual source of seed funding, WorldRemit has raised more than $147m from investors, including Accel Partners, an early backer of several successful tech start-ups including Facebook, Dropbox and Spotify.

A lot of money is needed to enable WorldRemit to gain licences to send cash between different geographic locations, Mr Ahmed notes. At least he can now turn to conventional venture channels to find the funds to do this.