Chinese consumption has become so large that the country is the most important market for luxury and car companies — and is driving sales for global healthcare, entertainment and apparel brands.

For decades the ruling Communist party’s encouragement of saving to fund domestic investment and the accumulation of foreign capital through export surpluses meant even as workers’ incomes rose, they struggled to afford goods that their country exported.

By 2008, household consumption had fallen to 36 per cent of China’s total spending from 47 per cent in 2000. This compared with 70 per cent in the US, while disposable incomes averaged just $2,200 per year. As a result, multinationals drawn to China by the prospect of 1.3bn consumers often retreated disappointed.

But since 2008, a tighter labour market boosting wages and capital gains from a housing price boom more than doubled average incomes, which reached $5,800 last year. Consumption has been the single biggest driver of growth since 2011, and household spending approaches 40 per cent of GDP.

“It’s new households coming into the middle class stage which is driving consumption,” says Daniel Zipser of consultancy McKinsey. “The auto industry very much depends on China. The beauty and sports industries have a high share of their global business coming from China.”

Rising affluence has been most visible in the automobile sector. China overtook the US as the world’s largest car market in 2009 and while the pace of growth has slowed, 29m vehicles were sold in China last year compared with 18m in the US.

Volkswagen generated 41 per cent of its sales in China, while GM made 39 per cent and Ford 24 per cent in 2016, with profits generally an even higher proportion, according to consultancy Evercore.

Chinese consumers became the world’s biggest spenders on luxury brands in 2012, according to consultancy Bain, and now account for around a third of global purchases — mostly by Chinese tourists overseas.

But as price differences fall, luxury sales are returning to China with sales there accounting for a rising share of global luxury brands’ income — 27 per cent of sales last year for French group Kering, which owns brands such as Gucci, and 35 per cent for Swiss brand Swatch.

Beyond luxury, China is now the world’s leading consumer of smartphones, while its movie and sportswear markets are second only to the US.

China overtook Japan to become the world’s second largest drug market in 2013. Britain’s AstraZeneca made $3bn in China sales last year, about 13 per cent of its global total while the US’ Pfizer made 7 per cent of its revenues in China last year, trailing only the US and Japan.

While there are headwinds to China’s consumer market such as rising personal debt, the risk of a housing bubble and slowing productivity growth, analysts are bullish on prospects for the next decade. Disposable incomes will expand by nearly 8 per cent a year through to 2020, according to brokerage CLSA, which predicts that the household savings rate will fall to 27 per cent.

China’s consumer market is now firmly in a middle-class stage, where growth comes from selling higher-quality products. Volume sales of pork, beer and instant noodles have peaked in recent years. “China has already reached a good consumption level in terms of volume for all the food and beverage categories, so growth comes from premiumisation,” adds Mr Zipser.

That should be good news for foreign brands, who sell more premium products. But in practice Chinese consumer brands have been faster to adapt to the upgrading trend than multinationals.

In China’s urban fast moving consumer goods market, worth $190bn, Chinese companies’ sales grew more than 8 per cent in 2016 compared to just 1.5 per cent for foreign brands, according to a report from Bain and Kantar Worldpanel.

The consumer divisions of multinationals can be hampered because they make key decisions outside China, analysts say. “Chinese brands are squeezing the global brands if [the latter] have not caught up to the upgrading trend,” said Max Lin of asset manager Actis.

Some multinationals are changing the way they operate. Kraft Heinz last month launched a premium range of cookies resembling its Oreos but priced “significantly” higher than the real thing as well as domestic brands.

To design the product. the company moved people to China and “built a local team based on Chinese knowledge,” says Ze Dias, China managing director at Kraft Heinz. “We like to operate like a smaller business. When it comes to how to win in the market it has to be decisions made by local people that are close to consumer needs”.

Explore the Special Report
READ MOREDoing Business in China
China: being a toy making powerhouse is no longer child’s play 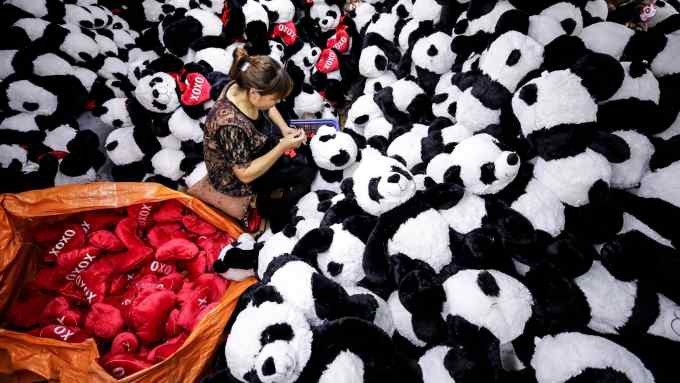