Ceramicist Lubna Chowdhary: ‘The language of white male artists was being presented to me all the time’

“I don’t feel as though I’m just existing in one visual history,” says the ceramic artist Lubna Chowdhary. “Culturally my background is quite diverse and often at odds. Minimalism and ornamentation don’t always come together, so I’m interested in how to bring them together.” She appears to have succeeded. In her garden studio in south-west London, the precisely cut geometric tiles that line the walls are hand-glazed in fizzy sherbet colours.

But her harmonious aesthetic did not come easily. Born in Tanzania to Indian parents, then raised in the north of England before studying at the Royal College of Art in the late 1980s and early 1990s, Chowdhary struggled to find a visual language that represented the multiple strands of her identity.

“The language of white male artists was being presented to me all the time,” she recalls, dressed majestically in an emerald-green shirt dress and red lipstick. “And I really didn’t have anything in common with it. In craft, it was the tradition of Bernard Leach, and I just found it dull and uninspiring. The lack of colour, the earthy surfaces. Ceramics were vessel-formed, plinth-based, quite conventional. And my work didn’t fit that format.”

It was the discovery of the anthropological collections in museums such as the V&A and Oxford’s Pitt Rivers that gave Chowdhary a framework for her own thinking. “It was the first time I’d seen non-European objects in institutions, and I was just so relieved to see things that were made of a variety of materials, where you could see the maker’s hand at play.”

Indeed visible throughout her works is the curator’s impulse to draw together groups of objects in order to tell a story. For her ongoing work “Metropolis”, which took over the Asian and European Ceramics Gallery of the V&A in 2017, she made over 1,000 miniature clay sculptures, laid out on the floor in a random arrangement. The result is a sea of works, each drawing on an overwhelming number of reference points, from satellite technology to kitchen equipment and children’s toys. “It’s a piece that explores hybrid languages of making and hybrid cultures,” she explains, “and traverses different times, histories and geographies.”

But where “Metropolis” was interested in objects, her recent work “Tableaux” (which will occupy Jhaveri Contemporary’s booth at this year’s Art Basel Hong Kong) is more focused on architectures. “In Asian cities you see bamboo scaffolding against a skyscraper, against glass and steel. So this is about those juxtapositions,” she says.

It is built from tiles that are drawn on Adobe Illustrator, then cut using precise waterjet technology, and glazed by hand in her studio — a combination of industrial techniques and hand-making. The pieces are then grouped together in small ceramic cities, what she calls “compositions”. They are displayed leaned up against the wall — an effect that, she says, gives the work a sense of horizon, and the illusion of being able to walk around them.

From the sculptural busyness of “Metropolis”, how did she shift to the sparseness of tile? “Tile has a tradition in both the Middle East and here,” she says, “a tradition existing in two separate cultures. So it’s nice to have a form where I can switch between references. For me tile became like paper for a collage artist.”

The ways in which eastern and western visual traditions collide, intersect and mingle are at the heart of this new project. Flicking through sources on her laptop, Chowdhary talks me through the objects and images she worked with. One archive drawing shows a man dressed in a British army uniform from the colonial era, lying on a bolster smoking a hookah. “But he’s got his shoes on!” Chowdhary laughs, “that’s a real no-no.”

It’s a picture that Chowdhary stumbles across at the very end of the reel that makes it all fall into place for me: a photograph of a beautiful but random array of decorative objects arranged on a fireplace, taken in her parents’ house. “They brought elements from every aspect of their culture with them,” she says. “African figurines from Tanzania, souvenirs from their travels to Mecca, and then shire horses from their time in Lancashire. And it was all really ugly but it all kind of came together without any consideration as to how it would all work.” It’s by giving these cultural crossovers materiality that Chowdhary enables us to see them and explore them. 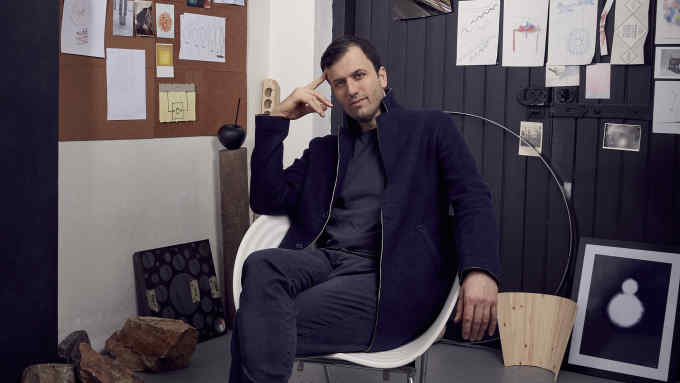