Benjamin Parkin in Mumbai and Amy Kazmin in New Delhi

India’s central bank has seized control of the country’s fourth-largest private lender, enlisting the top state bank to lead a rescue designed to prevent a loss of confidence in the financial system.

The government’s emergency takeover of heavily indebted Yes Bank, announced close to midnight on Thursday, prompted its shares to close down 56 per cent.

The Reserve Bank of India said “it had no alternative” but to take control of the bank, replace its board and temporarily restrict withdrawals.

The RBI on Friday unveiled a draft plan that involves the State Bank of India, India’s largest government-owned bank taking a 49 per cent stake in Yes Bank. Indian authorities have set out a 30-day deadline to complete the rescue.

The RBI urged depositors not “to panic”, saying it “assures the depositors of the bank that their interest will be fully protected”.

At a Yes Bank branch in south Mumbai, police had set up barricades allowing the 50-odd depositors gathered there to enter the building only one by one.

Neeraj Singh, who has a corporate account for his nearby photography shop, was fielding anxious calls from colleagues as he waited to be allowed to withdraw Rs50,000 ($678), the maximum sum permitted by the RBI. But he was unsure about how he was going to get out the rest.

SBI’s stock closed down 6.8 per cent and the broader Sensex index was 2.3 per cent down, also on concerns over the spread of coronavirus. The Indian rupee fell as much as 1 per cent against the dollar.

Analysts are concerned the crisis could further strain India’s financial system. Shares in HDFC Bank and ICICI Bank closed down 1.5 per cent and 3.7 per cent respectively.

Yes Bank has struggled for months to raise capital to shore up its balance sheet, after being hit by its exposure to shadow lenders such as housing finance groups Indiabulls and Dewan, as well as Anil Ambani’s now-bankrupt Reliance Communications.

“It’s not a surprise that [the RBI] is stepping in,” said Gaurav Arora, Asia-Pacific banking head at research firm Greenwich Associates. “You cannot let a bank like Yes Bank go down.”

The RBI said recent credit rating downgrades of Yes had triggered “the invocation of bond covenants by investors and withdrawal of deposits”.

It added that a company and “market-led revival plan” had been the RBI’s preferred option.

“In the absence of a credible revival plan, and in [the] public interest and the interest of the bank’s depositors, [the RBI] had no alternative,” its statement said.

The late-night action mirrored other recent interventions, such as the late 2018 takeover of shadow bank IL&FS. A decision last year to restrict withdrawals from a small co-operative bank led to crowds of worried depositors. 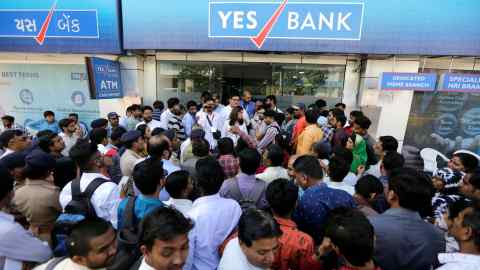 “While Moody’s expects the Indian authorities to take steps to prevent the weakness in the bank’s viability from significantly impacting depositors and senior creditors, the lack of co-ordinated and timely action highlights continued uncertainty around bank resolutions in India,” she said in a statement.

Yes’s shares have fallen more than 80 per cent over the past year. The bank had been in talks with investors, including turnround specialist JC Flowers.

The lender’s problems have become one of the most pressing issues for financial authorities, as they try to address a wave of bad loans that has already led to some non-bank lenders collapsing.

The RBI previously found that Yes had under-reported its bad loans in its most recent financial year, as well as in 2016 and 2017. It forced the bank’s chief executive, Rana Kapoor, to step down last year.