Imbued with a love of history, the fair’s guest artistic director is set to inject flair into the event

Paris Biennale can feel like an invitation to time travel. Famed for its supply of older art and antiques, the fair has invested increasingly in contemporary art in recent years, with pieces made centuries apart brought together under the majestic glass and steel roof of the Grand Palais.

Nothing appears to delight this year’s guest artistic director at Paris Biennale, Jean-Charles de Castelbajac, more than the happy “accidents” that result. “I remember seeing a drawing by Calder next to a Louis XV armchair,” the French fashion designer enthuses on a recent afternoon in the exhibition space, as the gallery booths are being erected nearby.

De Castelbajac has form when it comes to mixing old and new. Descended from a noble Gascony family, he has become best known for his whimsical, Pop art-inspired creations — think a coat made of teddy bears, or a Muppet dress — and bright splashes of primary colours. Over a half-century career, he has also worked with an unlikely array of collaborators, from Keith Haring to Pope John Paul II, Lady Gaga to Hello Kitty.

The latest is Pierre-Jean Chalençon, whose personal collection of pieces connected to Napoleon forms the centrepiece of this year’s Paris Biennale. As artistic director, de Castelbajac was tasked with designing the exhibition space, which is directly under the Grand Palais’ central dome. He has taken the job to heart: when I arrive to greet him, he is perched on a crane — his fear of heights notwithstanding — underneath a carousel of oversized banners which he has designed to float, tent-like, over Chalençon’s exhibition.

It’s vintage de Castelbajac — quirky and colourful yet informed by history, specifically Napoleon’s military tents. The structure required special permission from the Grand Palais, which doesn’t normally allow anything to hang from its airy dome. Each banner is adorned with a Giacometti-like silhouette depicting a member of the French emperor’s inner circle, from his first wife Josephine to the diplomat Talleyrand.

“I came up with a story,” de Castelbajac explains. “It’s 1804, the emperor summons me to Fontainebleau and tells me: ‘Castelbajac, I need to send you to 2018. My image has become outdated, I’m getting competition from luxury conglomerates, there are logos that have become more famous than my monogram.’ I wanted to create a concept store with a new logo for Napoleon.”

The emperor might not have recognised the result, but the Syndicat National des Antiquaires (SNA), the organisers of Paris Biennale, didn’t bat an eyelid, de Castelbajac says — a sign that the venerable fair is ready to take risks after a rocky few years. A faking scandal in 2016 and declining attendance left it fighting for its place on the major fairs’ circuit, and bringing in a guest artistic director is part of SNA president Mathias Ary Jan’s drive to rejuvenate its reputation.

De Castelbajac’s contribution is focused on Chalençon’s exhibition; the gallerists design their own booths, but he opted to paint the aisles a shade of “18th-century grey — really intense”. The designer is at home with antiques: he grew up surrounded by “ageing” 18th-century family furniture, with a few Louis XIII pieces thrown in. “It was a school of deportment,” he says.

As a young man, however, he was caught up in fast-changing times: he moved from Limoges, the home of the porcelain, to Paris in 1968, as a revolutionary spirit took hold of the capital. “It was liberation for me. Everything was upside down,” he says. He embraced punk and, later, street art, becoming friends with Malcolm McLaren and Jean-Michel Basquiat and making a name for himself with absurdist fashion designs in the 1970s and 1980s.

Still, his love of history always lurked in the background, fostered by a family tree spanning over 10 centuries. With a friend, he used to go and spend nights on historical battlefields, from Agincourt, where the English scored a victory during the Hundred Years’ War, to Sekigahara in Japan. “It was a way to live dangerously,” de Castelbajac says with a laugh. “We loved beautiful failures, people who had picked the wrong side.”

De Castelbajac is himself a collector, and is especially fond of flags “with a story”. His finds range from a banner embroidered with Marie-Antoinette’s hair, which belonged to Count Henri de la Rochejacquelein, to makeshift Viet Cong flags made of children’s pyjamas. In 1993, he bought the medieval castle of Loubersan, in Gascony, which belonged to his family in the 14th and 15th centuries, and furnished it with musketeers’ tables and 16th-century canopy beds.

His career has had its ups and downs. As minimalism took hold of the fashion world in the 1990s, de Castelbajac’s stock nosedived. He sold the company bearing his name to a South Korean conglomerate in 2011, and is no longer involved with it (its current owner is Hyungji Fashion Group). “At one point I really wanted to exist as a fashion house, but I realised it’s not who I am. You have to be a brand more than a man.”

The man behind it all is happier, he says, collaborating on a wide range of projects, from clothing to art and large-scale installations, like his Napoleon “flag shop” for Paris Biennale. He’s currently artistic director of the streetwear brand Le Coq Sportif, and is proud of work, such as a mural for the Paris Orly airport, that some fashion designers might consider lowbrow.

“I like the idea of a commission,” he says. “I’m from a generation for whom creation was often associated with emotional torment but, as time has passed, my relationship with it has changed. I’m more at peace.”

He’s not about to retreat into the past. He is enthusiastic about the current era, in which wearing de Castelbajac is once again a fashion statement for the likes of Kanye West and Katy Perry. There are tentative plans to bring all his work under a new roof in 2019, in a kind of “cabinet of curiosities”.

He sees the same spirit of renewal in today’s Paris Biennale. “Sometimes, when you protect tradition too much, you can’t move forward. The secret is to learn from our mistakes. I think it’s a new, dynamic Biennale.” One walking a fine line between past and present, like a 21st-century marquis. 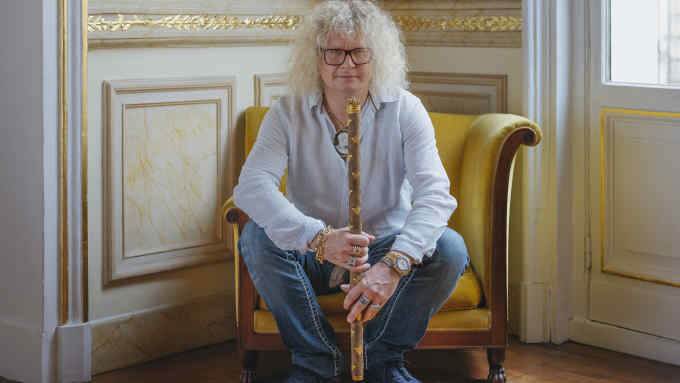