Get the newsletter now
Opinion Next Act 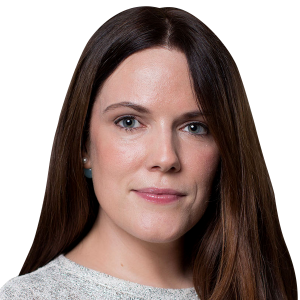 It’s morning in the US and the sun is rising on TV. I am up at 6am, ready to watch America’s most-viewed morning show saddle its horses and go Fox News-hunting. Onscreen, a skulk of presenters perch on a sickle-shaped sofa — bright eyed, bushy tailed. A silver fox, a foxy fox, a quick brown-haired fox. The foxes of Fox & Friends. Nimble, lithe, ferocious. They jackhammer the headlines with pneumatic speed and repetition; whomp the news into raw meat. Under their knees a chyron superimposes APOPLECTIC captions in CAPITAL LETTERS on to the lower section of the TV. A news ticker traces a continuous, cardiographic line across the screen. From time to time the foxes peer nervously into the camera and smile, as if to check their teeth still work.

No one has turned on our TV in over a year. As the screen heats up, there is a whiff of toasted dust. Ordinarily I’m the genre of millennial git who boasts they never touch the television. Subtext — I read Ulysses in bed every night. Loophole — I watch television, on my laptop. Unlike me, 88 per cent of Americans still turn on the television in an average week. And it stays on. For four hours 10 minutes daily, according to Nielsen’s latest Total Audience Report. Watching TV on the TV is still America’s hobby.

Why have I tuned in? Now I live in America, I want to get with the programme. The country is riven. Sundered by political divisions and the fervour with which they are felt. The acrimony is palpable and yet I can’t get inside it. Partly because DC — my home — is hermetic. A city with more street lights than registered conservatives. A town where immigrants don’t jump out of bushes at you. Where Barack Obama is not a Muslim. And George Soros doesn’t hide under your bed at night. And — even though I live minutes from the Capitol — the quickest way to get inside her politics is to just turn on the TV.

If everyone else in America is watching television, perhaps her small screen can explain her bigger picture. Or explain why the country is currently headlining its own reality show, guest-starring Kim Kardashian — a woman who didn’t know pickles were cucumbers — discussing sentencing reform in the Oval Office. I’ve exhausted all other avenues of explanation and illumination. Travelled the country. Read books. Listened to experts. Consulted fortune tellers. Fox News is my only hope.

For 202 consecutive months Fox has been the most-watched network in cable news. It is — officially — the hearth around which Americans are gathering to watch their country go up in flames. Now — me too. So far, the experiment has spawned more questions than it has solved. Like: if a tree falls in the woods and Fox & Friends isn’t there to report it, is it still the Hollywood elite’s fault?

A thrill of watching Fox & Friends is the possibility the President of the United States will dial in, thereby completing the infinite loop between politics and TV. When he does, the foxes joke around in the henhouse with Mr Trump. He lingered one day for the best part of an hour. The foxes nodded along for 45 minutes before the quick brown-haired fox politely jumped over the crazy demagogue, while the silver fox tactfully waved him off the air.

We cut to ad breaks. The commercials are as telling as the show they bestraddle. And alien. Especially to someone acclimated to British television. The American airwaves are glutted with ads for health insurance and in the lead-up to the US midterm elections there was a superfluity of political advertisements. Every ad seemed to feature a politico posing in front of a field of cows. British politicos aren’t allowed to pose in front of cows. They’re banned by rules that proscribe political parties from advertising on television. After hours of trying to detect a signal amid the deafening noise, I switched off and sat in silence.

In 2009 Norwegian TV aired — from start to finish — the journey of a train across the Bergen mountains. No commentary. Just seven hours of train. Almost 20 per cent of Norway watched. “Slow TV” was born. Two years later — when the 134-hour voyage of Norway’s Hurtigruten coastal express was broadcast live — half the country tuned in. Slow TV isn’t just slow, it’s largely silent. Turns out, in Norway — where there is low crime, strong social security and public health insurance — they like to watch boats quietly cruise about. Perhaps they’ve nothing left to say.