Mary Katrantzou shows a Greek Epic at the Temple of Poseidon

Philosophy and myths, for next spring/summer the designer turned to the ancients for inspiration

“This really is the most personal collection I have done to date,” said London-based Greek-born designer Mary Katrantzou after her Spring/Summer 2020 show.

Staged near her home city of Athens (the first time Katrantzou has shown in Greece since starting her label in 2007), the show took place at The Temple of Poseidon, a site built in 440BC which sits upon a tall ragged cliff overlooking the Aegean Sea. “I’ve always dreamed of having a show here,” said Katrantzou. “We only got permission from the Greek government in July. I had to turn this collection around in eight weeks.”

Here, Katrantzou presented her Spring/Summer 2020 collection — in lieu of appearing at London Fashion Week in September — but this time, the show was a charitable affair. Tickets were sold to the public, and donations were made to the Greek non-profit charity Elpida, a branch of the MVV Foundation — established in 1990, it is a children’s cancer charity which raises funds through cultural events, exhibitions and art auctions.

The collection and the show was a celebration of all things Greek; Katrantzou wove ancient philosophy, mythology, runes and symbols into each and every dress and cape. The first segment of the show was monochromatic. A dramatic floor length cape of silver and black fringing brought some pretty movement and one particularly mesmerising gown had eccentric rounded shoulders embroidered with the numerical sequence of Pi (the mathematical equation calculated to infinity) in never ending circles.

Then came a riot of colour and feathers. Tulle had been manipulated to look like the tentacles of an octopus via a technique called anthracite millefeuille; it was used on frothy pink and blue prom dresses with poofy skirts. One gown in vivid scarlet taffeta was twisted at the waist and fanned across the shoulder, and another ankle-length tunic was thickly encrusted in bright beading and resembled a mosaic.

Katrantzou also took the traditional symbol of medicine (a sword with two winding serpents that twist around its length) and placed it upon the breast of tunics in sparkling sequins that glimmered like metal as the models walked. On their feet, they wore custom shoes by Ancient Greek Sandals, another Athens-based brand.

Even the music had been specially designed to fit the magical setting, composed by Katrantzou’s long standing collaborator Vangelis; the tinkling tunes matched the slow and purposeful walks of the models and made it all the more ethereal.

Katrantzou’s grand, theatrical clothes have sometimes felt at odds with the more understated tone of London Fashion Week. They need an epic setting — and here they got it. 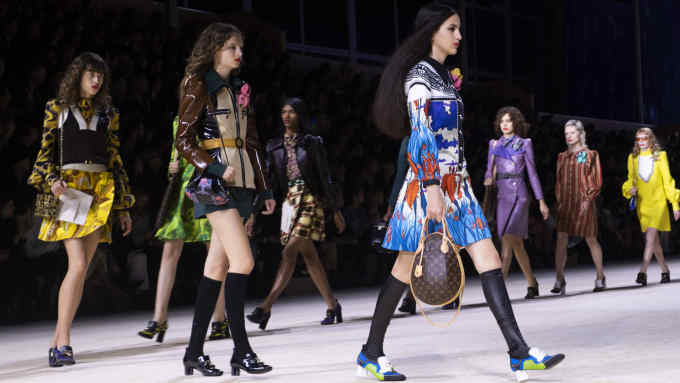