Eleven years ago, shortly before I became its director-general, the World Health Organisation and a group of more than 25 partners met in Washington to unveil a new strategy to rescue some of the world’s poorest people from four neglected tropical diseases.

Once widely prevalent, these diseases have gradually disappeared from large parts of the world, as economies developed and living conditions and hygiene improved. But they linger in the places left furthest behind by socioeconomic progress, blinding, maiming, disfiguring and debilitating their victims.

My own interest in this group of diseases was triggered by the sight of a group of women in Tanzania, suffering from elephantiasis (lymphatic filariasis). Elephantiasis can cause severe swelling in arms, legs, breasts or genitals. My heart went out to these women whose painful and disfiguring disease often results in stigma and social isolation.

Elephantiasis is one of the four most common diseases caused by worms. The others are river blindness (onchocerciasis), schistosomiasis, and soil-transmitted helminthiasis. All can be treated using the same set of low-cost drugs. These medicines do not necessarily stop infection from occurring, but they can help to reduce its transmission. They reduce suffering and stigma and have a positive impact on people’s lives, from improving children’s performance at school to protecting the economic productivity of adults.

Unfortunately, in the past, many people who needed these medicines were unable to obtain them. Even cheap drugs are unaffordable for the very poor.

During my tenure, I have seen an increasing number of pharmaceutical companies donating medicines for neglected tropical diseases, to the extent that 1bn people had access to free treatment in 2015 alone. The efforts, co-ordinated through the WHO, brought together agencies, pharma companies and other partners to provide these medicines at a cost of less than $0.50 per person per year.

The programme also addressed another critical barrier. Many at-risk groups live beyond the reach of effective health systems. The WHO and its partners needed to find a way to administer medicines without always having the support of health facilities or trained staff. We focused on simple interventions that could be managed by non-healthcare staff, requiring only once-yearly contact with the health services. Sometimes existing systems to deliver childhood immunisation, bed-nets for malaria, nutrition supplements or school meals were used to provide the medicines. Increasingly, communities themselves took on responsibility for drug delivery.

In 2012, the partners elevated the programme to a new level, meeting in London, to unite around a new set of ambitious goals to eradicate, eliminate, or accelerate the control of a wider group of 17 neglected tropical diseases, which were outlined in a WHO “roadmap”.

The London Declaration catalysed a massive expansion of support, including a donation of $363m by the Bill & Melinda Gates Foundation. The value of donated medicines that followed that meeting has been estimated at $2bn-$3bn a year. Equally important, other foundations and funding agencies have stepped up to support research to develop treatments and diagnostic tests. These neglected tropical diseases, so long starved of resources, were finally getting the support they require.

The tide is turning. Guinea worm disease, slated for eradication, has been reduced from 3.5m cases in 1986 to just 25 cases last year. Eradication would mark the first time in history an infectious disease has been vanquished through community engagement and behavioural change, without support from a vaccine or treatment.

But I am personally most excited to see that lymphatic filariasis is racing fastest towards the finish line. External reviews show strong progress towards elimination of this disease within the next few years.

In the midst of progress, however, we must recognise that medical interventions alone cannot solve the problem of neglected tropical diseases. A broader attack on the social, environmental and economic determinants of health is needed. The targets set for water supply, sanitation, nutrition and housing by the 2030 Agenda for Sustainable Development will have the largest long-term impact. On current trends, though, many of these ancient diseases may be brought to their knees before that 2030 deadline arrives.

Dr Margaret Chan is director-general of the World Health Organisation 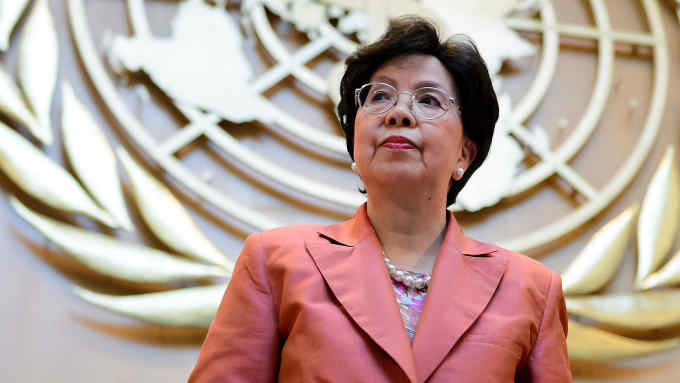