New livers, hearts, kidneys: the idea of one day being able to 3D print replacement human organs has been a dream for scientists working in the field of regenerative medicine. The ability to print whole organs is still in the distance but work is under way across multiple laboratories to print tissues of the liver, the most regenerative organ in the body.

Organovo, a company based in San Diego, has developed a bioprinting process that takes cells from donor organs and turns this into a printable bio-ink. Layers of cells are laid down in carefully calculated designs to build up small sections of liver tissue.

The company says bioprinted tissue could initially be used as a new way of testing drug safety. Currently, drugs are tested in animals or in clinical trials, which often carry risks. This could provide a new way to test new therapies.

“What was once a plot for a science fiction novel is now advancing our scientific research,” says Taylor Crouch, CEO of Organovo.

It could also be used more directly to treat patients. In December 2017, Organovo announced that the US Food and Drug Administration granted orphan drug designation, a special status given to a drug to treat a rare disease or condition, to its treatment of alpha-1 antitrypsin deficiency, a rare inherited condition, using the 3D printed liver tissue.

According to Ben Shepherd, director of therapeutics at Organovo, the challenges ahead are about increasing the size of the tissue that can be grown.

“We will be looking forward to expanding the physical size and nature of the tissues so that we can eventually work on paediatric and small adult size patients,” he says.

Also taking on the bioprinting industry is the Medical Research Council, a national funding agency leading the UK’s advancement of regenerative medicine. From 2010- 15, it increased its investment into regenerative medicine research by 80 per cent, spending £50m in 2014/15.

Professor David Hay is one of the scientists funded by the MRC Centre for Regenerative Medicine at the University of Edinburgh to work on generating 3D liver tissue.

Since October 2014, Prof Hay has led a £1.6m project developing 3D implantable liver organoids to treat chronic liver disease. He places human embryonic and pluripotent stem cells — that have the potential to grow into nearly every cell of the body — in tiny ‘U’ or ‘V’ shaped dishes in the lab to grow them into different types of tissue.

Stem-cell derived tissue is not recognised as “foreign” by the body, so patients implanted with this 3D tissue would not be dependent on the immunosuppression treatments so often required by patients who receive organ transplants.

Mr Hay’s team has had success in developing liver cells in this way, reaching a point where the cells can be kept alive for a year.

“The short to midterm goal would be looking at a ‘bridge’ to transplant. The long-term objective would be to create a liver implant that would provide liver support for longer,” he says.

The project also promises to have far-reaching implications on other areas of research. By creating 3D tissue in this way, Mr Hay’s team will be able to model disease and test drugs in the lab, like Organovo, offering multiple safe ways to design drugs that treat liver disease and aid tissue regeneration.

For Professor Stuart Forbes, director of the MRC Centre for Regenerative Medicine at the University of Edinburgh, the key is to restore the liver’s own regenerative capacity, rather than printing new parts outside of the body.

Part of his research involves looking at cells called macrophages — white blood cells that are normally involved in wound healing. Prof Forbes’ team found that macrophages are very effective at stimulating regeneration in the liver by breaking down scar tissue that accumulates during liver disease. These cells are now being tested in clinical trials; cells taken from a patient’s own bloodstream are matured into macrophages in the laboratory and then reinfused back into a patient with chronic liver problems.

“My research tries to understand the natural repair processes that the liver undergoes,” says Mr Forbes. “The liver is the most regenerative organ. If you can imagine, you can cut half of the liver away and it will grow back fairly successfully.

“The problem is in chronic injury where that regenerative capacity becomes overwhelmed. We’re faced with patients with cirrhosis or people with acute liver failure and it’s a huge burden in the UK and globally now.”

For Mr Forbes, learning to regenerate organs inside the body is a more fruitful line of research. “In theory, that’s an easier way of regenerating the liver, rather than growing something in a dish or printing a 3D structure. If the liver is severely damaged, the environment is not conducive to just plugging in organoids or 3D tissues,” he says.

In any case, the two approaches may need to work together, he adds. “I think that’s one of the challenges this field will have to face, even if it can engineer organs; are you going to replace a whole organ or can organoids interface with a damaged organ and produce a partial repair?”

This article has been amended to clarify that Organovo’s bio-ink is created using cells from donor organs rather than donor blood samples.

Get alerts on Scientific research when a new story is published 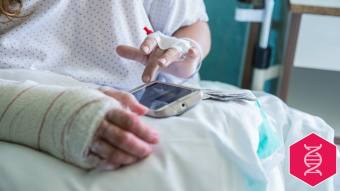