“Not natural shopkeepers.” That’s how Helene and Adele Adamczewski describe themselves. Neither are they shoppers, they say. Or clothes designers. Yet, against all odds, the mother-daughter duo have found themselves at the helm of a small East Sussex homewares empire – one where handmade pepper mills jostle with lambswool jumpers, and all who teeter on the doorstep are encouraged with a warm, resounding, “Come in!”

Perhaps the pair’s wariness toward retail is why Freight doesn’t really resemble a shop at all. It’s more like an extremely well curated living room – somewhere to warm yourself by the woodburner as much as a shopping destination. There’s an armchair for weary walkers, a courtyard for green thumbs and a fully functioning kitchen for making lunch, serving biscuits and showcasing products in action. It comes as no surprise that their most common request is: “Can I move in?”

Freight was launched in 2014 after the success of Popinski, a Christmas pop-up of a few months before. Helene had run her own store, Adamczewski, until 2010, but became frustrated with the monotony of trade fairs. “I’m not really interested in what’s out there,” she says. “I don’t want to be influenced by other people.” Adele, fresh from completing a master’s degree in architecture, proposed a new tack – to design rather than buy in.

Aside from a few carefully considered objects, everything in Freight has been designed and commissioned by its owners. Items are born out of a desire to make everyday actions more satisfying, and the aesthetic is unfussy. “We always work on the idea of stripping back,” says Adele. “You design something and then strip that back until you come to the purest form of what it should be.” Their latest design – a soap dish – has been crafted from unglazed stoneware to prevent slippage and has an underside bowl to stop the soap from sitting in water. Next on the list is a dustpan and brush, something that Adele says is “never quite perfect in how it works”.

It’s a similar approach when it comes to clothes, which are somewhere between “how a fashion designer and an architect might design something” – a combination of sketches, photograph tracings and red-dot line drawings. Other products are based on items found in junk stores or vintage shops: the bestselling cotton dungarees were developed from a 1940s pair salvaged by Helene. Fashion, however, is not Freight’s driving force but an appendage of the shop’s functional approach to living. “We’re not clothes designers,” asserts Helene. “Although I do get a ridiculous little frisson when I see somebody wearing something of ours that looks particularly good.”

The Adamczewski vision relies on a handful of small-batch makers, all of which are based in the UK. “We wanted to be able to go there,” Adele says. “We couldn’t imagine sending a design halfway around the world without being able to talk to someone.” It started with a trip to Stoke-on-Trent, the pottery heartland since the 17th century. A door-to-door search led them to a former Wedgwood apprentice who has been responsible for Freight’s ceramics ever since.

How To Spend It
Cult Shop: a landmark hardware-drome in Marseille 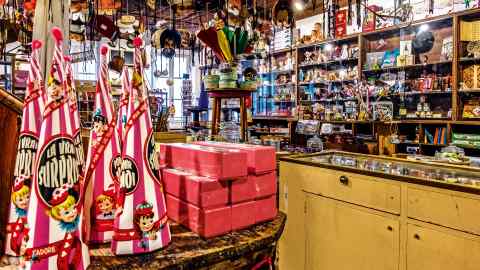 Last year, Helene and Adele took advantage of the “tumbleweed town” by moving stores – back to where it all began at 196 High Street, the site of Adamczewski and Popinski. “It was a funny world,” says Adele of the past few months. “We had paper on the windows, everything was mayhem, and we didn’t really have a plan.” The move gave Lewes the lift that it needed. “Everyone thought they’d come out of lockdown and the independent shops would all be gone,” she adds. “We’ve not only stayed, but have opened a better, bigger store that represents a resurgence of creativity. It was a moment of hope.”