An insider’s guide to the spooky charisma of Savannah

I moved to Savannah, Georgia, last year to begin a new life as an educator. Before that I lived for many years in New York, where I was an editor and fashion journalist. You couldn’t find two more different cities, but they have this in common. They both cast a spell.

Savannah College of Art and Design (SCAD), the university where I’m dean of the School of Fashion, is spread out across a series of buildings, some new, some renovated, all rather beautiful. My morning commute takes me on foot through the city’s historic district, past the tall, red-bricked mansions with their handsome Georgian façades, the lush, overgrown courtyards that wouldn’t look out of place in Seville or Marrakech, the hushed squares where sunlight glimmers through dense tangles of Spanish moss. Savannah is now home to a busy port, leading-edge industries like aerospace giant Gulfstream and a thriving, varied dining scene, but walking south along Bull Street towards Forsyth Park you still glimpse traces of the rarefied world John Berendt described so memorably in Midnight in the Garden of Good and Evil. There’s something else too. On every block, you’ll overhear ghost-tour guides assuring groups of dazed-looking tourists that Savannah is the most haunted city in America. And even if those guides are not the greatest truth-tellers you’ll ever meet, it’s hard to ignore the weird magic in these streets.

That’s never truer than during the holidays, when the double-height windows in those grand houses flicker to life with lighted decorations. No wonder shopping here is heavily focused on interiors. Asher + Rye and The Paris Market both offer a carefully chosen selection of contemporary housewares, one Scandi-influenced, the other leaning French. Savannah also has the kind of idiosyncratic stores that have been driven out of bigger cities by high rents. These include antiquarians like Arthur Smith and Arcanum, both with offbeat finds and even more eccentric opening hours, and overstuffed booksellers E Shaver and The Book Lady.

Cocktails are mixed with a bracing absence of Northern puritanism

When it’s time for a lunch break, The Collins Quarter at Forsyth Park offers a reliably good chicken quinoa salad and views of the park from its outdoor tables. Back in the Day Bakery is best for baked goods, Adam Turoni for chocolates. If I’m in the mood for an old-school Savannah experience, I’ll brave the line at Mrs Wilkes Dining Room, where visitors and locals sit at communal tables and share heaped portions of fried chicken, collard greens, black-eyed peas, okra and tomatoes, and other Southern staples. There’s a rumour that long-time residents skip the queue and pick up takeout from a secret entrance in the back.

SCAD is a presence in this town. The university has played an instrumental role in restoring and preserving downtown Savannah, and one of my favourite buildings is the SCAD Museum of Art, a railroad depot from 1853 that has been turned into a sleek, interconnected series of gallery spaces featuring leading contemporary artists. I’m excited to see Chase Hall’s searching figurative paintings in the new year.

Thursday is the big night here. Party-minded weekend visitors start to arrive, and cocktails are mixed with a bracing absence of Northern puritanism. Fridays tend to be slightly more relaxed. That’s when I’ll meet my wife at Savoy Society, a lively spot. Or we’ll go to the rooftop bar at the Perry Lane Hotel. With views that take in the blinking lights of the port, rooms that stop a millimetre short of being terminally over-designed and a private pool, it’s also the best place to stay in Savannah. Afterwards we might head down to the more laid-back Starland district for a casual dinner at Bull Street Taco or Vittoria Pizzeria.

HTSIHTSI’s 12 top picks from a year in travel
Colm Tóibín’s Wexford: ‘This is not an Ireland of tourist posters’ 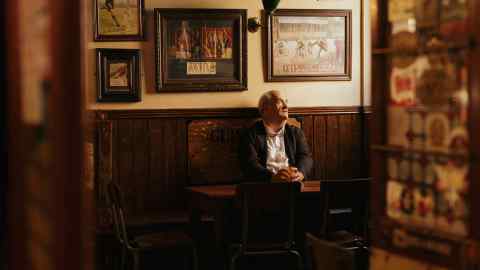 Ultimately, though, all culinary roads lead to The Grey, a former Greyhound bus terminal that has been transformed into a dazzling modern dining room with some of the most extraordinary food I’ve tasted in my life. Chef and co-owner Mashama Bailey’s take on what she calls Port City Southern food just won her the national 2022 James Beard Award for Outstanding Chef. In Savannah the past is ever-present. Bailey and her partner in The Grey, Johno Morisano, also have an eye on the future.