Time to bring the world’s plastic problem to the table… and the chair, and the vase

“In here, we’ve got half a Chubby chair. This is a prototype for a table leg and that’s an old coffee table from around 2010. Then there’s some CDs and CD cases – these ones are blue, which I love.” Pip Atkinson is Zooming me around the Zaandam studio of Dutch designer Dirk Vander Kooij. She’s sifting through what she calls a “consultation box” – a stash of plastic materials that will be repurposed as a bespoke MeltingPot table. “This is our garbage can, really. The funny thing is that it has also become our most valuable product. It really is a trash-to-treasure situation.”

For the past 10 years, Vander Kooij has been turning old refrigerators, garden furniture and agricultural pipes into modern design. The self-proclaimed craftsman-inventor’s Endless chair is constructed by a self-built robot from recycled-plastic string. He’s also created a collection of 3D-printed chairs, vases, lights and chandeliers from recycled materials, while his Chubby chair is made from molten synthetics that are squeezed “like toothpaste” into shape. This has made its way into the permanent collections of the Vitra DesignMuseum and The Design Museum in London.

Atkinson, a trained artist, is Vander Kooij’s partner and, for the past three years, chief MeltingPot table maker. “At first, they were quite rudimentary, a bit of a hobby project,” she says. “We once attempted to make one from old vacuum cleaners. That was less beautiful. But they are getting more magic as the years go on.”

The colourful tables, reminiscent of abstract paintings thick with impasto paint, have certainly found a following. There’s one in the Berlin home of South Korean DJ and record producer Peggy Gou, and another has just shipped to a royal client. Others are dotted throughout Valentino stores worldwide, while interior designer Sophie Ashby recently used two coffee tables in her design for the penthouse at Holborn’s Hexagon Apartments. Just as importantly, though, they are also a highly aesthetic solution to the world’s pressing plastic problem.

Just how pressing this issue has become is brought home by Katie Treggiden in her new book Wasted. “Since industrial-scale production gained traction in the 1950s, we have produced 8.3 billion tonnes of plastic,” writes Treggiden, who highlights the design innovators who are rethinking recycling. “Just nine per cent of all the plastic ever produced has been recycled. Another 12 per cent has been incinerated. That means that 79 per cent (some 6.6 billion tonnes) of that plastic is still with us, either in landfill or in the wider environment.”

We once attempted to make a table from old vacuum cleaners

In our oceans, microplastics are so pervasive – some 14 million tonnes of the broken-up pieces are thought to have settled on the ocean bed, alongside the great country-size masses that float on the surface – that it’s not only marine life that is being affected. The biodiversity of soil is being altered by its presence. And “93 per cent of American adults tested each year are found to have BPA [a chemical used to make plastic] in their bodies”, Treggiden says.

As a material to tap into, second-hand plastic is certainly abundant. Nike declares that since 2010 it has diverted more than 7.5 billion plastic bottles from landfill into its sports gear. Adidas, meanwhile, has partnered with environmental organisation Parley for the Oceans, and pledged to use 100 per cent recycled polyester by 2024.

While the issue is being tackled with the same focus in furniture design, the tendency has been to look for organic, renewable alternatives to plastic – but there are notable exceptions. Australian designer Brodie Neill’s 2016 Gyro table is made up of more than half-a-million beach-salvaged fragments (used to make a material he calls “Ocean Terrazzo”) and can now be found in the National Gallery of Victoria surrounded by Turner paintings. He has since gone on to use the same material to create the sinuous Flotsam bench (2017), while his Capsule hourglass (2019) poignantly replaces sand with grains of microplastic.

Neill’s exploration of composite materials is cited as an inspiration by Charlotte Kidger, a designer-maker whose colourful, curious objects were part of the London Design Fair’s presentation of plastic as the “Material of the Year” in 2018. Shown alongside the work of Vander Kooij and vessels blown like glass from plumber’s piping by Japanese designer Kodai Iwamoto, Kidger’s textural tables stood out precisely because they look nothing like plastic. “People think they’re concrete,” she says, showing me around her compact Camberwell studio, where she mixes polyurethane foam dust with hand-dyed resin, which is then shaped using traditional casting techniques.

“The dust is a by-product from a CNC [computer-controlled machining] factory in the Midlands that mainly makes models for architects, artists and filmmakers,” Kidger continues. “It can be incinerated, but I think this practice could be ruled out at some point because of the fumes. So I was like, ‘OK, great, here’s this problematic material, let’s try to do something with it’.”

Kidger’s experiments have led to a made-to-order range – she says she is “swamped with orders” – but she also works to commission, and has created a window display for Browns’ South Molton Street store, as well as a series of 100 sculptural orbs for Birch hotel in Hertfordshire. The rough-edged offcuts from the latter were repurposed as tactile surrounds for mirrors, while her latest project is a series of uncharacteristically smooth vessels in shades of chartreuse for Relay Design Agency’s Arcade Collection. “I put them on a woodworker’s lathe – which I had never used before,” she says.

Manufacturing companies from Rotterdam-based Plasticiet to Smile Plastics in south Wales are creating raw materials to rival marble and granite as tabletops, kitchen worktops or bathroom sink surrounds. In Amsterdam, Pretty Plastic is transforming uPVC windows and gutters into exterior cladding that has already been used in buildings in the Netherlands. Meanwhile, in Brighton, Gomi is turning would-be landfill into desirable Bluetooth speakers and portable chargers – powered sustainably by reclaimed batteries.

“The guys behind Gomi came to visit us in Eindhoven a few years ago,” says Mattia Bernini, head of design for Precious Plastic, a global non-profit project aimed at boosting plastic recycling. “They took our knowledge, built their own machine – and then they really pushed the design side of things to the next level.”

Precious Plastic was founded in 2013 by Dave Hakkens as an extension of his graduation project in industrial design – a recycling machine, for which he posted all the instructions online. “In the past five or six years, we have developed this beautiful community of thousands of people who are collectively working towards finding solutions to the plastic-waste problem,” says Bernini, adding that they count actor Jaden Smith among their supporters and have collaborated with Dutch department store De Bijenkorf.

It was a Precious Plastic display of waste material – alongside a sign reading “Hi designers! Help us turn this crap into valuable things!” – that caught the eye of gallerist Rossana Orlandi. In 2018, she launched the RoGuiltlessPlastic project to showcase the work of material innovators and “stimulate the design world to dedicate itself to this new type of production”. Last year she added the Ro Plastic Prize. The Conscious Innovation Projects category was won by Hakkens, while the Design prize went to 26-year-old student Alexander Schul, whose elegantly simple Substantial chair is wrought from sheets of recycled polystyrene packaging (produced by Smile Plastics). Crucially, the design is “easily manufacturable”, says Schul. “I hope to have created a scalable process that transforms once-disposable plastic packaging into long-lasting and aesthetic pieces of furniture.” On 3 December, this year’s prize for Industrial Design was awarded to Greek collective BlueCycle for its ombré bench constructed in a rehashed mix of polypropylene, polyethylene and nylon from fishing and shipping activities.

Architecture
Why tomorrow’s architecture will use yesterday’s materials 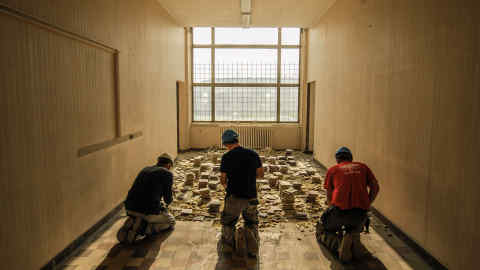 But is all this design innovation a mere drop in the ocean when the Great Pacific Garbage Patch, with its 1.8 trillion pieces of plastic, is growing 10-fold decade on decade? When companies such as Mars and Keurig Dr Pepper reported that in 2019 less than one per cent of their plastic packaging was made from recycled materials? When the situation has only been exacerbated by a pandemic and an uptick in single-use plastic?

“The environmental repercussions will last well beyond any vaccine that puts an end to the pandemic,” says Neill. “We work with scientists, and when they tell you the state of things it makes you want to cry. But we need objects that shine a light. Our designs are not an answer to the quantity that’s out there, but they show people that these materials have the potential. They’re objects of hope.”