Have you got the right personality for the gig economy?

May 2, 2017
Print this page
Experimental feature

People such as myself were precursors of the new gig economy.

I began working life conventionally by becoming an occupational therapist. But when I discovered that life in an organisation only provoked the dread that I had felt at school, the determination to go it alone led me to become a stand-up comic, then a psychotherapist and an Alexander Technique teacher, and eventually also a freelance journalist. In the early days when I found myself in dire financial need I resorted to clowning at children’s parties.

When choosing a career path, most people land somewhere along a continuum between the need for security versus the need for control over their lives. It is only human to be conflicted and long for the advantages of both.

As many companies are providing less in terms of security, rewards and benefits, individuals are having to set their sights on the new gig economy. Their success will depend as much on their psychological strengths as their skills and experience.

Those with extreme dependent personalities gravitate towards the structure and close relationships inherent in organisations. This can be a haven particularly for insecure or emotionally fragile individuals who need the assurance they receive from managers to compensate for their lack of self-belief. Some may even rely on colleagues to make up for a lack of, or damaged, family life.

Those in the other camp who struggle with authority or the emotional upheavals of organisational life tend to be drawn to self-employment. If an office dispute or getting on the wrong side of your boss feels like an existential threat, then going it alone can be a relief.

Such individuals will need emotional maturity and resilience to tolerate the many insecurities, uncertainties and setbacks that inevitably arise. The hope of having control of one’s life can come crashing down when lack of work leads to panic and fear of destitution. Just as employment can disappoint with its promise of security, so the self-employed can find themselves unable to control their time and finances.

An experienced social worker told me how he gave up his secure job with the hope of succeeding as a television writer, but the choice was far from simple.

“I feel myself to be a mixture of both aspects in that I don’t like authority and working in organisations, but I’m insecure,” he explains.

He now spreads himself out as a professional trainer, university lecturer, counsellor, and television writer.

He describes the fears he had when making his career leap. “If I could talk to a younger part of myself, I’d say: ‘Brace yourself’. When you run out of work and money, what you feel is, ‘I’ll never work again, I’m essentially unemployable’. All those voices start to speak to you. It’s like walking a tightrope — I sometimes feel like at any stage I can fall.”

The biggest shock, however, was the loss of his professional identity and status as a senior social worker. “You have nothing to hold up to the world when people ask what you do,” he says. “You don’t know how naked you feel until you take off the uniform.”

David Archer, who co-founded the Socia consultancy, which specialises in helping organisations with collaboration, agrees that organisational life appeals to people who need to belong to something bigger than themselves. Those who have a strong sense of their own identity and want to find their own set of values, however, work best when self-employed.

Those who tend to go adrift when starting out in self-employment, Mr Archer says, are the individuals who strongly identified with their previous company — those that “even had a strong identity with the brand and almost literally wore the sweatshirt, and always talked about what a great organisation they worked for”.

Many people begin life with the security of family, school and university, which does little to prepare them for the isolation and uncertainty of the gig economy. Dealing with these difficult feelings is challenging. There is little appreciation that a degree of support and security are crucial for risk-taking, managing change and being creative.

Michael David, a young musician from Los Angeles has achieved some success with his band Classixx, but began a separate company, Dart, to compensate for the insecurities of the music industry. Dart provides live musicians and DJs for private events. His biggest problem, however, is that he is unable to disconnect from his work.

“The moment you turn your app off, or put an ‘away’ message that you’re unavailable — there’s a rabbit hole of events and missed opportunities that is hard for people to disconnect from,” he explains.

He envies his friends in the corporate world who are able to separate work from their personal lives, and have a “psychological holiday”.

“They can make this distinction when they’re off work. People that exist in a gig economy can’t make that distinction. You have to be very disciplined to be able to do that.”

The writer is a psychotherapist, family therapist and business consultant

Get alerts on Self-employment when a new story is published 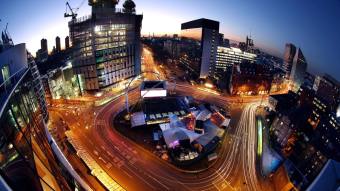