Many counterfeit goods are now of better quality than the genuine articles, Alibaba founder Jack Ma has said in comments set to infuriate luxury goods makers who accuse the Chinese ecommerce group of profiting from the sale of knock-offs.

“We have to protect [intellectual property], we have to do everything to stop the fake products, but OEMs are making better products at a better price,” Mr Ma said, referring to original equipment manufacturers that typically make products for branded sellers.

“The problem is the fake products today are of better quality and better price than the real names,” he said during a speech on Tuesday at Alibaba’s headquarters in Hangzhou. “They are exactly the [same] factories, exactly the same raw materials but they do not use the names.”

The remarks were an apparent riposte to longstanding criticism that Alibaba has tolerated the sale of counterfeit goods on platforms such as Taobao. Mr Ma called on brands to accept that the “way of doing business has [been] changed” by the internet, creating new opportunities for Chinese factories that have traditionally supplied the likes of Apple and Louis Vuitton.

LVMH, the luxury group controlled by Bernard Arnault, and Kering, the Paris-based luxury group that includes brands such as Gucci, Bottega Veneta and Saint Laurent, both declined to comment on Mr Ma’s remarks. But the founder of one Italian luxury goods company said: “I am stunned by his comments.” He declined to be named.

Last year Kering launched a lawsuit against the Chinese ecommerce group, alleging that it encouraged and profited from the sale of knock-offs on its platforms.

In May, Alibaba was suspended from the International Anticounterfeiting Coalition, a watchdog for the retail industry, over similar concerns about knock-offs.

Mr Ma also delivered another message to western luxury brands that have suffered a fall off in demand in China: that Chinese manufacturers are growing impatient with a global division of labour in which they make high-quality goods only to see much of the money pocketed by brand owners.

Instead, Chinese producers were looking for ways to make their own products and sell them directly to consumers, using the internet for marketing, he said.

“The way of doing business has changed for the brands. It’s not the fake products, its not the IP that is destroying them. It’s the new business model that’s revolutionised the whole world,” said Mr Ma.

“You can’t stop Alibaba for two hours otherwise it’s going to be a disaster for China. You can stop Tencent for two days, you can stop Baidu for two weeks and everything will still be OK,” he said referring to Alibaba’s two closest competitors.

Ecommerce
Fakes give Alibaba chance to turn crisis into opportunity 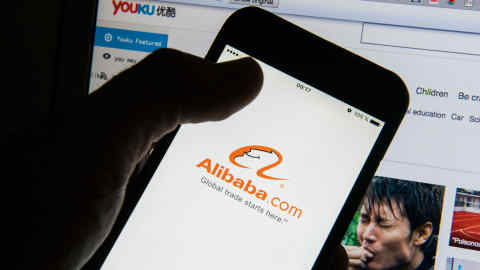 In April 2015, Alibaba launched a programme to help Chinese factories develop their own brands dubbed “Zhongguozhizao” or “Quality made in China” in an effort to discourage them from producing counterfeits.

Following Mr Ma’s speech on Tuesday, Alibaba released a further statement by the company founder saying that his remarks were not intended as a defence of counterfeiters. “This is simply my observation of the issues facing brands and OEMs. Counterfeiting is not a quality problem; counterfeiting is an intellectual property problem.

Alibaba added that it expected to nearly double transaction volumes to more than $900bn by 2020. Mr Ma said he expected Alibaba to become the “fifth largest global economy” after Japan by 2020, measured in the company’s total transaction volume.