‘King dollar’ surges as Fed presses ahead with rate rises

Nikou Asgari in London and Kate Duguid in New York

The dollar is on the cusp of its third straight month of gains after reaching a 20-year high against peers, in a stark reflection of diverging outlooks for interest rates and growth in the world’s largest economies.

The dollar index, a measure of the currency’s value against a basket of others, has risen 14 per cent since the start of the year. It has continued to climb on expectations that the Federal Reserve will not back down in raising US interest rates to tamp down inflation, as emphasised by its chair Jay Powell at the annual Jackson Hole symposium last week.

The US currency’s lead on others also reflects worries that soaring energy prices in Europe stoked by Russia’s war in Ukraine will drive inflation higher and push economies into recession.

“Everything is pointing towards a stronger dollar,” said Christian Kopf, head of fixed income at Union Investment. “The dollar is independent from energy imports and not that much struck by the rise in energy prices that we’ve seen particularly in Europe.”

August will mark the third consecutive month that the dollar has risen, while sterling and the euro have dropped 7.4 per cent and 6.6 per cent respectively over the same period. Japan’s yen and Switzerland’s franc are down 7.1 per cent and 1.5 per cent over the same three-month period.

The Fed has led big central banks in forging ahead with aggressive monetary policy tightening. Higher yields on US government bonds push the dollar up as investors sell debt denominated in other currencies in favour of the better premiums on US Treasuries.

The yield on the two-year Treasury note, which moves with interest rate expectations, on Tuesday hit its highest level since 2007, at 3.497 per cent. 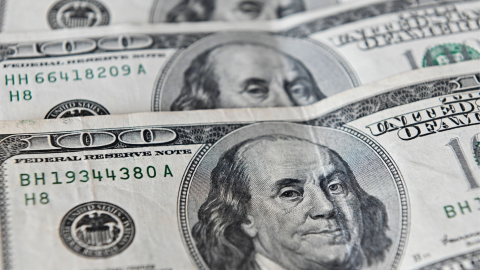 Higher yields, and the strong dollar that accompanies them, have also hurt emerging market economies. This is partly because of the flow of capital away from their assets into dollars, but also because many emerging market countries hold debt denominated in dollars. A stronger dollar means higher debt payments for those countries, which has prompted some investors to predict a wave of defaults.

Energy prices have hit record highs in Europe as the region searches for natural gas supplies that would otherwise come from Russia. The EU is preparing to announce emergency measures to tackle the region’s spiralling energy costs as businesses and households struggle.

“It doesn’t appear that they can really put up a decent fight against king dollar when we’re looking at this really sour backdrop,” Jane Foley, head of FX strategy at Rabobank, said about other major currencies. “If you’re going to sell the dollar, what are you going to buy?”

The stress is unlikely to abate soon. US inflation hit 8.5 per cent year on year in July, easing slightly from the previous month, though the Fed remains focused on its target of 2 per cent inflation. Eurozone inflation rose to a record 9.1 per cent in the year to August, according to data published on Wednesday.

Powell cemented his “unconditional” commitment to tackling high inflation last week, delivering a hawkish message at Jackson Hole and quashing any doubts that the world’s most powerful central bank would soon ease its monetary tightening.