Climate summit at risk of ending without a deal

We’ll send you a myFT Daily Digest email rounding up the latest COP27 news every morning.

Climate negotiators are locked in a stand-off in frantic eleventh hour talks at the UN climate summit in Egypt in a bid to agree a new deal for rich countries to provide financial support to poorer nations.

The summit was due to end on Friday but negotiators said they would continue talks over the weekend in an effort to strike an agreement.

On Friday, the EU said it would support a new fund for “loss and damage” to help poorer countries as long as the donor base of contributing countries was broadened.

But China, the world’s worst polluter, has resisted suggestions that it should contribute, despite pressure from developed economies. The US has also held off backing the EU proposal.

The lack of response from the US to the EU proposal was “stark”, said Preety Bhandari, a senior adviser at the World Resources Institute, adding that it was “a deafening silence”.

The situation was further complicated by US climate envoy John Kerry testing positive for Covid. The 78-year-old’s condition was “mild” and Kerry was self-isolating, spokeswoman Whitney Smith said late on Friday.

“He is working with negotiations team and foreign counterparts by phone to ensure a successful outcome of COP27,” she added. Kerry reportedly had several hours of talks with Chinese counterpart, Xie Zhenhua, the day before.

Annalena Baerbock, Germany’s foreign minister, said that while wealthy industrialised countries should lead the effort to fund a new loss and damage facility, others should also contribute.

“We need a financing system that includes the biggest emitters,” she told a COP27 press briefing, in a thinly veiled reference to China. “We know how tremendous this task is.”

The EU proposal stipulates that the money must go only to the most vulnerable nations, and that countries must commit to more ambitious action to cut greenhouse gas emissions.

China and Saudi Arabia have resisted the suggestion that they should contribute to international climate financing despite their substantial economic growth over the past three decades.

However, a person familiar with the talks said they were “optimistic” that the US and EU could reach a “joint position”. The EU would not accept a compromise that did not see the donor base increased in some way, they added.

“If we get a breakthrough . . . I think a lot of other things will fall into place,” said Alden Meyer, a UN climate negotiations expert at think-tank E3G.

“I am here to appeal to all parties to rise to this moment and to the greatest challenge facing humanity,” said the UN secretary-general António Guterres. “The world is watching and has a simple message: stand and deliver.”

The summit has so far made little progress from the agreement at the COP26 summit in Glasgow last year.

The Paris agreement of 2015 was the first to set out the aim of cutting greenhouse gas emissions enough to keep global warming well below a 2C increase from pre-industrial times, and ideally 1.5C.

This year’s summit looked set to reaffirm the 1.5C target for global warming, which was also endorsed by G20 leaders in Bali this week. 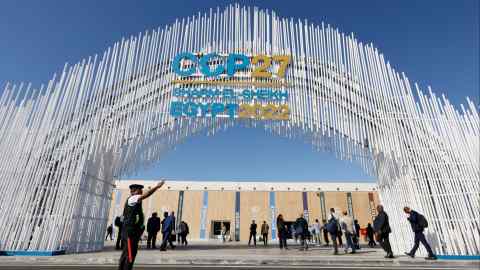 The summit has so far failed to reach agreement on the scope of a “work programme” designed to cut emissions faster in the years to 2030.

Separately, a proposal by India that the final agreement cover the phase-down of all fossil fuels, rather than coal alone, has not made it into the final draft.

The establishment of a new UN-organised carbon offset market appears set to be delayed into next year, as little progress has been made at COP27.

“My initial reaction is that it is a bit concerning,” said Tom Evans, from think-tank E3G. The draft text over which countries are negotiating “does not represent a move forward” from last year’s COP summit in Glasgow.

Some delegates criticised Egypt’s leadership of the conference.

COP27 president Sameh Shoukry held meetings with country blocs throughout Friday. Delegations “made us know how they felt”, said COP27 ambassador Wael Aboulmagd. “Not everyone was completely happy.”

The Egyptian team was “following a very clear game plan”, he added.