Eye-catching locations around the city exemplify its modern ambition

The £17m Museum of Making opens in September at Derby’s renovated Silk Mill, regarded by many as the world’s first fully mechanised factory.

The mill began operation in 1721, the creation of John Lombe and his half-brother Thomas. It opened its gates after John indulged in industrial espionage to glean how Italy’s Piedmontese spun strong yarn from silkworm silk.

The museum is part of Derwent Valley Mills, a Unesco world heritage site.

The museum is set to have 50,000 artefacts, from the world’s smallest engine (run by human hair) to a Rolls-Royce Trent 1000 aircraft engine. It will have programmes where people can learn about skills such as cabinetry and welding, along with workshops equipped with computerised machine tools and 3D printers.

Entrepreneurs will be able to start a business in a co-working hub. BG

Completed in 2013, this was the first Grade A office space to be built in Derby in two decades.

A speculative venture, costing £20 and led by London developers Lowbridge, the building stood empty for about two years.

In 2015, it became home to the University of Derby’s law and social sciences department — arguably a sign of rising self-confidence in the city’s higher education sector.

Its copper box design resonates with the history of Derby and its surrounds. Old copper mining works in Derbyshire date back to the 17th century.

Sources of funding included the city council’s regeneration fund and private wealth in Monaco, an indication of foreign investors taking an interest in Derby’s development. PC

The new manufacturing district of Infinity Park is located on the southern edge of Derby. Its most striking building is the iHub, which opened in 2017. The curved glass walls and shared atrium events space emphasise its aim to promote collaboration among its tenants. The £12m, 45,000 sq ft building hosts research and technology companies seeking the next breakthrough in the aerospace, automotive and rail sectors.

Derby council and central government paid for the building to encourage growth in start-ups. Its location in an Enterprise Zone brings tax breaks and free superfast broadband.

It contains an “iLab”, equipped with 3D printers and software to enable the rapid creation of prototypes for new products and services.

Steve Barbour, managing director of Composite Braiding, which has developed a lighter, stronger form of composite material for industry, says: “The iHub provides a combination of modern workshop and office space, ideal for a manufacturing start-up . . . it is also close to our transportation and infrastructure target markets.

Housing the old turntable where railway engines were — as the name might imply — turned around, this superbly restored building lays claim to being the world’s oldest surviving railway roundhouse.

It dates back to 1839. By comparison, north London’s Roundhouse, now an entertainment venue, came into operation in the 1840s.

Four rival rail companies joined forces to build it. These included the North Midland Railway, for whom George Stephenson, often known at the “Father of Railways”, was an engineer. His son Robert was in charge of the engineering for the Roundhouse site.

It is the home of Derby College further education centre. Teaching ranges from GCSE to full degree level, with programmes worked out in consultation with potential employers.

The Roundhouse’s space is hired out for events from weddings to beer festivals, to stagings of BBC television’s Question Time. PC

Get alerts on Derby when a new story is published 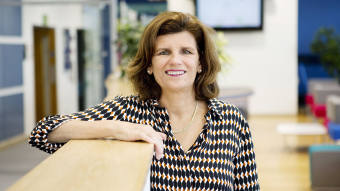