A lot has changed in the asset management industry over the past four years, but one aspect has remained the same: the high number of women reporting sexism or sexual harassment in the workplace.

Findings from FTfm’s third Women in Asset Management survey show that two-thirds of female fund staff have regularly experienced sexism at work, up from 65 per cent in 2014.

A quarter of female respondents have experienced sexual harassment at work, up from a fifth in 2014.

The feedback from the 460 respondents to the survey supports findings from previous years, which have undermined the notion that asset management represents the softer side of financial services.

A senior male employee at a US investment boutique, who participated in the survey, says: “I worked for 12 years as a trader and portfolio manager. Sexism was always rampant. The habit of male bonding at strip bars is pervasive.

“One could argue that, strictly speaking, these are extracurricular activities. But when they routinely happen after a desk dinner, or after the closing dinner of a conference, it becomes clear that the camaraderie affects professional relationships in the office as well.

“Those men who choose not to participate in those male-bonding exercises are disadvantaged just as much as the women who have to deal with the more typically discussed sexist prejudices that exist in the office.”

The findings from the survey, which polled male and female staff globally, also show that nearly a fifth of women have felt pressured to exploit their sexuality in a professional context. Nearly two-thirds of women also say they believe men are paid more in similar roles.

Many executives at the top of the industry say they are saddened by such feedback but insist it does not reflect their own experience of the sector, which they believe has improved significantly over the past decade.

Elizabeth Corley, vice-chairwoman of Allianz Global Investors, one of Europe’s largest asset management companies, says she has not experienced sexist behaviour in the industry “for years”.

But she acknowledges she may be shielded from the worst behaviour due to her seniority. “The more senior you become, the more you are accredited gender-free status. If you are relatively senior in your [company], you may not see everything that is going on,” she says.

Brenda Trenowden, chairwoman of the 30% Club, an organisation that campaigns for greater gender diversity on boards, and head of the financial institutions group at ANZ, the Australian bank, is less surprised by the findings.

Ms Trenowden, who has worked with asset management companies throughout her career, says: “I do think the culture in some of the asset managers is old style and I know anecdotally a lot of women who have found the culture has not suited them and ended up leaving the industry.

“The old client-entertainment culture that was so big years ago was often quite masculine and did not suit lots of women. It is changing, but it is not changing fast enough.”

Many women who participated in the survey flagged problems around sexism and discrimination they feel cannot be discussed openly with senior management or in a public forum.

Nearly a third of the female respondents say they have considered leaving the asset management sector as a result of how women are treated.

A senior woman in the industry, speaking on condition of anonymity, says: “I have seen every part of the asset management industry during the past 20 years. As time has gone on, I have [become] more and more cross about how it treats women.

“When I started out, I accepted it was a male environment. You get to your mid-30s and people assume you are going to have kids and not take work seriously. At meetings, women get ignored. There are practices that make the job for a woman twice as hard. If I ever spoke out publicly, I would be unemployable.”

The head of marketing at a midsized European asset manager adds: “I am expected to do more administrative tasks, such as booking rooms and setting up calls. I have been introduced as ‘the girl who makes the tea’ and asked to attend meetings to ‘add some glamour’. This kind of behaviour undermines my work and reduces the respect I receive.”

Asset management companies are not blind to these problems, and are beginning to take steps to address them.

Last week FTfm revealed that seven of the world’s largest fund houses, including BlackRock, Fidelity International and Capital Group, have for the first time agreed to share data on how many women they employ at different levels. This marked a breakthrough for the industry in terms of its willingness to publicly recognise the lack of women in senior roles, and commit to tackling the issue.

A number of asset management houses have also introduced initiatives to support women, such as unconscious-bias training for managers, which aims to eliminate prejudices in decision making; mentoring schemes for talented female employees at a junior level; and support networks for women returning to work after maternity leave.

Despite such efforts, 42 per cent of female fund staff say there has been no progress for women in the industry over the past five years. Only a quarter of female asset management employees say the situation has improved.

A senior employee at a large UK asset manager says: “I have seen multiple cases of female fund managers being made redundant around the period in their life when they get married and have children, cutting their careers short. It is awful and unnecessary.”

Another female asset manager adds: “My experience of being pregnant, taking time off and then returning after having a baby changed the way I viewed my employer. They told me it was clear that I was no longer ambitious or fully capable and made me redundant as a result, and kept on the more junior [male] contractor they had hired to cover my maternity leave.”

Daniel Godfrey, former chief executive of the Investment Association, the trade body for fund managers in the UK, believes adopting more flexible working initiatives should help women in the industry, although that alone will not go far enough.

Companies
Britain lags behind in female board hires 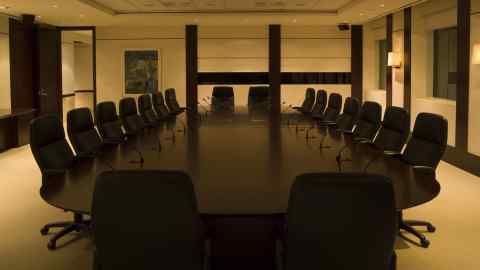 He says: “There are many initiatives that could be implemented in asset management to make it a more woman-friendly career. And these, like more flexible working, are relatively easy to do. But the real hard miles are going to be how the industry changes the unconscious biases that can create an unpleasant environment for women, sometimes on rare occasions, but sometimes as a matter of unpleasant routine.”

One of the solutions supported by more than half of the female respondents to the survey is the introduction of quotas to get more women into senior roles at fund houses.

The diversity statistics published last week in FTfm showed women often account for nearly half of the workforce at the world’s largest asset managers, but typically only represent a quarter of senior staff.

A senior employee at a small UK asset manager, who believes quotas should be introduced, says: “Overtly sexist behaviour and harassment is much less frequent now. Many organisations have made a huge effort to reset the culture so that this is now seen as unacceptable.

“However, the overall culture remains problematic. Men still recruit other men and engage in alpha-male behaviour as a way to progress. Women’s abilities are virtually irrelevant in this context.”

Women are far less likely to hold senior positions in the fund industry than men, even in departments where female employees outnumber their male counterparts, according to new research.

The study by Fondsfrauen, a network for women in Germany’s fund industry, and KPMG, the professional services firm, found that women account for 91 per cent of employees in the human resources departments of asset management businesses in Germany, but hold only 47 per cent of senior roles.

A similar story plays out in asset managers’ marketing departments, where women make up three-quarters of the workforce, but hold only 41 per cent of senior positions.

Anne Connelly, managing partner at Fondsfrauen, says: “Despite there being many women in certain areas [of asset management], they are still not making it to the top in equal numbers. We need to look into why they are not advancing even when there are more of them in the pipeline.”

The figures also show women hold 19 per cent of roles in portfolio management divisions, but account for only six per cent of senior positions in that department.