Could this boat win the Vendée Globe?

Sailing into the teeth of hurricane winds and concussive waves deep in the southern oceans, Alex Thomson has absolute faith in his boat. Thousands of miles from land and the nearest human assistance, all that lies between the round-the-world yachtsman and the ferocious elements is a wafer-thin shell.

The hull of Hugo Boss, an 18.3m dream machine named after its title sponsor, is made from two layers of carbon fibre, each barely 1mm thick, glued either side of a foam and honeycomb core designed to absorb the crashing impact of the towering waves. The boat builder whose team laid every strip of carbon in this audacious yacht is Jason Carrington, director of Carrington Boats Limited and himself a world-renowned sailor.

The two men first got to know each other in Melbourne when Carrington was racing in the 2005 Volvo Ocean Race and one of Carrington’s crewmates was dating Thomson’s sister. “I immediately liked Alex,” Carrington recalls. “He was very confident and really into sailing.”

It wasn’t long before they worked together – Carrington managed the build of the first Hugo Boss for Thomson to race in the Barcelona World Race 2007. By the time Thomson came to commission a new boat for the 2020-21 Vendée Globe, the single-handed, non-stop, unassisted round-the-world race that takes place every four years and is known as the Everest of the seas, he knew exactly who he wanted to build it.

“Jason was the only choice for us. Alex Thomson Racing (ATR) is a British team, we wanted to build in the UK and we’re aiming to beat the French,” says Thomson. “Jason is one of the most talented boat builders in the world. He is a perfectionist and you can’t buy that kind of passion.”

This machine is completely and utterly customised to me

The result is a cutting-edge yacht in glossy black with a neon-pink coachroof, keel and rudders. From the top of its mast to the tip of its keel, the boat is custom-made to compete at the sharp end of the Vendée Globe. The course starts at Les Sables d’Olonne in western France, heads down the Atlantic, crosses the Indian and Pacific Oceans via the Cape of Good Hope and Cape Horn, before tearing back up the Atlantic for a total of 21,638 nautical miles, equal to the circumference of the Earth. Thomson sums it up in three words – “relentless, brutal, all-consuming”.

Thomson is a veteran of four Vendée Globe races – a holed deck and a cracked hull put paid to his first two attempts; he took third place in 2012-13 and was runner-up last time (he would almost certainly have won were it not for a broken foil). So he had a clear vision for the new boat, which was designed and built in a partnership between the ATR technical team, naval architects VPLP, and Carrington Boats. “I am very involved in every single element, from the concept to the ergonomics,” he says. “This machine is completely and utterly customised to me and my height, my weight, my philosophy, my thinking… everything.”

It’s the nautical equivalent of buying a car and insisting the steering wheel is moulded to the size of your hands, the driver’s seat tailored to your curves and the pedals matched to the soles of your shoes. “It’s always clear in meetings that Alex is the boss,” says Carrington. “He knows exactly what he wants, and that’s refreshing.”

Not that the pair always agree; but with ATR’s design manager Peter Hobson embedded with Carrington Boats throughout the build, pinch points could be quickly resolved. “We have had confrontations,” Carrington says. “I definitely don’t just roll over. But Alex also knows that I’ve sailed in the southern oceans and I know what he is going to have to deal with. I understand that any mistakes we make here could have a terrible effect on him out there.”

Each intricate detail of the £6m Hugo Boss has been meticulously built to calibrate performance and reliability, the point in boat building where engineering meets art. “It would be easy to build a boat with a massive safety margin,” explains Carrington, “but it would be too heavy to win.” He even created the boat’s Boss logo from silver carbon so it could be an integral structure, saving paint and weight.

The 7.7-tonne Hugo Boss “flies” on hydrofoils that lift it above the water to sail at wildly fast speeds. Its pioneering design places the cockpit inside the boat to protect Thomson from winds and six-storey waves, an arrangement that compelled Carrington to channel all the control lines, halyards and sheets into the watertight cocoon. Thomson, meanwhile, will rely on deck-mounted cameras and an array of sensors to sail. 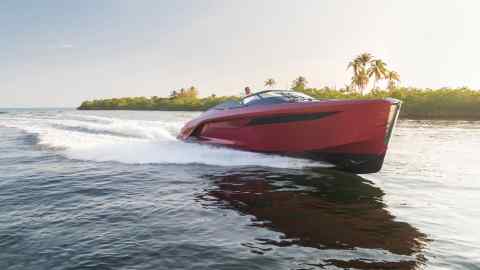 He has also opted for solar power in addition to the traditional diesel engine, an eco-friendly approach that saves fuel, but which forced Carrington to find a last-minute, waterproof solution to attach around 100 solar panels to the boat’s carbon structure. “Suddenly we had all these penetrations to make through a composite structure, which is inherently delicate. It’s not as if you can just get a drill bit and pierce through,” says Carrington, diplomatically. “Solar saves carrying all that diesel and, environmentally, it’s the right thing to do, so we were all for it. But at the end of a build when you are under pressure, you don’t really need extra jobs.”

Throughout the build he and Thomson spoke regularly on the phone – friends and partners in a mission for a British skipper to win the Vendée Globe for the first time (the French have won every edition to date). And now, with the start only hours away, Thomson is impatient to set sail. “It’s been four years coming, with four years of preparation, and I’m itching to get on with it,” he says. “I can’t wait to let the reins off Hugo Boss and show everybody what this beast can do.”