This is the spectacular, unsettling mise-en-scène — do the coloured lights batting the keep-out whiteness denote Union Jack or Stars and Stripes nationalism, or the Tricolore’s libertarian ideals? — for some of the most beautiful, yet ambivalent, depictions of the black figure made this century: Derek Fordjour’s new paintings, which will appear in a solo show at Josh Lilley gallery.

Extreme times demand extravagant art. Earlier this year Fordjour’s “Half Mast” — a billboard mural depicting law officers, students, civilians, some marked with targets, others abbreviated to shadows, in a compressed space lit up with garish balloons and teddy bears (signifiers of memorials to mass shootings) — splashed across New York’s Whitney Museum façade. The Whitney called the piece “a portrait of this divided moment in US history”.

Fordjour belongs to a group of African Americans, in their late thirties and forties, whose inventive approaches to black narratives are revitalising figurative art, and, in 2019, are achieving unprecedented institutional support and exposure. At Tate Modern next week, Kara Walker becomes the first black artist to take on the challenge of the enormous Turbine Hall. Three weeks ago, Wangechi Mutu’s “The NewOnes, will free us” — monumental sculptures of queenly black women draped in coils of abstracted garments and jewels — in­augurated New York’s Metropolitan Museum Façade Commission. Njideka Akunyili Crosby’s painting of black domesticity “Remain, Thriving” towered over Brixton Underground Station for six months from September 2018.

All four artists star in London-based commercial exhibitions launching during Frieze — a chance to understand a compelling, optimistic shift in America’s cultural landscape.

The House Always Wins, the title of Fordjour’s show, describes its casino/fairground mood while hinting at underlying oppressions: however gifted the gambler, the house edge — the white establishment? — ensures he gets a poor deal from a rigged system.

Kara Walker takes the opposite approach. Reprising with deadly intent the 19th-century feminised, decorative style of the flick-book silhouette, she orchestrates black cut-paper figures into elaborate room-sized installations and moving image tableaux, recounting the brutality of slavery and its psychological and political legacies through majestic plays of shadow and light.

Sprüth Magers’ From Black and White to Living Colour: The Collected Motion Pictures and Accompanying Documents of Kara E Walker, Artist features film highlights from the past 15 years. Including a vast head swallowing up black stick figures and a slave mating with King Cotton to produce the plantations, “8 Possible Beginnings or: The Creation of African America, a Moving Picture by Kara E. Walker” contours episodes of sex and violence into scenes of frightening beauty, some narrated by a girl raped by her master and intoning “I wish I was white.”

In “Fall Frum Grace: Miss Pipi’s Blue Tale”, a Southern belle’s black lover is beaten, castrated, killed; a tragedy shot though with joyful vignettes including a top-hatted dancer and a human-bicycle hybrid. “Testimony: Narrative of a Negress Burdened by Good Intentions” is a black revenge fantasy.

There is fairy tale simplicity, graphic elegance, horror aestheticised, in Walker’s world of tyranny amid the mansions and swamps of the ante­bellum South. Dazzling and devastating in how form imitates subject, Walker manipulates puppets as black bodies were manipulated in and by history. Trauma is narrated through what she calls the “sweet violence in the act of cutting”. Blackness is nothingness — a silhouette is made by “the paradox of removing a form from a blank surface that in turn creates a black hole”.

Unsurprisingly, she is controversial, including among black artists. In 1999, Betye Saar, founding figure of American black feminist art, condemned Walker’s work as “revolting and negative …basically for the amusement and the investment of the white art establishment”. Howardena Pindell says Walker is “catering to the bestial fantasies about blacks created by white supremacy and racism.” “The work is difficult because the history is hard,” Walker says.

Who owns black experience? Arguments across the generations play out at Victoria Miro’s group show, Rock My Soul, curated by Isaac Julien, of black women artists including Saar, 93 — the collages on washboards “We Was Mostly ‘Bout Survival” — and Pindell, 76: “Slavery Memorial: Lash”, a collage piece whose central section of criss-crossed chains and diagrams of crammed slave ships is flanked on one side by African masks, on the other by lists of African-American inventors.

Saar and Pindell are conceptual, multi­media forerunners. For visual punch today, the exhibition poster girl of the politics of visibility is Wangechi Mutu’s “She Walks”, a thrusting, twisting, two-metre figure in red soil, silver oak, charcoal, paper pulp, steel nails and synthetic hair, soaring on huge platform shoes. It is a cousin of the empowering Met bronzes, and like them it alludes to both western and African sculptural traditions.

Terrific too in fusing dictions and histories is Akunyili Crosby’s nearly four-metre wide “Remain Thriving” for Brixton, the most monumental, confident painting at Victoria Miro. It typifies this artist’s paintings of black figures in exquisitely detailed domestic settings built on collage and photographic transfers of tiny fragments from newspapers — imagery weaving politics indissolubly into private scenes. 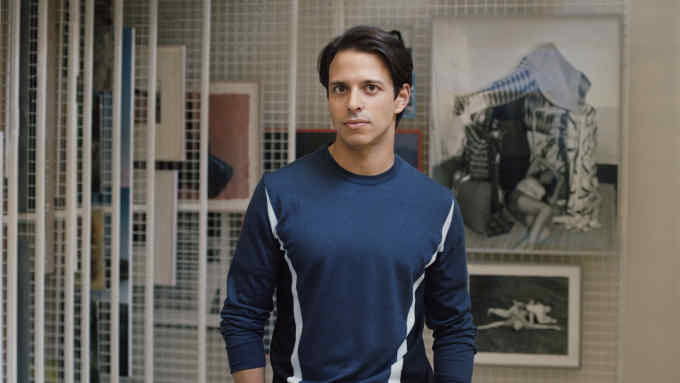