The best cycling routes in Frankfurt and its rugged surroundings

In many ways, Frankfurt is an ideal cycling city. It is small and flat — with a normally mild climate. In practise, however, after five decades of car-centric urban planning, Frankfurt’s cycling infrastructure is far from perfect. But things are changing.

In 2019, one of the busy artery roads dividing the historic old town from the river Main, which runs through the heart of the city, was closed to car traffic. After a tenacious campaign by local cycling activists, the city government has also pledged to improve cycle paths and rein in car traffic over the coming years.

Feature
Explore our city guide:Frankfurt with the FT 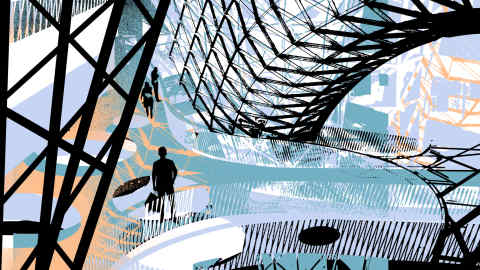 Several bike sharing schemes are available for easy access to a two-wheeler — among them the Deutsche Bahn’s Call a bike, Visa-sponsored NextBike, Lime and Byke.

This all increasingly makes the bike the perfect tool for visitors to get around and see the city — or find some quiet time after an arduous day of meetings.

This 14km route starts on the southern side of the river Main and connects the city’s key sights — among them the ECB’s shiny new headquarters in the east end and the historic old town in the city centre that was completely flattened in two bombing raids in 1944. It has been carefully rebuilt over the last few decades, with the medieval city hall, Römer, at its core.

You’ll pass one of the city’s nicest bars and restaurants: the Margarete, which is your correspondent’s recommendation for coffee and cake — or a (liquid) lunch — the restaurant has its own microbrewery that produces the town’s best beer, Frankfurter Helles. Owned by a young, entrepreneurial couple, the place is bustling all day, offering a modern variety of food with locally-sourced ingredients. (If you plan to go for lunch or dinner, make sure to have a reservation as vacant tables are hard to come by.)

Next, the route takes you past the birthplace of parliamentary democracy in Germany, the Paulskirche, where the first democratic parliament convened in 1848.

The bustling market hall, Kleinmarkthalle, is worth a visit too, and where you can try regional, award-winning wines from Rollanderhof winery on the lovely first floor balcony. It is here where your Frankfurt correspondent, on a hot summer afternoon, lost his deep-rooted prejudice about the (presumed) inferiority of German wine.

If you’re still able to ride a bike afterwards, have a look at Frankfurt’s historic stock exchange building and cycle past the FT’s Frankfurt office in Westend Carree to one of the city’s many parks, the Grüneburgpark, and the Palmengarten, the city’s main botanical garden. 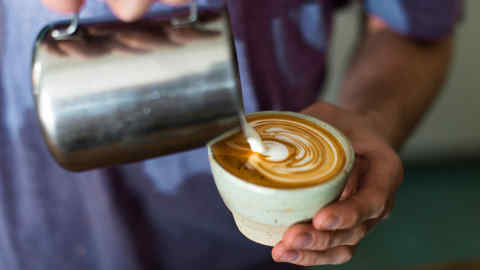 One of the city’s finest cafés, the Café Siesmayer, is nearby. It opens at 8am, making it one of the earliest places outside of hotels to have a proper breakfast — and their home-made cakes are some of the best in town.

On the way back, you’ll pass the iconic, mirrored headquarters of Germany’s largest and crisis-prone lender, Deutsche Bank, before entering the city’s notorious red light district, the Bahnhofsviertel. While this heritage is still visible, the area is perfectly safe and has become a hub of the city’s arts scene.

Cycling beyond the centre

If you find yourself in Frankfurt for a longer visit, it’s worth also exploring its surroundings by bike.

The forest and river route

My default route for a quick after-work ride is from Sachsenhausen, south of the river, through the Frankfurt city forest, to Kelsterbach and back via the cycle path following the river Main. Most parts of the 28km loop are on paved and car-free roads.

In the summer, at roughly the halfway point, you will come past the Kelsterbar, an open-air beach bar right by the river Main, offering drinks, food and a nice location for a break.

Frankfurt also has plenty of woodland on its doorstep with the Taunus, Spessart and Vogelsberg mountain ranges all in striking distance.

The edge of the Taunus mountain range is just 25km north-west of the city centre. With this 62km route, it’s possible to climb the 900m Großer Feldberg mountain on an after-work ride. If you want to avoid the first 15km of urban sprawl, take the train to Oberursel.

The Odenwald mountain range to the south is a tad further, but even more peaceful and remote. A nice cycle route starts in the Bavarian city of Miltenberg, which can be easily reached in just over an hour by train from Frankfurt Süd station with one change in Aschaffenburg.

After the lovely baroque town of Amorbach, a demanding but beautiful climb into the wooded mountains will make you think you took a detour and made it to Norway. Make sure to stop at Forsthaus Eulbach for refreshments. The food is rustic German cuisine with a modern touch, while the beer, Büble, sourced from a brewery in southern Bavaria, is very good.

From there, you can jump on the train in Babenhausen or cycle your way back to Frankfurt. Watch for the skyline on the horizon on the final descent.

Get alerts on Business travel when a new story is published