Renault pulls out of China joint venture as sales disappoint

David Keohane in Paris, Peter Campbell in London and Christian Shepherd in Beijing

Renault has decided to stop selling petrol cars in China, pulling out of its lossmaking joint venture with Dongfeng and reversing a strategy put in place with great fanfare by former boss Carlos Ghosn.

The French carmaker said on Tuesday morning that it had an agreement with Dongfeng to sell out of the 50-50 joint venture between the two partners, Dongfeng Renault Automotive Company (Drac).

The sale will also transfer full control of its plant in Wuhan, which was opened by Mr Ghosn in 2016, to Dongfeng and mean that Drac will stop selling Renault-branded cars.

“We are opening a new chapter in China. We will concentrate on electric vehicles and light commercial vehicles, the two main drivers for future clean mobility and more efficiently leverage our relationship with Nissan,” said François Provost, chairman of the China business for Renault.

A late arrival to the Chinese market, Renault has struggled to make a dent compared with rival mass market producers such as Volkswagen and General Motors.

Fellow French group PSA, which owns Peugeot and Opel, has also performed poorly in the market, as has Italy’s Fiat Chrysler.

The Chinese market is expected to slow further this year due to the effects of the coronavirus pandemic.

Renault is one of the carmakers hardest hit by the virus, shutting plants throughout the world and considering taking out bank loans guaranteed by the French state worth up to €5bn to see it through the crisis.

Renault will continue to service existing vehicles through the network of dealerships owned by its global alliance partner Nissan. It will focus on light commercial vehicle business with Brilliance China and on EVs built by its joint venture with Jiangling Motors.

The decision to quit the most prominent part of its Chinese business comes after a disastrous year that saw Renault’s profits wiped out, with the carmaker seeking to cut costs by €2bn.

Renault’s shares were up 3 per cent in early morning trading in Paris after the announcement, but have fallen 54 per cent so far this year. The French state is Renault’s largest shareholder with just over 15 per cent. 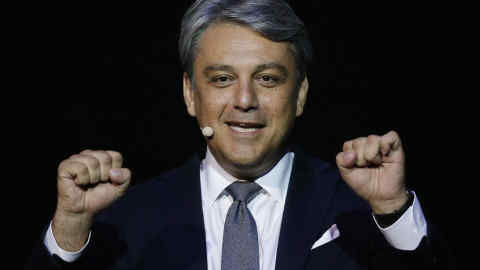 The decision to pull out of the joint venture with Dongfeng was taken before the coronavirus hit markets, say people at Renault, but it is also being taken before new chief executive Luca de Meo takes the reins this summer.

The Italian former Volkswagen and Fiat executive was appointed earlier this year, almost one year after the ousting of former boss Mr Ghosn, who is in Lebanon as a fugitive from the Japanese judicial system.

Get alerts on Renault SA when a new story is published