We use cookies (opens in new window) for a number of reasons, such as keeping FT Sites reliable and secure, personalising content and ads, providing social media features and to analyse how our Sites are used.
Manage cookies
Accept & continue
Saudi Arabia

As new arrivals hurry through Riyadh’s airport, Ahmed hustles for customers, hoping to lure travellers into his saloon car.

One of hundreds of thousands of Saudis who studied in the US on a government-funded programme, the 30-year-old mechanical engineering graduate has yet to find a job which he spent years training for. Instead, he makes an uncertain living, operating an illegal airport taxi, risking fines from the police.

“The economy is bad, where are the jobs?” he says. “All my friends are cursing the government.”

His generation’s travails highlight the peril of reform for Deputy Crown Prince Mohammed bin Salman, who, just a few months ago, was hailed as a vibrant contrast to Saudi Arabia’s previous generations of gerontocracy. The powerful prince has spearheaded plans for economic diversification as the kingdom grapples with low oil prices. His vigour for bold reform was matched by his determination to check Iran’s regional influence by launching an air campaign against the Islamic republic’s proxies in the war in Yemen.

But under the 31-year-old’s stewardship, the Middle East’s largest economy has plunged to the brink of its first non-oil sector recession for three decades. Unpaid government invoices have savaged business confidence; cuts to public sector workers’ benefits have hit consumer spending; and Saudi Arabia’s expensive intervention in Yemen has cost lives and triggered international opprobrium.

Education in the Arab world

Education in the Arab world takes many forms, from vocational training for Syrian refugees to online courses taught in Arabic. We also look at how Saudi Arabia’s education system is going to cope with a big budget cut

“The honeymoon is indeed over,” says one fund manager. “There has not been one bit of good news for the government — from the economy to the disaster in Yemen.”

The domestic grumbling is ramping up pressure on Prince Mohammed as he oversees a highly ambitious reform programme intended to wean the kingdom off its dependence on oil and develop the private sector to create jobs for young Saudis. His plans are laid out in two documents, “Vision 2030” and the National Transformation Plan [NTP], which were released to much fanfare earlier this year.

Many Saudis acknowledge the need to transform the kingdom and understand the impact of low oil prices on the economy. But voices of dissent are emerging over the means and pace of change.

“At least everyone is in the same boat, but we could really do with the money back,” says Nasser, a teacher. His pay has declined by around 7 per cent to $1,400 a month due to an estimated $17bn cut in September to 3m Saudis’ public sector benefits.

The government this month set aside $27bn to settle some of its debts to private sector companies, belatedly responding to the fact that delayed payments have made it hard for contractors such as Binladin Group and Oger, large construction companies, to pay staff and creditors on time.

Officials privately acknowledge it was a mistake to withhold payments given the knock-on effect it has on state-dependent companies that have been starved of new contracts.

“The economy requires a stimulus package that will help bring back growth, investments and increase confidence,” says John Sfakianakis, an economist with the Gulf Research Centre. “It’s important to avoid sharp cuts.”

The government’s austerity measures have driven non-oil growth down to 0.07 per cent in the second quarter, compared with 3.5 per cent last year. The prospect of more reductions to fuel subsidies, pension cuts and a Gulf-wide sales tax from 2018 are further dimming the outlook and risks sparking more anger. 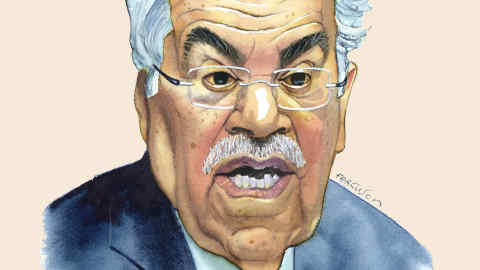 Reports that Prince Mohammed recently splashed out €500m on a superyacht has already soured opinion.

Wealthy Saudis have also been moving billions of dollars outside the country amid pessimism about its prospects, financiers say.

Bankers say progress will be made on privatisation and public-private partnerships next year, which should help bolster the economy. But such measures could also be controversial in a country where the state has dominated.

The sense of drift in the economic reform plan comes amid rising popular disapproval of the foreign consultants — such as McKinsey, Boston Consulting Group and PwC — that have been drafted in to reshape the country.

“Vision 2030 is a joke,” says one veteran Saudi observer. “When people attack McKinsey, that’s a proxy attack on the man who brought them,” he says, referring to Prince Mohammed.

McKinsey responded to the criticism last week in a rare statement in Arabic in which it denied it had produced the Vision 2030 document.

The transformation plan identifies 543 initiatives across 24 ministries and government bodies to implement this year that will cost Riyadh $72bn. But government advisers say the plan’s budget is likely to be slashed by around 30 to 40 per cent.

One ministerial employee who submitted a budget for his initiative in March has been asked to submit alternative plans with cuts of up to 50 per cent. He is still waiting for the final allocation, pushing implementation way into 2017.

“I don’t think I will hang around, time to go back to the private sector,” he says.