Jamie Smyth in Sydney and Peter Wells in Hong Kong

Australia’s economy grew more than expected in the fourth quarter, delivering a boost to the government of Malcolm Turnbull in an election year and defying fears over the impact of China’s slowdown.

Gross domestic product grew a seasonally adjusted 0.6 per cent quarter-on-quarter in the three months to the end of December, thanks to a boom in household consumption and higher government spending. On an annual basis GDP grew 3 per cent, back to its long-term trend rate and ahead of economists’ consensus estimate for 2.5 per cent growth.

“Today’s GDP results confirm the resilience of the Australian economy, thanks to a rebalancing of activity away from mining investment into the services sectors,” said Jasmin Argyrou, senior investment manager at Aberdeen Asset Management.

The strong growth figures pushed the Australian dollar up as much as 0.7 per cent to $0.7224.

The biggest contribution to fourth-quarter growth came from household and public spending, adding 0.4 percentage points and 0.2 percentage points respectively, according to the Australian Bureau of Statistics.

A decline in private sector spending, however, wiped 1.9 percentage points off growth, reflecting the slowdown in new engineering construction following the end of a decade-long mining investment boom.

Over recent months some commentators have warned that a slowdown in China, Australia’s largest trading partner, and steep falls in commodity prices would dent the country’s growth and even threaten its near-record run of 24 consecutive years without a recession.

The economies of Canada and Brazil have both shrunk in the face of lower commodity prices and steep falls in mining investment. But a weakening currency is fuelling a boom in Australia’s services exports and a rebound in manufacturing, with Ai Group’s purchasing managers’ index showing manufacturing activity last month grew at its fastest pace since 2010.

“This is the strongest pace of through-the-year growth since the March quarter of 2014 and is consistent with the strength of job creation in the second half of last year,” said Scott Morrison, Australia’s treasurer. 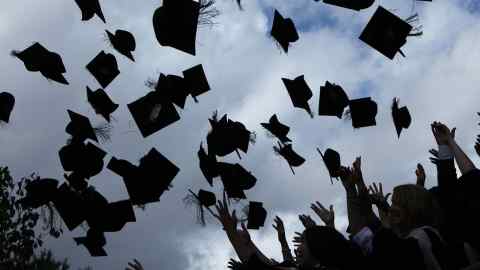 The bureau revised upwards its growth figure in the third quarter from 0.9 per cent to 1.1 per cent. Analysts said the stronger than expected growth figures suggested the Reserve Bank of Australia was likely to continue to leave interest rates on hold for longer.

“As a consequence [of the result], we expect the RBA will leave the cash rate at 2 per cent for at least the remainder of this year,” said Ms Argyrou.

But some economists warned the headline data presented too optimistic a view of economic fundamentals and warned challenges and threats to growth remained.

“We should be cautious given the poor quality of the growth, which was driven by a rise in government spending and household expenditure that relied on a run down in savings,” said Andrew Ticehurst, rate strategist at Nomura.

He said living standards were continuing to fall in Australia, despite the growth in GDP, with real net disposable income per capita declining 2.3 per cent year on year.