Law firm leaders force pace of change to stay ahead

Stephen Immelt at Hogan Lovells and Roger Meltzer at DLA Piper on pushing for change. Plus: most innovative law firms ranked — overall, business of law and legal expertise

The overall top innovative law firm in this year’s Financial Times ranking for North America proves that innovation is a journey.

Hogan Lovells has appeared consistently in the top 10 of the FT’s annual rankings in Europe and Asia as well as North America but until now it was always a bridesmaid, never the bride.

The breakthrough comes after a deep transformation.

The firm is the result of a transatlantic merger in 2010 between Hogan & Hartson in the US and Lovells in the UK. Stephen Immelt, the current chief executive, took office in 2014 when the strategy to put innovation at the heart of the business began.

We needed to start changing

Project Redefine, as it was dubbed internally, was Mr Immelt’s way to consolidate the merger and build a legal firm with a difference. “The pace at Hogan Lovells needed to pick up. If you are training for a marathon and you know the cut-off time is three-and-a-half hours, you need to run a mile in about eight minutes.

“I felt we were at a 10-minute-mile pace. It was not just about the lawyers. It was about the organisation. We needed to start changing,” says Mr Immelt, who steps down next year.

Project Redefine consisted of 18 workstreams and 35 global initiatives designed to overhaul the firm’s infrastructure and processes to create a culture of innovation. The workstreams looked at different aspects of company operations but not all were “great ideas” and some were abandoned, says Mr Immelt.

Others have stuck, notably an intense focus on industry sector groupings rather than practice areas as a way to service clients better by more efficiently pooling the firm’s knowledge and experience. Hogan Lovells credits this tactic for the 50 per cent increase in the number of clients spending more than $5m a year on its services. In 2017, the firm posted more than $2bn in annual revenues, so joining an elite group of 10 international law firms.

While Hogan Lovells shows how adopting an innovation strategy can bear fruit for law firms, it still struggles — like its peers — to achieve gender balance in the business. Despite women being in 40 per cent of its leadership positions, only a quarter of the partners are female.

Diversity in general continues to be a critical challenge for the North American legal profession, although it now has a greater priority. Few, however, have been as thoughtful or gone as far as DLA Piper, which is fully funding and collaborating with the NYU School of Law Center for Diversity, Inclusion and Belonging. Together, they are exploring and challenging accepted wisdom on the reasons for lack of diversity in the profession and devising new training in response.

“It is unfathomable that law firms are prepared to sit still and compare themselves to low levels of success, and that it was OK because it was the same for everyone else,” says Roger Meltzer, DLA Piper’s global co-chairman. “I felt we had to be at the cutting edge of what was going on. If we do not drive social change, we would lose the battle for talent.”

The firm has moved beyond the now-common training in unconscious bias and now gives its partners different insights and perspective on what the NYU Centre calls the “3As: authenticity, alliedship and agility”. The idea is to give partners a better sense of how to encourage people to bring their real selves to work, stand up for others if they are victimised and tackle tricky conversations with a more structured approach.

More than 90 per cent of the firm’s North American partners have had 3As training. Mr Meltzer says: “If we are going to achieve what we need to with talent, clients and melding cultures, I need to change the complexion of the firm. And the first critical step was getting people to accept there is a problem.”

The NYU Centre’s work with DLA Piper continues, exclusively for now, but the firm will eventually share its findings with the profession. The focus now is on how to tackle systemic problems that prevent wider inclusion, such as the gruelling round-the-clock nature of high-level commercial legal work.

Both Mr Immelt and Mr Meltzer feature in the Innovative Individuals section of the report. While the North American legal markets tend to lag behind those of the UK and much of Europe, these two seasoned law firm leaders show that change can happen relatively quickly when the commitment is driven from the top.

The FT report also shows how change in the North American profession can be led by other stakeholders, including the business and support professionals.

The “intrapreneurs” section profiles 10 people, not necessarily legally trained, who are undertaking different roles both in-house and in private practice to create the conditions for innovation. The achievements of both the in-house and private practice winners show how dynamic the legal industry can be with the addition of cognitive and professional diversity.

The pace at Hogan Lovells needed to pick up. If you are training for a marathon and you know the cut-off time is three-and-a-half hours, you need to run a mile in about eight minutes.

FT Innovative Lawyers North America 2019 is a rankings report and awards for lawyers based in North America. Shortlists for the awards comprise the top-scoring submissions in each ranking.

The FT and its research partner RSG Consulting have devised a unique methodology to rank lawyers on innovation. Law firms, in-house legal teams and other legal service organisations were invited to make submissions.

For this report, we received more than 350 submissions and nominations from 91 law firms and legal service providers and for 103 in-house legal teams.

Research was conducted by RSG researchers between August and November 2019.

We conducted interviews with more than 600 clients, senior lawyers, executives and experts to arrive at the final rankings.

Each entry is scored out of 10 points for originality, leadership and impact for a maximum score of 30. They are then benchmarked against each other to arrive at the final rankings

The rankings are an aggregate, respectively, of each law firm’s performance across the business of law and legal expertise categories in the report.

The total score for the most innovative firms in the business of law ranking is the sum of all ranked entries in the five specific categories of the report.

The total score for the most innovative law firms in the legal expertise ranking is the sum of all ranked in the five specific categories of the report.

The overall ranking for the most innovative firm is an aggregate of each law firm’s performance across all 12 categories in the report. 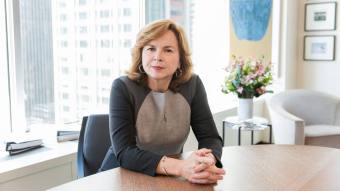