Vincent Boland in Hillsborough and Mure Dickie in Ingliston

Such is David Kerr’s horror of European rules and regulations that the 27-year-old County Down farmer is willing to put a big slice of his annual income at risk by voting to leave the EU next month.

“EU regulations are putting farmers out of business,” said Mr Kerr, citing the paperwork required before he can spread slurry or move his sheep and cattle on Northern Ireland’s Ards peninsula. “If we leave . . . things will be more down to earth.”

Yet across the North Channel in the Scottish Borders, livestock farmer Elizabeth Fletcher said the threat that leaving the EU would pose to farm subsidies paid under the Common Agricultural Policy means she will vote to stay.

“Our business certainly wouldn’t be viable without that support,” Ms Fletcher said.

Conflicting views of the impact of a Brexit on farmers’ finances and freedom of management have become a faultline in the potentially crucial rural vote ahead of the UK’s referendum on EU membership on June 23.

Farmers are considered among the most likely to turn out and few constituencies have more at stake, given the central role that the CAP plays in the agricultural economy.

Uncertainties about EU membership cast a shadow over Northern Ireland’s Balmoral agricultural show this month, where proud farmers showed off their finest bulls, ewes and poultry in the sunshine and discussed Brexit in stuffy tent pavilions.

At a spirited debate in Ingliston, home of Scotland’s Royal Highland Show, Owen Paterson, a Conservative former UK secretary of state for agriculture, denounced the EU’s “blundering incompetence” and “one-size fits all” policymaking.

Mr Paterson said the UK’s net contribution to the EU meant it would easily be able to match current farm funding if it left, while Westminster and UK devolved parliaments would gain much greater ability to tailor policies to local conditions.

“Don’t worry about the money, there will be more to play with,” Mr Paterson said.

View the FT’s comprehensive guide to the vote on whether Britain should stay in Europe, with all the latest news, analysis and commentary from both sides of the debate. See more

Remain campaigners insist that leaving the EU would be a leap in the dark.

At Ingliston, Phil Hogan, the Irish European agriculture commissioner, acknowledged the CAP was too complex, but said he was working to simplify it and that national governments already had great flexibility of implementation.

Leaving the union would remove the more than £3bn a year paid out under the CAP in the UK. “CAP, warts and all, is providing a stable safety net for farmers,” Mr Hogan said.

It is an argument that resonates with Kelvin Pate, a livestock farmer from south of Edinburgh. “Traditionally we’ve had a Westminster government that has not been pro-farming,” Mr Pate said. “Europe in general has more of a connection with agriculture than the UK has.” 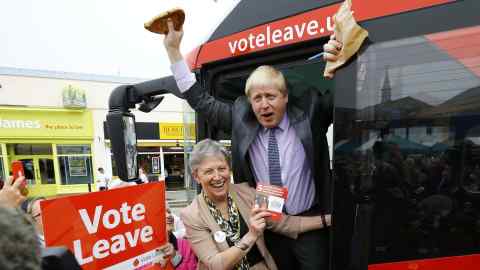 Eamon Fitzpatrick, a dairy farmer in County Down, is also sceptical that Northern Irish farmers would receive current levels of subsidy if the UK voted to leave.

“Half my income relies on the single farm payment, and I wouldn’t like to be relying on a Conservative government to make that up to me,” Mr Fitzpatrick says.

In a reflection of the divisions, NFU leaders across the UK have said their members’ interest will be best served by staying in the EU but have declined to take a leading role in the Remain campaign.

Many farmers are vocal in their desire for change. In Northern Ireland, the Democratic Unionist party is the only governing party in the UK to support Brexit and appears likely to carry with it its traditionally strong farming base.

Alison Muirhead, a Scottish grass-seed farmer, is eager to say goodbye to the EU because she considers it to be in thrall to big business. “Europe is a failed experiment,” she said.