Sign up to myFT Daily Digest to be the first to know about Supply chains news.

From chip shortages shuttering car plants for weeks to shipping delays and soaring costs, the pandemic has shone a spotlight on global supply chain deficiencies.

Not all supply chain problems will linger. Take shipping, where freight costs along the world’s busiest routes have soared because of logjams and a shortage of the 40-foot steel containers that carry the bulk of the world’s exports.

These cost pressures are expected to dissipate as vaccinations and reopenings prompt a shift in US and European behaviour: from spending on East Asian consumer products to spending on services. While container shipping prices are expected to remain higher than before the crisis, they are unlikely to stay at their current levels. It now costs about $4,000 for a container between East Asia and the US west coast, up from $1,500 at the start of 2020.

But other problems in the global supply chain need to be addressed. The shortage of computer chips, used in modern automobiles for anything from brakes to seats, is the latest example of the danger of relying on “just in time” production. Manufacturers were caught out in a similar fashion after the 2011 Japanese tsunami. There is a clear case for building up inventories in certain crucial components.

One reason why the chip shortage has been so severe for American automobile manufacturers is that US-Chinese tensions have led US companies to shift from suppliers in mainland China to Taiwan’s TSMC. That trend will not disappear following Donald Trump’s departure from the White House. Indeed, it may intensify, with new US president Joe Biden intent on building supply chains that rely less on China for chips and other strategically important products.

One response to both geopolitical risk and the vulnerabilities exposed by the pandemic has been to press for bringing production home, with lawmakers in both the US and in Germany raising the prospect of reshoring.

However, many economists believe moving chip manufacturing closer to home makes little sense. “Automakers need to have an alternative strategy, but the scale and sophistication you need to make the chips — which are not very high margin — is very high,” says Joanna Konings, senior economist at ING Bank. “Europe and the US are so far behind Asia at this point.”

To hedge supply chain risk, leading manufacturers are also sourcing from more suppliers. “Technology companies have been diversifying from China — often in favour of south-east Asian markets such as Vietnam and Indonesia,” says Ebru Pakcan, global head of trade business at Citi, a US bank.

“In some instances, where companies have maintained China-based suppliers, they are being used to service China itself, which is a huge market in its own right, with other locations servicing international markets,” she explains. Central and eastern Europe will benefit as European-headquartered companies look to produce closer to their customers, as will Mexico, for those companies based in the Americas, Pakcan adds.

Manufacturers will also have to carry out greater due diligence on their suppliers. As part of a more general push in financial and business arenas to consider environmental, social and governance (ESG) responsibilities, governments are more insistent that foreign suppliers meet acceptable standards.

Germany’s cabinet this month approved a law that requires German companies to protect human rights and environmental rules throughout their global supply chains.

The EU is intent on turning multinationals into labour rights enforcers, too. “We will be seeing more and more obligations over time,” says Anahita Thoms, partner at law firm Baker McKenzie. While this may create competitive disadvantages in the beginning, Thoms believes it will result in those companies that invest in sustainability becoming more resilient and securing the most ethical suppliers early on.

Nevertheless, meeting due diligence standards and diversifying supply chains will raise prices in the short term — as would reshoring to markets with higher labour and production costs if politicians’ words are met with actions.

A need to adjust to manage shocks such as pandemics and geopolitical pressures may mean global trade ceases to be the deflationary force that it has been in recent decades. Efficiency gains from technology and logistics, along with cheap (mostly Asian) labour, had helped keep a lid on the costs of consumer durables. But that is now changing.

“The industrial strategies of the US, China and the EU will make life harder for exporters,” says Konings. “It is a quicker-on-the trigger world that we are living in.” Before Covid, tensions had led to more tariffs, and during the pandemic subsidies to domestic industries have favoured domestic producers, she adds.

“We should expect to see lower levels of technological diffusion and productivity as the world closes in. Those dynamics are going to be inflationary.” 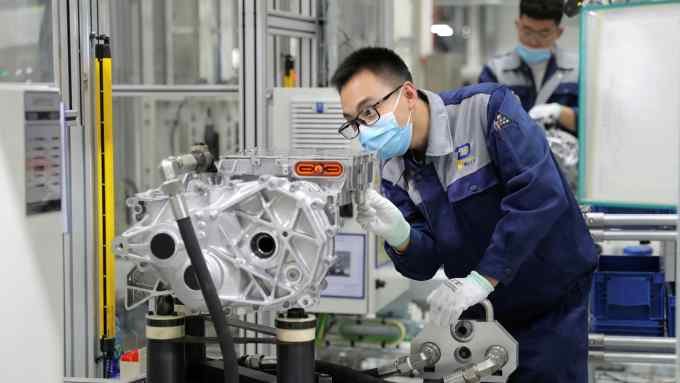