The Great Animal Orchestra — collecting the sounds of endangered lives

Over the course of his life, 80-year-old Bernie Krause has recorded some 15,000 animal species in their natural habitats

Bernie Krause, a man who became obsessed with sound at an early age, played a prominent role in one of the most distinguished moments in movie history. In the opening to Francis Ford Coppola’s 1979 masterpiece Apocalypse Now, a helicopter sweeps across the screen, the threatening noise of its rotor blades expertly simulated by Krause’s synthesised score. The jungle below suddenly erupts, silently, into flames. Music by The Doors wafts into the brutal scene. “This is the end,” intones Jim Morrison lifelessly. “Beautiful friend.”

Forty years later, Krause is still producing art that is preoccupied with the end. Or perhaps that should be The End. This time it is not the ill-judged bombing of south-east Asia that prompts his concern, but the death of the planet itself. While Krause was busy, back in the day, introducing the spacey ways of the synthesiser to the film and music worlds, he developed a parallel interest in recording animal sounds from nature. The hobby became a collection, and his meticulous curation of the collection became a moral calling.

Over the course of his life, 80-year-old Krause has archived the sounds of some 15,000 animal species in their natural habitats. The archive tells a depressing story: scrutiny of 5,000 hours of recordings reveals that many of them no longer exist. “It is more than half,” he tells me dispassionately in a telephone conversation from California. “Probably closer to two-thirds. They are gone.”

Excerpts from Krause’s recordings form the centrepiece of “The Great Animal Orchestra”, making its UK premiere in London on October 2. Described variously as a sound sculpture, or an eco-installation, the show puts together the animal sounds with their visual representations, in the form of colour-coded, abstract “spectrograms” as conceived by the British art collective United Visual Artists (UVA). Commissioned by the Cartier Foundation, the performances have already enraptured visitors in Paris, Seoul and Shanghai.

Krause urges his audiences to watch and listen, carefully. He says it is the voices of the wild which deliver “a far more substantial and immediate assessment of our current relationship to life on Earth than any other factor that comes to mind”. He cites the recording of an elephant herd, which he made in the Central African Republic. They were gathering to bathe, and they started vocalising in a way he had never heard before. “We know that herd has gone because it has been poached, and we will never hear those sounds again,” he says. “There are a lot of examples like that.”

The sounds of nature, he has discovered, are far from universally harmonious. There is dissonance in there, too. He writes that the calls he collected from a beaver in distress, as a result of human activity, were the “saddest sound” he had ever heard. “You can hear all the things that are going wrong. The narrative is clear, but it is a narrative we are just beginning to decipher. We don’t have the key yet, but we are working on it.”

Krause’s experiences in the world’s outbacks make for apprehensive reading. In one recording which features in “The Great Animal Orchestra”, an unidentified and persistent sound gets gradually louder. Krause says he finally worked out that it was a pack of wolves; and that there were actually two, discrete sounds. “It came from two different packs. One was behind me, one in front of me. They came to about 15-20 metres’ distance. We could see the colour of their eyes. They didn’t confront each other, or affect us at all.” His colleague asked him if he was OK. “I said, ‘I don’t know about you, but I’m in heaven!’”

I ask if he feels like a conductor, putting shape and coherence into the random sounds of his “orchestra”, but he dislikes the notion. “The natural soundscape happens all by itself, without our help. It is extraordinary and it is beautiful. We can’t improve on that. I am not a conductor; I am a visitor to the museum.”

Was it a long-held ambition to find a visual accompaniment to his soundscape? “We are a visual culture,” he replies. “Everything we know about the world is through what we see. But sound is at the other end of the scale. It is ephemeral. You can’t touch it, smell it, or see it. What we are trying to do is turn things on their heads.” The installation, he says, achieves that. “The soundscapes have become the narrative that people depend on to have things explained to them.”

UVA seemed a natural partner for the project. The company was formed in 2003, working originally with the Bristol band Massive Attack, who were looking for original visual accompaniments to their concerts. Since then, it has worked with other stellar pop acts such as U2 and Jay-Z, as well as leading choreographers.

Founder Matt Clark says: “What we are trying to do with the ‘Animal Orchestra’ is take complex ideas and narratives and distil them down to their very essence, in their most minimal form. And then to present them in a way that can be experienced with more than just one of the senses.”

The pieces show — through sound and vision — patterns being made over time by the fates of the various habitats. “It is as if the different species are giving each other space, just like an orchestra. Bernie’s recordings illustrate how the industrialised world is having a massive impact on the disappearance of species. But at the same time they touch on the very origins of art and music, how we got to start composing things. There must be this correlation between what our ancestors experienced, and how we started to compose music.”

I ask Krause if there is any part of him that feels optimistic about the future. “People always ask me that, and I say that it reminds me of something [author and politician] Clare Boothe Luce once said in a lecture, that the difference between an optimist and a pessimist is that the pessimist has more experience.

“I am hopeful. But not optimistic.”

‘The Great Animal Orchestra’ is part of ‘Other Spaces’ at The Store X, October 2-December 8, thevinylfactory.com

Explore the series
READ MORE
The art behind Cuban propaganda 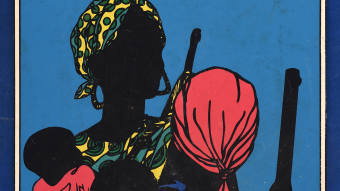