Brands are more self-reliant about the supply of raw material

Tequila’s main ingredient, the Blue Weber agave plant (or Agave tequilana, its scientific name), is a hardy desert succulent with spiky leaves like sharp blades that jut out in all directions. It favours high altitudes, requires little water and sounds resilient — a plant the tequila industry can rely on. Government and nature, however, are restricting supplies and compelling tequila producers to take action.

Since the 1970s, the Mexican government has applied denomination of origin rules to tequila, to restrict its ingredients and origins. Blue agave can be used to make tequila only if it is grown in one of 181 Mexican municipalities, most of which are in the state of Jalisco.

Meanwhile, the plants take at least five years to mature. In that time, if left unattended, the agave can succumb to pests like weevils, fungi and bacteria or to natural disasters like brush fires. Since the plants are propagated not with seeds but with shoots — hijuelos, “little children” — some scientists worry that the blue agave is becoming inbred, and thus more prone to illness.

Agave prices have climbed steadily from 3 pesos per kilo ($0.20) in early 2015 to 10 pesos ($0.53; the currency is now stronger) today, according to growers. This is thanks to global demand for tequila, especially in the US, home to 80 per cent of Mexico’s tequila exports. The Tequila Regulatory Council says Mexico is on track to export 190m litres of tequila this year, compared with 182m litres in 2015.

Therefore, to ensure supply, several large distillers have taken to planting their own agave. At least a third of the 340m agave plants in the region are owned by the tequila companies themselves, according to Luis Velasco, president of the National Tequila Industry Chamber. A decade ago, very little agave was produced by the distillers. “You need to have your own supply,” argues Mr Velasco, who runs Madrileña tequila, a brand launched by his grandfather in 1911. Madrileña began planting its own agave after the crisis of 2000, when a series of blights and a freak snowfall wiped out much of Mexico’s blue agave crop.

In a matter of 18 months, Mr Velasco recalls, the price of agave increased 24-fold, from 70 Mexican cents per kilo to 17 pesos (which was about $1.60 at the time). “It almost destroyed some companies, including ours,” he says. “They were harvesting anything they could to get that high price, even if it was too young or sick.” Today Madrileña grows 35 per cent of its own agave, and by 2018 it hopes that this will rise to 65 per cent.

Distillers complain that farmers tend to plant when agave prices are high and abandon the pursuit when prices are low. This leads to peaks and troughs for agave supply. For greater control, large brands such as Herradura have opted to farm agave.

“Over the past couple of years, we have generally been harvesting our own agave or using tequila in our storage tanks to meet our Herradura bottling demands,” says Gabriel Byrne, director of strategy and financial analytics for Herradura’s owner, Brown-Forman.

Tequila brand Jose Cuervo, whose brands account for a fifth of global tequila volume sales, according to drinks industry research firm IWSR, noted in September that it also supplies much of its own agave.

This trend irks small farmers like Francisco Javier Guzmán, president of the National Board of Blue Agave Growers. Large tequila companies producing their own agave is “high treason”, he says by phone from his 20-hectare property in Atotonilco, Jalisco. “We should all be able to share in the richness that is tequila.”

The 72-year-old has spent his life in the fields. Days start with milking and tending to his livestock, then he checks his crop of 50,000 agave plants. Mr Guzmán is among the small agave producers — larger-scale producers tend to have 350,000 or more plants. “Everything depends on the care — how much you dote on them,” he says.

The plants require some fertiliser now and then. But even in the wild, when left alone, he has seen agaves mature without nurturing in 14 years (this is considerably longer than those which have been nurtured). The plant’s biggest threat, in Mr Guzmán’s opinion, is the weeds that shrivel up in the dry season and easily catch fire.

Small-scale agave growers like Mr Guzmán are a rare breed. He has seen numbers of his kind thin out to 5,000 compared with 18,000 as recently as six years ago, he says.

He argues that farmers would be more motivated to plant agave if they had purchase contracts from distillers. Only a third of the agave grown by independent producers is under contract, he calculates. 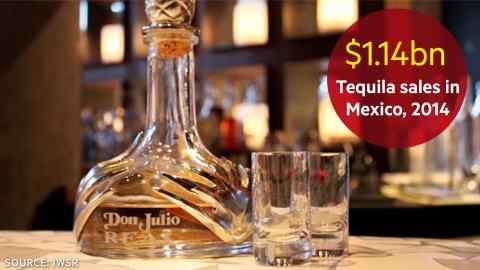 The rise in price over the past two years indicates agave supplies are getting tight. Part of this rise stems from a greater appreciation in export markets for tequila made entirely of blue agave. A spirit can sport the tequila label if it is 51 per cent agave and 49 per cent cane alcohol; a tequila made 100 per cent from agave, naturally, requires twice as many plants.

Exports of 100 per cent agave tequila rose 62 per cent between 2010 and 2015, to reach 77.9m litres, according to data from the Tequila Regulatory Council. Meanwhile, exports of standard tequila, with less agave, declined 3.8 per cent to 73.6m litres. Demand for blue agave is also on the rise for other uses, in particular agave syrup.

But high prices might actually ensure a healthier agave stock. Agave is most vulnerable when prices are low because there is little incentive to harvest the plants, says Joaquín Qui, a plant researcher with the Centre for Research and Applied Technology in Jalisco. If left to rot in the fields, infections and pests take over. “The biggest risk for agave is a lack of planning,” he says.

Agave prices would have to more than triple in US dollar terms to reach the desperate days of 2000. During that crisis, reports circulated of distillers sneaking in blue agave from other regions and of thieves cutting down agave plants in the dark of night.

The agave being harvested now is of good quality, which Mr Velasco says signals there is enough to go around. It is the small agave producers who could be the endangered species.

Agave nectar has been (controversially) marketed as a diabetic-friendly sweetener. It ranks low on the glycaemic index, which measures foods according to how much they lift blood sugar, as it is high in fructose, a natural simple sugar.

Research suggests that chains of fructose molecules known as fructans, which occur in agave and vegetables such as artichokes, may stall the advance of osteoporosis. Agave products are also sold as prebiotics, promising to stimulate growth of beneficial gut bacteria.

The tequila-making process generates thousands of tons of leftover pulp, which distillers often repurpose as fuel for boilers or compost for their agave plantations. But researchers have now found ways to convert this waste product into paper, timber, biofuels and even auto parts.

In July, the Ford Motor Company and Jose Cuervo, the tequila company, announced they were working together to develop a bioplastic that could be moulded into storage bins for vehicle interiors and potentially serve as wiring harnesses.

The project has a dual goal: to give leftover agave fibre, which is frequently discarded by distilleries, a second chance at usefulness; and to reduce the weight of cars and thus increase their fuel efficiency.