Wall St bank’s investment arm will manage assets of $1.2tn after purchase of US fund house

Laura Noonan in New York and Attracta Mooney in London

Morgan Stanley has agreed to pay $7bn in cash and shares to buy investment manager Eaton Vance in a deal that will create one of the world’s largest asset managers.

Morgan Stanley Investment Management will almost double in size to $1.2tn in assets with the purchase of Eaton Vance, one of America’s oldest fund houses. The move will leave it better positioned to compete against the growing might of passive fund houses BlackRock and Vanguard, as well as against the asset management arms of rival banks JPMorgan and Goldman Sachs.

“Eaton Vance is a perfect fit for Morgan Stanley,” said James Gorman, chairman and chief executive of the US bank.

“It provides quality, scale and the value-added fixed-income business, it enhances our client reach,” he said, adding that the deal would combine Eaton Vance’s distribution in the US with Morgan Stanley’s international distribution, providing “compelling long-term financial benefits”.

The acquisition marks an attempt by Morgan Stanley to establish a strong foothold in the lucrative asset management industry, where profit margins remain high despite stockpickers coming under intense fee pressure from the rapid growth of passive investing. Mr Gorman said two years ago that he wanted to double the investment division in size in the next five to seven years.

As well as adding $500bn of assets under management to MSIM, the deal will offer new products in fixed income and environmental, social and governance investing, adding firepower to a division that delivers under 10 per cent of the bank’s revenues in a typical year.

Mr Gorman on Thursday said that, for acquisitions, “this is absolutely it for a while” for Morgan Stanley. He defended the 38 per cent premium for the Eaton Vance deal as a “fair price for a great business”.

He said: “It looks like a high premium and a full price but the way you get deals done is you offer a fair price for a great business. You don’t get great businesses cheap.”

Mr Gorman said the limited overlap between the two firms would help the integration of the merger succeed. “Many asset managers are merging simply to get scale [ . . .] with that comes a lot of friction.”

Morgan Stanley’s purchase of Eaton Vance is the latest in a string of deals by midsized asset managers, aimed at helping them compete against the world’s biggest players. It follows the merger of Standard Life and Aberdeen in 2017, Invesco’s purchase of Oppenheimer last year, and Franklin Templeton’s takeover of Legg Mason this year, for $6.5bn including debt.

Last week, the hedge fund run by Nelson Peltz said it had bought stakes in asset managers Invesco and Janus Henderson, arguing the industry was ripe for further consolidation.

Dan Simkowitz, head of MSIM, said that deal had “nothing to do with” consolidation in the investment management industry and was driven by a desire to fill gaps within Morgan Stanley’s own business and buy an attractive asset before someone else did. 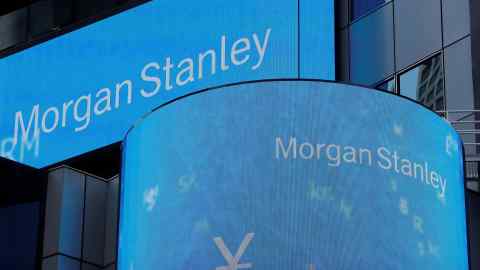 Eaton Vance shareholders will receive $28.25 in cash and $28.25 in Morgan Stanley shares, a total consideration of $56.50 versus Wednesday night’s closing price just below $41. They will also get a one-time cash dividend, from Eaton Vance’s own reserves, of $4.25 before closing.

Shares in Eaton Vance were up 47 per cent in Thursday trading.

Mr Gorman has spent more than a decade moving Morgan Stanley away from its heavy reliance on volatile investment bank revenues to one with more stable revenues driven by wealth and asset management.

He said: “A decade ago, our asset management and wealth management businesses had bright spots in them, but they weren’t big enough . . . where they could provide real stability to the rest of the organisation. This is exactly what we wanted to engineer.”

The US bank expects to be able to cut about 4 per cent from the combined expense base of Eaton Vance and MSIM, delivering annual savings of $150m. The bank said the deal would be neutral for earnings per share in the short term, and “marginally accretive thereafter”.

Morgan Stanley has enjoyed a recent run of record-breaking results, and was the only big Wall Street bank to post a rise in earnings in the second quarter.

Eaton Vance registered net outflows of $454m in the nine months ending July 31 (the first three quarters of its fiscal year ending October 31), compared with positive inflows of $14.1bn in the same period of the previous year.

Get alerts on Morgan Stanley when a new story is published