Foreign investors are flocking to South Korea’s red hot stock market, one of the world’s best-performing this year, as signs of a strong economic rebound from Covid-19 fuel demand.

The country’s benchmark Kospi Composite has gained about 90 per cent since the height of coronavirus-induced market turmoil in March. The rally has been boosted by strong investor appetite for shares in semiconductor companies, which could benefit from improvements in global capital expenditure next year.

Global funds have bought a net $5bn of South Korean shares since the start of November, with purchases of the country’s blue-chip shares hitting the fastest pace in four years.

Analysts are optimistic on the outlook for South Korea’s economy and markets next year. Investment bank JPMorgan Chase forecasts that the Kospi will rise by another 15 per cent in 2021, even as further waves of coronavirus infections threaten the country’s export-led economic recovery.

The OECD expects that South Korea’s economy will grow 2.8 per cent in 2021 — the best performance among its 37 members — following a 1.1 per cent contraction this year.

Technology companies including Samsung Electronics, SK Hynix and LG Electronics have benefited from strong demand for mobile devices, TVs and other home appliances as people spend more time at home during the pandemic.

The country’s exports jumped by more than a quarter in the first 10 days of December as shipments of semiconductors and mobile devices soared 52 per cent and 60 per cent respectively. Brokerage Nomura has predicted “another super cycle” in the memory chip market next year. 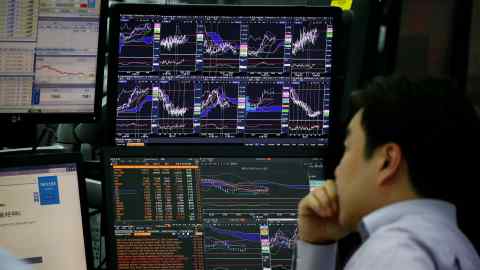 JPMorgan in a recent note forecast that South Korean companies would post on average a 56 per cent increase in their 2021 operating profits, which could help drive stock valuations higher.

Analysts also think the country’s economic recovery will broaden next year to include names outside of the tech sector, while improving corporate governance and shareholder return policies could also boost share valuations.

While an earnings recovery in South Korea could propel the Kospi to its best annual performance in more than a decade this year, with the index up 26 per cent in 2020, some analysts are concerned about valuations.

The index trades at almost 14 times its projected earnings for the next 12 months. While that is a significant discount to the forward PE of about 26 for Wall Street’s S&P 500, it marks a 10-year peak for the South Korean index.

Corporate earnings could also be affected by a rising won, which makes South Korean exports more expensive. The currency is up 6 per cent against the dollar this year, with some analysts predicting it will touch its 2008 high of Won1,000 per greenback.

“Valuations seem stretched but the rally going forward depends on corporate results,” said VIP’s Mr Choi. “The stronger won could work against exporters, potentially pulling down their earnings next year, while the economy could face a longer-term backlash from sharp debt increases of government and households.”