Start a 4-week trial
How To Spend It  House & Home

Ghosts and the Big House: rediscovering a lost world in Ireland

It was WB Yeats who made Lissadell famous. A Greek Revival-style limestone mansion built in the 1830s for Sir Robert Gore-Booth, it stands in a 400-acre estate overlooking the Atlantic Ocean about nine miles from Sligo on Ireland’s north-west coast. Yeats was first invited to stay in 1894, and while the exterior of the house was forbidding, he found the interior “exceedingly impressive”, especially “a great sitting room as high as a church”. The poet was captivated by two of the Gore-Booth sisters, Constance and Eva, who became good friends and inspired one of his most haunting poems, “In Memory of Eva Gore-Booth and Con Markievicz” (1933):

The light of evening, Lissadell,
Great windows open to the south,
Two girls in silk kimonos, both
Beautiful, one a gazelle.

Today, an estimated €10m has been spent renovating Lissadell, and the “great windows”, with their views across Sligo Bay, have been restored, though Constance’s initials, scratched on a windowpane, are still visible. There is a Yeats Gallery, opened in 2010 by Leonard Cohen, containing manuscripts and photos of the poet, as well as paintings by his brother, Jack. And the former estate manager’s house, situated on the seashore and backing on to the Alpine walled garden, has been turned into an exclusive private rental, brought to life with lovingly refurbished features including art-deco fireplaces and stained-glass windows. The property includes a 750sq ft master bedroom – but, instead of the old iron ranges that used to be a feature of the Big House, the kitchen is gleamingly modern.

Families such as the Gore-Booths were part of the Protestant Ascendancy, the landowning minority who had been the dominant class in Ireland since the 17th century. Most were Unionists opposed to Home Rule, and as the struggle for independence intensified, their houses were increasingly seen by Nationalists as oppressive symbols of Ireland’s colonial past. This faux charmed world of the Big Houses and their inhabitants fascinated novelists and poets, who depicted it as a blend of comedy, satire, drama and Chekhovian melancholy. William Trevor has explored the genre many times, notably in Fools of Fortune (1983). JG Farrell portrayed a once grand but crumbling Anglo-Irish hotel as a metaphor for the fate of the British Empire in his brilliant 1970 novel, Troubles. Elizabeth Bowen and Molly Keane, who both grew up in the early 20th century, channelled the experience of trying to hang on to “a jolly but doomed” way of life, as Keane put it, into their books. And only last year, the Booker Prize-winning author John Banville used a fictional Big House as the setting for his 1950s literary thriller Snow.

Some of the houses that inspired these stories are long gone, but, like Lissadell, those that survive – whether as private homes, hotels or both – are fascinating places to visit and explore. Coopershill, 13 miles south of Sligo, was built in 1774 for the Cooper-O’Hara family; their descendants still live on the 500-acre estate while running the house as a small but luxurious hotel. It’s reached by a mile-long avenue trailing through parkland with a deer herd grazing in the woods. The front door is said to be the tallest in Sligo, designed to suit its 18th-century owner Arthur Cooper, who liked to ride his horse into the hall at the end of a day’s hunting. Venison is often on the menu and most of the ingredients will have travelled no further than 200m from the estate farm or garden to the plate.

The atmosphere inside the house, complete with horses, dogs, log fires and the scent of hyacinth, is redolent of Bowen’s elegiac novel The Last September. Published in 1929, the story revolves around a fictional Big House modelled on the author’s family home, Bowen’s Court in County Cork, where not everything was as grand as it seemed. The elegant pink curtains in the drawing room, for example, were partly made from corset material supplied at a discount by the local draper. Set in 1920 and 1921, the novel is the story of the Anglo-Irish Naylor family as they host luncheons and tennis parties and try not to notice the threatening changes going on around them. Its climax sees the Big House burn down.

Molly Keane’s childhood home, Ballyrankin in County Wexford, which had a view over the River Slaney towards the Blackstairs Mountains, was also burned down by the IRA in July 1921. The teenage Keane was away, but she never forgot her mother describing the smoke tinged with the scent of clover from the hay fields. Keane’s world was as sociable as it was impecunious, and in her early 20s she began writing comic novels about her country and hunting set, published under the pseudonym MJ Farrell. But it wasn’t until years later that she wrote the series of razor-sharp novels about the self-deceptions and petty snobbery of Anglo-Irish life that cemented her reputation. Good Behaviour – published in 1981 and described in a review by Dirk Bogarde as “malice, smothered with charm” – was shortlisted for the Booker Prize. By then, Keane was a widow living in a pretty cottage overlooking the sea in the village of Ardmore, County Waterford. The cottage may have seemed a step down from the world of the Big House – although Keane entertained there as vivaciously as anywhere – but it was at Ardmore that she picked up her pen again after a 20‑year hiatus. Keane died in 1996, and her seaside home now transforms into a writers’ retreat each August, hosts various literary events, and is available to let.

How To Spend It
Escape Special: Connemara’s captivating wilds 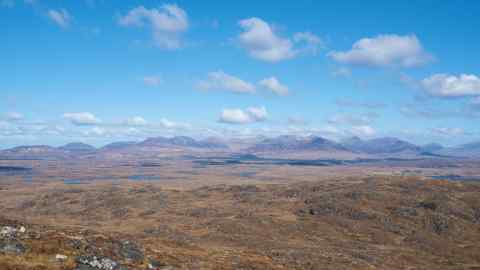 But to get the full experience, a number of houses in the Blackwater Valley – where Keane used to socialise – combine a historic past with a modern and luxurious present. Dromana, part of a 600-acre estate near Cappoquin, not far from where Keane spent her married life, sits on a rocky outcrop overlooking the river and has been in the ownership of the same family for 805 years. Fortwilliam House, on the southern bank, is about two miles upstream from Lismore Castle. Both are available to let – at Dromana there is the choice of the East Wing, rich in old-world charm, which sleeps eight, or the cosy River cottage; while Fortwilliam has seven double bedrooms (as well as another wing, accommodating 24 in total) – and from either house, guests have the opportunity to fish the finest salmon beats in Ireland. Further west into County Cork, novelist Edith Somerville’s Georgian-style family home, Drishane, is set in 18 acres of gardens and woods in picturesque Castletownshend, overlooking Castlehaven Bay. The Big House welcomes guests with a dramatic sweeping staircase beneath a high arched window, and there are also cottages to let in the grounds.

These grand properties survived intact, but other Anglo-Irish houses were less fortunate. At least 76 Big Houses are estimated to have been burnt down by the IRA during the Irish War of Independence (1919-1921) and 199 more during the bitter Civil War that followed. One such house, Moore Hall in County Mayo, which belonged to the family of Anglo-Irish author George Moore, was torched by anti-treaty forces in 1923. The ruin remains in much the same condition as when the insurgents left it. The estate is now a forestry park and you can follow an eerie path into the woods and see the house and the old walled garden that was next to it.

When WB Yeats looked back on the lives of the Gore‑Booth sisters, he regretted the political choices they made. Eva – the gazelle – grew up to become a prominent suffragette and social campaigner, while Constance, who married the Polish count Casimir Markievicz, went on to fight in the Easter Rising in Dublin in 1916. She was condemned to death, but was then reprieved by a British military tribunal and became the first woman MP to be elected to the House of Commons – though along with other members of Sinn Féin she never took her seat. She died in 1927, one year after her sister Eva, and it was six years later that Yeats published his tribute. More than 80 years after the poet’s own death, the best qualities of “the Great Gazebo” – as he described Anglo-Irish life in that same poem – endure in houses such as Lissadell, Coopershill and Drishane. To visit is a small step back into a lost world evoked in the books and poetry so enjoyed by successive generations.