In Milan, fashion embraces the ‘simple things’ — like watering cans and gardening

Fendi staged its Spring/Summer 2020 show in the midst of summer 2019 — in the sprawling gardens of the Villa Belgiojoso Bonaparte. It wasn’t incidental: backstage, Silvia Venturini Fendi was near-espousing Rousseau when declaring that her collection was about simplicity and holistic harmony. “It’s about reconnecting with simple things,” she said. “Men outdoors, a return to nature.” Speaking of Rousseau, there was something a touch Marie Antoinette to the parade, of the queen cavorting through her hameau dressed as a humble country girl and milking cows specially cleaned and perfumed for the august occasion.

Fendi’s perfumed cow was a watering-can, bound in leather, toted by a model in a silk-organza sun-hat (the fabrics were au natural: silk, cotton, wool, cashmere). The theme, as the watering-can attests, was gardening, not just rambling around woods in silken finery. It made me think of Mona von Bismarck, the mid-century American socialite who had her gardening clothes handmade by the couture ateliers of Balenciaga. Times when such indulgences seemed eccentric rather than indecent have passed, and men won’t garden in these clothes, but the conceit was nice, leading to knit and leather chopped-up like trellis, the practical details of big pockets and tool-belt-ish bags, and a fusty, musty marsh-wiggle palette of boggy green and peat-brown.

Fendi began collaborating with artists a few seasons ago, to commercial success. The last was the late fashion designer Karl Lagerfeld, who worked on the January Fendi men’s collection for the first time. The new one is the Italian film director Luca Guadagnino, who Silvia Venturini Fendi invited to work with her backstage at that January show. Fendi (the woman, not the brand) has long-supported Guadagnino — she was respectively associate producer and producer of his 2009 film Io Sono L’Amore and 2018’s ‪Suspiria‬. It was on the set of the latter that Guadagnino doodled some designs that became the collection’s key print, while the bucolic rural setting recalled his Oscar-winner Call Me By Your Name. There were also short-shorts in the collection, that would give the infamously brief numbers sported in that production by Armie Hammer a run for their money (although, unlike that film, no testicles were exposed in the making of this fashion show).

Yet, despite the interruptions and interpretations of guest artists, Fendi has carved a niche for itself in the men’s market, and has also become a highlight of Milan menswear week. part of that, granted, is through paucity of shows — heavy-hitter Gucci has shown men’s combined with womenswear for a number of years, and the absence of Prada this season was felt. Still, Fendi’s menswear feels distinct, special, and trend-setting rather than scrambling after what others are doing. And this al fresco show was fun, light-hearted, quite sweet.

Dolce & Gabbana also showed outdoors, for their Sartoria line, presented in the courtyard of their Metropol headquarters, a former cinema, to a cluster of a few hundred fans. It was less picturesque than a garden, but threw the focus firmly onto the clothes, as models filed down flights of stairs — very many models, dressed in very many variations of evening suits and billowing, wide-cut, robe-like jackets. The latter were sometimes criss-crossed with frogging, the former brocaded to within an inch of their lives — like Napoleon’s dressing gown, over Liberace’s pyjamas, with Louis Quatorze beribboned slippers on their feet. It was also freed entirely from the niggles of impropriety or appropriation that marred their mainline collection (which showed at the weekend). If Dolce & Gabbana were appropriating anything, it was their own past: you couldn’t call these clothes by any name other than Dolce & Gabbana. There is still retail mileage there, especially for private clients willing to spend a lot of money to look anything other than cheap. One in the audience wore a crown. Modest, these looks — and the men who wear them — are not.

Shows are all well — especially when they’re outside, and it’s sunny — but sometimes seeing pieces on a rail does them the world of benefit. Salvatore Ferragamo staged its first stand-alone menswear show in two years in Florence this week, on unexpected models including 63 year old graphic design legend Peter Saville and Michael Berger-Sandhofer, the European chairman of Sotheby’s. They looked good — and that casting trick caught plenty of attention. Admittedly, more was paid to the actor Hero Fiennes-Tiffin, nephew of Ralph Fiennes — although Saville has a cult following too.

In the showroom, the pieces were quiet, discreet, interesting enough to keep you interested, but nothing to write home about — in a good way. Wool jackets had flanges across the shoulders and revers faced in membrane-thin leather; knits were crunchy, colours popped. It looked — it was — luxurious, in a sort of Hermès mould. Everyone is vying to be the ‘Hermès of insert-whatever-locale-they-occupy’, not so much because of turnover or profits but for the cachet and near-constant demand for product. Hermès is envied. And Ferragamo seems to have a genuine chance at becoming their Italian counterpart, with a storied Florentine history, craft expertise, and heritage.

The brand has floundered a little over the past few years, thrashing around for new directions, which are now coming together under creative director Paul Andrew, formerly a shoe specialist who has shown himself adept and in-tune with what Ferragamo should and could mean, alongside CEO Micaela Le Divelec Lemmi, appointed last July. Ferragamo revenues are up 4.3% for the first quarter of 2019, to €317m, beating analysts estimates of €315m, some indication that the house’s recent shift in direction is paying off, albeit again quietly. 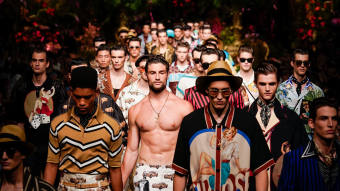