A lifetime in treatment: one haemophiliac’s story

Since the 1950s, a series of breakthroughs have changed the lives of those suffering from the blood disorder

A few months after he was born in 1952, Keith’s family doctor shrewdly suspected that the bruises on his legs could be a sign of haemophilia. The diagnosis was confirmed soon afterwards at Great Ormond Street Hospital in London, but the prognosis was bleak.

“They told my mother that she should not expect me to live past 10 or 15 years old,” recalls Keith (who did not want to use his second name).

As in most patients with medical conditions that prevent blood clotting normally, Keith’s symptoms rarely took the form of external bleeding. Instead, they usually came from internal bleeding into his joints. “Once or twice I would bleed and bleed and they had to use compression and seal the skin,” he recalls. “But mostly I remember as a child my knees would swell up to the size of footballs. I was in so much pain that I would hallucinate.”

In the 1950s, haemophilia — a genetically-inherited condition that predominantly affects men — was one of the best known rare diseases. It was a “royal disease”, associated with European aristocrats who were descendants of Queen Victoria. But it was only after the 1950s, thanks to a series of medical advancements, that haemophiliacs could enjoy relatively normally lives.

Disease control and prevention
Hurler and Morquio syndromes: growing up with a condition that kills 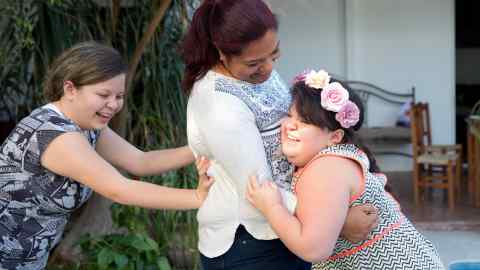 Keith was lucky. He has lived through several revolutions in treatment that have enabled him to pursue outdoor sports and to work as a television engineer and in the fire service. Now in his sixties, he is about to participate in a new clinical trial for another potentially radical breakthrough.

Until the 1960s, treatment normally came in the form of regular blood transfusions that took place in hospital.

“Often the patient did not show up until the situation was very bad,” says Michael Makris, professor of haemostasis and thrombosis at the University of Sheffield medical school. “By the time you were a teenager, you would have had severe arthritis in most joints.”

Then, new techniques were introduced to more efficiently collect the clotting “factors” or proteins in blood that help it coagulate, significantly easing the transfusions, which could now be conducted at home. Yet just as things were improving, many haemophiliacs were hit by a new setback: poorly screened blood products, often imported from the US, which were infected with HIV or Hepatitis C.

“I became involved in care in the 1980s and it was a very grim situation,” says Prof Makris. “Everyone was having major problems.”

Being part of a gene therapy trial is a no-brainer. It is something I never thought I would see

Health systems, including those in France and the UK, were affected — and subsequently criticised for being slow to improve screening and treat blood once the risks were known. Compensation and support since have also been slow.

Stigma remains significant. Ryan White, an American teenager, was one of those who contracted HIV through a contaminated transfusion. He fought against prejudice and to be readmitted into his school before dying in 1990.

“Many today are still unwilling to identify themselves in their families and communities,” says Liz Carroll, chief executive of the Haemophilia Society, the UK patient organisation.

In some countries in Africa and Asia, women carrying the mutation that causes the condition are still seen as unmarriageable, she adds.

But progress did continue. In the 1990s, the advent of laboratory-made “recombinant” clotting factors further reduced the risks. Prof Makris says that a centralised tender process in the UK has made them more affordable than transfusions. “The whole process has changed,” he says. “We now treat prophylactically to prevent bleeding, like you give insulin to those with diabetes.” He says that a network of specialist doctors and a comprehensive registry of patients has helped ensure widespread trials and co-ordination of treatment.

Yet operating with limited resources has sparked some intriguing discoveries. Studies in India have shown that even modest amounts of clotting factor can provide significant benefits.

Research into better treatments continues, including products for those resistant to clotting factors. There arre promising signs from the gene therapy trials now under way at companies including uniQure and Spark, which could reduce or eliminate the need for ongoing treatment.

Keith has no hesitation about participating in one of these trials. “I have taken part in a lot of developments,” he says. “Being part of a gene therapy trial is a no-brainer. It’s another major advance, something I never thought I would see. I’m looking forward to it.”