Telecoms companies are pinning their hopes on Apple and its new iPhone 12 to kickstart the long-promised shift to 5G, after slow adoption of the new networks among consumers over the past 18 months.

Apple gave 5G top billing in Tuesday’s iPhone 12 launch, marking a stronger push for networking technology by the Silicon Valley company than in any previous transition in mobile infrastructure.

“It is a tipping point for 5G,” said Marc Allera, chief executive of BT Consumer.

The “fifth generation” of cellular wireless was launched to great fanfare last year, initially in the US and South Korea, with operators in markets including the UK and Germany quickly following suit.

Carriers claim that 5G can offer download speeds up to 20 times faster than existing 4G networks, though coverage remains limited for now.

However, the new network has generated more interest from the corporate and industrial market than among consumers. Analysts at research firms Canalys and IDC estimate that just 13 per cent of smartphones shipped globally in the first half of 2020 were 5G-capable.

Even though Samsung and LG launched their first 5G handsets in mid-2019, operators say that none has yet offered the allure of a new iPhone. While the iPhone 12’s features may not offer anything radically different from previous devices, they believe Apple’s marketing power and loyal customers will make a stronger case for 5G.

“The iPhone is more important than any device, even though we have great devices already from Samsung and others,” said Johan Wibergh, chief technology officer of Vodafone, which has launched 5G in seven European markets.

Mr Allera, whose EE brand launched 5G networks in the UK 18 months ago, argued that Apple had a strong record in promoting growth in technology categories, including touchscreen phones, smartwatches and the app market, despite other companies already offering those services. “They will blow it up,” he said.

Waiting for the ‘killer app’

According to GSMA, the mobile trade body, operators are expected to spend 80 per cent of their mobile capital expenditure, or nearly $890bn, on 5G networks in the next five years, driving 1.8bn 5G connections by 2025.

However, telecoms executives admit that — even with the launch of Apple’s 5G-enabled iPhone — there is as yet no “killer app” that will immediately transform the way consumers use their smartphones. 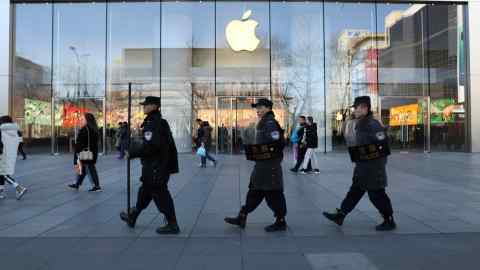 The launch of global 5G networks has coincided with increased pressure from US authorities on governments around the world to ban Huawei, the world’s largest telecoms equipment supplier, from them. That has stalled progress in some markets, including the UK, as telecoms companies have had to reverse their plans and react to new laws about high-risk vendors.

Meanwhile, the huge amount of capital needed for 5G, and a collapse in the share prices of some of the largest players in the industry, has put pressure on telecoms companies to justify the outlay.

In Europe, just under 2m 5G devices were sold in July, according to Jan Stryjak of Counterpoint Research. That is a higher portion of total smartphone sales than earlier in the year but, at just 11 per cent, sales are “still a long way from what is expected from a technology that has now been around for more than a year in many markets”, he said.

The pandemic has kept consumers at home more this year, where they can use their own WiFi networks, and away from city-centre areas that often have the best 5G coverage.

But Mr Stryjak said the biggest reason for slow 5G device sales was a “dearth” of good devices.

Operators now expect the iPhone 12 launch to drive a rapid adoption in 5G at a faster rate than in previous generations. “It is clearly a trigger for bigger upgrades,” said Mr Wibergh.

They are also offering consumers generous incentives to trade up. In the US, AT&T is offering hundreds of dollars’ worth of subsidies in one of the largest such promotions of recent years.

Apple has not always leaned so heavily on the iPhone’s marketing of the networking technology that underpins its products.

When it introduced the first iPhone in 2007, it did not even support 3G — five years after Nokia had unveiled its first device to use what was then the fastest network available.

This week, Apple’s presentation pointed to mobile gaming as one key use case for 5G, introducing a new iPhone version of the popular multiplayer game League of Legends. But arguments over the App Store’s commercial terms have prevented new games streaming services such as Microsoft’s xCloud, Google’s Stadia and Facebook Gaming from launching on the iPhone so far, potentially limiting the new device’s appeal among gamers.

Another selling point touted by Apple was the iPhone 12 Pro’s ability to shoot, edit, watch and share high-quality video footage using the new Dolby Vision HDR format. However, it chose to illustrate this feature with footage of professional filmmakers shooting wild horses in a desert environment — far from the densely populated urban areas where operators are deploying their first 5G networks today.

Indeed some analysts questioned whether Apple lived up to operators’ expectations in convincing consumers of the real benefits of 5G.

“New and better cameras are great, but the real 5G cycle is at least a year or two away,” said Craig Moffett, senior analyst at MoffettNathanson.

“The iPhone won’t change the world immediately,” said Mr Wibergh. But he argued that the benefits of the introduction of 5G will be apparent over a longer period. “We tend [in telecoms] to overpromise in the short-term and underestimate the long-term impact,” he said.

Apple will now be looking to app developers to produce the novel experiences, such as augmented-reality games, that can take full advantage of 5G.

“Apple will do more for 5G than 5G will do for the new iPhones,” said Thomas Husson of Forrester Research.