Edinburgh to Trinidad, Trinidad to Montreal, Toronto to London – uprooting from place to place has been the primary inspiration behind Peter Doig’s dreamy, near-mythical landscape and figurative paintings. His new exhibition at London’s Courtauld Gallery is powered by this same rhythm of movement, this time from Trinidad back to London where Doig studied in the ’80s and returned in 2021. The show features paintings started in the Caribbean and finished in London – together with new London work. As elsewhere in his paintings, here he pinpoints moments of strangeness or tension to create scenes that probe the space between imagination and memory. One Trinidad-based painting shows two musicians playing their guitars by the shores of a lake, while behind them a horse rider appears to be clutching a knife; another shows a skier poised at the top of a mountain slope. Of the latter, curator Barnaby Wright observes, “with its harlequin skier about to set off into the landscape, it is full of mystery, excitement and possibility”.

Peter Doig is at The Courtauld from 10 February to 29 May, sponsored by Morgan Stanley and supported by Kenneth C Griffin and the Huo Family Foundation

“After the moon landing in 1969 I was staring at the sky all the time,” recalls artist Anthony Daley. “I remember thinking: the sky is made of colour, and the world is made of colour. At that moment, I think, I invented painting for myself.” This fascination with the “beauty of colour” has continued to animate the Jamaican-born abstract expressionist throughout his 40-year career, and it defines his new commission from Dulwich Picture Gallery, for which he was asked to respond to Rubens’ luminescent c1630s painting Venus, Mars and Cupid.

Daley has produced a body of 20 radiant, smudge-textured paintings – on show across both the public art gallery and at Cork Street’s Flowers Gallery. Like his childhood skygazing, Daley wanted to use the experience to bask in the pleasure of colour and light. “That’s my challenge,” he says: to take paint “and raise it to something that’s sublime”.

Anthony Daley’s works are on show at Flowers Gallery, W1, from 11 January to 4 February, and at Dulwich Picture Gallery until 2 April

In 1971, fresh out of film school, the American photographer and writer Bob Colacello became the editor of Andy Warhol’s Interview magazine. During his ensuing 12-year editorship and close friendship with Warhol, he carried a compact Minox camera – the kind reportedly used by Cold War spies – using it to capture the high-octane parade of parties, events and escapades (and morning-after hotel breakfasts). These photographs are now going on show at Thaddaeus Ropac’s Paris gallery in an exhibition titled It Just Happened, Photographs 1976-1982, alongside corresponding letters, magazine cut-outs and memorabilia.

The black and white photographs capture the unbridled hedonism and playfulness of the 1970s jet-set crowd: one photograph shows Mick and Bianca Jagger’s young daughter Jade clambering out of the sunroof of a car at Montauk airport; socialites Carmen d’Alessio and Odile Rubirosa are captured at New York club Xenon, spreading their arms like wings while beaming at the camera; while actor Sterling St Jacques and model Pat Cleveland, dressed in bunny ears, dance on the mezzanine at Halston’s New York home in 1976. “It just happened that at the parties we were constantly going to in New York, Los Angeles, Paris and London,” Colacello says, “lesser-known people kept blocking my view of better-known people, but I took the picture anyway, because I realised parties were like that, producing a layered look that I came to see as my style.”

Bob Colacello: It Just Happened, Photographs 1976-1982, curated by Elena Foster and the Ivorypress team, is at Thaddaeus Ropac, Paris Marais, from 21 January until 4 March. A corresponding book is published by Ivorypress

Growing up, Julia Chiang’s parents didn’t throw things away. “An old chair leg would become a new railing. A hand-painted wood carving would show up as a holder for some new kitchen gadget,” recalls the Brooklyn-based artist. This idea of transformation “seemed to always be coming.” In Salt on Our Skin, a new solo exhibition in New York, Chiang continues her long-standing exploration of physical change and growth. In the new body of paintings, cell-like blobs of colour bump up against each other; geometric patterns spread across canvases; textures and colours nestle next to one another, as if separated by membranes. Chiang was interested, she writes, in “clay and paint as bodily forms and fluids, all the bits, the spills, the overflowing and the confined”.

Julia Chiang: Salt on Our Skin is at Nicola Vassell Gallery, 138 10th Avenue, New York, from January 12 until February 25 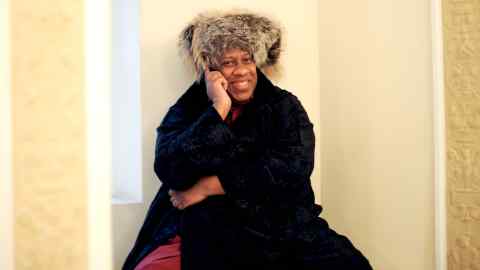