“I thought I was going to die by now,” said Virgil Abloh, after his strong Off-White show in Paris for SS19. It was 27 hours before his debut collection as men’s creative director at Louis Vuitton. The day before he had shot his Off-White women’s resort look-look. On Friday he was opening a collaborative exhibition with artist Takashi Murakami at Gagosian gallery in the city. A quiet week, then.

Abloh stepped up to the challenge. On the catwalk were jeans, T-shirts. A white hoodie had the Off-White logo and the word “teenager” in speech marks, a typographical signature of the brand. T-shirts came with images of Bart Simpson. A model came out in a red jean jacket as a nod to James Dean in Rebel Without A Cause.

It’s the kind of piece that has made Off-White such a massive commercial success. But some of his previous shows have felt Abloh trying to prove himself as a designer too keenly. Now he’s got one of the industry’s biggest jobs, Off-White can relax.

“It’s distinctly the teenager, the youth. It’s free,” Abloh said of Off-White. He could now concentrate on designing for “the kid in the line at Supreme” — that legion of consumers who queue for hours outside stores for new product — “and not use Off-White for the dual task of showing what I could do.”

Abloh said inspiration came from New York graffiti artist Dondi White. He was famous for graffiti-ing on subway trains in the 1970s, and eventually his work was considered as art. As a teenager, Abloh learned from White by tracing over pictures of his graffiti, and here there was graffiti on T-shirts as well as a coat.

Then there was Bart. One T-shirt had Bart Simpson saying: “chill, man”. Another: “I’m Bart Simpson, who the hell are you?” Nowadays teenagers don’t have to grow up. “You can tell from all my friends here,” said Abloh, pointing to the swarm of well-wishers around him, “they’re most likely to have on jeans, a T-shirt. That’s the code.”

At Acne Studios, there were further signs of menswear’s move to hot colour with a show full of neons. Here though was an experiment in colours that are usually used on nylons to highlight their artificiality. What happens when acid colours are used on linens and wools? An acid yellow linen suit gave the answer: it took on a strange glow, like it was under UV light.

Valentino had found in its archives some excellent prints. Many played with the brand logo, hand-drawn and placed on zigzag lines, graded in scale or turned upside down. They played on tracksuits, cagoules, denim jackets: the stuff that sells.

Earlier in the day I met with the brand’s creative director Pierpaolo Piccioli, who defined the collection in terms of the hip-hop legend and new era trap artists he had invited to see it. On the front row were Nas, who just released an album produced by Kanye West, A$AP Ferg, Syd and Keith Ape. “I wanted to relate to this generation,” said Piccioli. “If you do fashion and you don’t relate to life, you can do beautiful things but dead beautiful things.”

What does Piccioli listen to himself? He first mentioned David Bowie, but then he said, “I have three children. They listen to trap music. I have to face it,” he said. “To understand your children you have to understand what they like. I reset my brain everyday. Also, for the brand to not turn into a beautiful dead brand means you have to reset your values, always in a new way.” 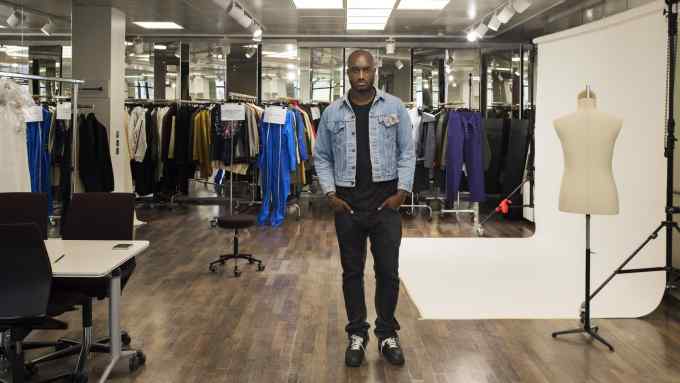