No pane, no gain: properties with the most spectacular windows

New technologies have radically reinvented our perspective on property. We look at the best in glass

They are an essential feature of every home, yet for the most part windows are things we look through, not at. Architectural ingenuity, however, is changing this perspective. “Windows have always been a statement of wealth,” says Jonathan Hopper, CEO of buying agents Garrington. “I think that what has changed is that the manufacturing process has come of age to the point that it has opened up a whole new world to architects and designers.”

The contemporary house by architects Foster Lomas at Sartfell Restorative Rural Retreat on the Isle of Man was shortlisted for RIBA’s House of the Year in 2019. The new-build is distinguished by dry stone walls that blend into the rugged backdrop, but the showpiece is a ribbon window that snakes around the upper floor, capturing views of the surrounding mountains. By incorporating this horizontal cut of glass (given the name “ribbon” by Le Corbusier in the 1920s) across the south façade, the architects created a house reminiscent of a bird hide – albeit a spacious 3,229sq ft nest that cost £1m to build. “The ribbon allows you to sit and follow the path of birds flying up the valley,” says Foster Lomas co-director William Foster. “We prefer to frame certain views like a painter, so that every window tells a different story.”

Windows, in Britain at least, were once carefully rationed. From 1696 to 1851, owners of houses with more than 10 windows were taxed and, as a result, only the wealthy could consider the extra frivolity of framing a beautiful vista. They were also hampered by technology – period glass was far more fragile than today’s toughened versions that can be cut and bent into shape, are highly insulated and are treated to repel UV rays. According to Trevor Kearney, a director of Savills’s country department who advises high-net-worth buyers on house purchases of £5m-plus, most are keen to embrace the more adventurous designs made possible by these advances. “Everyone wants light, bright spaces,” he says. “Ten or 15 years ago the trend was for periphery bifold doors, but architecture changes much like fashion. Now I am seeing internal glass doors – such as glass ‘links’ between an old and a new part of a house – and instead of bifolds leading out to the garden I have noted houses with huge solid sheets of glass that sink down into the ground, James Bond-style.”

Readily available curved glass is also spurring innovation among architects. In the woodland north-east of Utrecht in the Netherlands, Slangen Hulsker Architecten took inspiration from Frank Lloyd Wright’s Fallingwater house to create a pared-back villa that allows nature, rather than the architecture, to stand out. A series of glass pavilions are arranged on different levels helping to site the property within the hilly terrain, and the plentiful use of glass – gently curved at key vantage points – lends transparency to the building while providing a view of nature from every space within. The house is now on sale with Christie’s International Real Estate at €18m.

At Heathfield House – a behemoth of a modern mansion in London’s Highgate, which reportedly cost £32m to build – the grand spiral staircase is exposed to the outside world by full-height curved glass panels that mirror its sinuous shape, while at the top of the house a crescent-shaped, glass-framed building houses an office space in the clouds. The 10-bedroom, 18,293sq ft mansion is on sale with UK Sotheby’s International Realty for £40m.

the architect had a poem sandblasted onto the glass

Heathfield’s elevated position means it is not overlooked by its neighbours but, in many cases, the audacious use of glass must also meet the need for privacy. At Eglon House in Primrose Hill, where the rear façade of the property is almost entirely glass, the solution was simple: a mid-section of patterned glass block lenses allowing light in while shielding the interior from prying eyes. It is a striking modernist design inspired by Pierre Chareau’s iconic Maison de Verre (house of glass) in Paris, which takes on an ethereal glow when lit up at night. The film director Tim Burton has rented Eglon for the past two years but its owner has now decided to part with the 13,100sq ft live-work space, which is on sale through Aston Chase and The Modern House for £20m.

On the other side of the world in Redfern, Sydney, architect Emma Rees-Raaijmakers’s contemporary response to the need for shielding in a three-storey extension to an Edwardian house was to clad it in bronze panels that segue into perforated screens over the glass sliding doors (these fold back when the owners feel like facing the world). “The façade was envisaged to provide an intriguing sculptural element to the street, yet not be disruptive or purely decorative,” she explains. “Above all, it needed to serve a practical purpose, providing flexibility and privacy while filtering light within.”

A more novel approach to screening can be seen in New Zealand at the seven-bedroomed Ponatahi House in rural Wairarapa. Architect Stuart Gardyne, of the practice Architecture+, clad the house in glass to take advantage of its breathtaking aspect. He then commissioned Jenny Bornholdt, a former New Zealand poet laureate, to write a poem, which he had sandblasted onto the glass. The 8,353sq ft residence was built for British émigrés (who had toyed with branding their home with U2 lyrics before settling on the wise words of Bornholdt), and is on sale with Savills at NZ$10.5m (about £5.5m). Should the poem not be to the new owner’s taste, it can be sandblasted off.

But windows can also be used creatively inside the home. A good example is the former South Kensington artists’ studio transformed into a three-bedroom mews house by Emma Pocock of the studio Turner Pocock. Her team created walls of Crittall-style windows to divide the spaces that frame the stairwell – flooding light down from the ground floor to a new basement level. Huge windows also puncture walls at strategic points, ensuring light flows throughout the house. “The notion of open-plan has got a bit old, certainly for anyone who has kids,” she says. “This is a good half-way solution.”

On a more modest scale, Fabio Galeazzo of Galeazzo Design used a circular window as a focal point in a $50,000 conversion of a 1950s house in the city of São Paulo, Brazil – a playful and compact 646sq ft weekend getaway that he calls the urban hut. To counterbalance the building’s boxy shape, Galeazzo introduced vibrant colour and curves within, while his supersized porthole has a built-in bookcase looking out to the garden, ensuring it becomes part of the decor. “The bookcase rotates so that the books can reach the owners’ hands more easily,” Galeazzo explains.

Sheets of glass sink into the ground, James Bond-style

Contemporary design increasingly blurs the boundaries between inside and outside, allowing owners to immerse themselves in their surroundings. As one might expect, some of the most successful residential projects are located in areas of outstanding beauty – including Italy’s Lake Como, where a seven-bedroom glass-fronted house offering uninterrupted views of the lake is on sale with Sotheby’s International Realty for €5.3m. The Israeli arm of the estate agent is also offering an eight-bedroom villa for sale at ILS28m (about £6.1m) much further afield in Herzliya, an affluent seaside resort just north of Tel Aviv, promising an aspect of shimmering shores framed by huge panels of sea-green glass – a colour-blocked design that also keeps the 6,996sq ft interior cool. Elsewhere, more radical reinventions of windows are helping to create some of the world’s most interesting homes. In Mexico, the architect Tatiana Bilbao used mirrored glass to create a holiday home in the forests of Monterrey that reflects its surroundings, merging almost seamlessly within it. Inside, the feeling is of living among the trees but, as no one can see in, there is also a pervading sense of privacy and isolation.

House & Home
How coronavirus has shaped the home of tomorrow 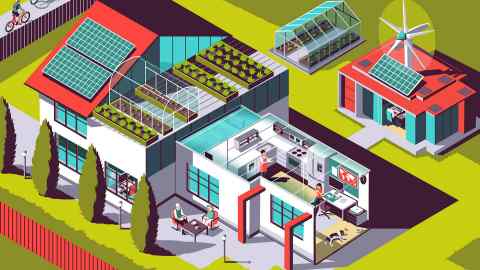 Bilbao’s house shows how glass can be used to create quiet architecture that melds with the landscape. In the city, radical design can also help overcome everyday concerns. In Fitzroy North, a suburb of Melbourne in Australia, a very ordinary Edwardian house has a contemporary rear extension that is extraordinary. McBride Charles Ryan Architects’ curved timber-clad space is enclosed by a 26.5ft-wide cloud-shaped window looking out to the swimming pool. It’s a playful design that addresses a number of issues: as the extension’s profile is convex, it doesn’t block light to neighbouring properties, and its walls extend beyond the interior boundary, protecting the house from the sun, while acting as an acoustic blanket shielding it from the noise of the street. Debbie Ryan, the firm’s founder, sees the award-winning project as a perfect example of how windows can become defining statements. “I think people should be more ambitious,” she concludes. “Things have got very boring. Fun is actually a very important part of humanity, and it has been undervalued for too long.”