In the buff – the new shades of gold

As the mood tilts towards restraint, jewellery designers are turning to new alloys

It seems odd, perhaps, that for decades fashion and interior design have anointed a “new nude” or “new neutral” on a seasonal rotation – yet jewellery never got the memo. It has stuck, with few exceptions, to the trusted menu of richly toned golden yellow, brilliant white and perky rose (H Stern’s pioneering pale Noble gold, introduced in 2001, the result of 180 test combinations of metals, is one outlier). Now, though, the landscape is shifting to make space for more softly spoken golds and pieces with a restrained finish or polish – which, far from being bland or dull, feel like an intriguing departure.

In 2019 Omega launched a “Moonshine” gold, a light yellow that mimics “moonlight in a dark blue sky”, while Gaia Repossi, whose own rose gold is more muted than most, has dabbled with beige-toned “champagne gold” in her recent Robert Mapplethorpe collection. Ouroboros custom-blends beige and caramel golds for its bespoke pieces in Jaipur, designing alloys that will complement an individual client’s skin tone. And Chanel, which first introduced its own beige gold in 2014 on the face of the J12 365 watch has has firmly built it into its fine-jewellery brand DNA: it’s a regular feature of its Boy.Friend watches and the Coco Crush line. The hue, synonymous with the house’s designs, reminded Mademoiselle Chanel of wet sand on Deauville beach when the sea retreats.

We’ll see an upsurge in demand for different alloys

Charlie Betts of Single Mine Origin (SMO), which sources fully traceable, responsibly sourced gold for the jewellery trade, says it could well be the tip of the iceberg. “We have been asked for many years about the usual red, white and yellow golds, but recently we’re being asked for green, and I think we will see an upsurge of demand for different alloys. Businesses want their gold to have a point of difference, but the customers are also much more engaged with where it came from and how it is composed – it’s possible the two things will grow hand in hand. And maybe something about these understated shades is appropriate for the times we’re living in.”

The desire for a subtle, nuanced aesthetic in precious metals is perhaps no better shown than in how beige gold – once an oddity – has been welcomed into the family once and for all. Beige gold, or as the architect-turned-jeweller Dina Kamal describes it, “18-carat gold in the raw”, emerges at the tipping point where pure yellow 24-carat gold is combined with a cocktail of other metallic elements (such as silver, palladium, zinc and others that add strength and stability) into a new alloy. When the material, which must have a minimum of 75 per cent yellow gold to be considered 18 carat, has no copper in the remaining 25 per cent (it’s the varying degrees of copper that contribute the pink to “rose” gold), it is the whitest 18-carat gold can be, but it looks beige.

At the very high end of the watches and jewellery market, there is a desire for a more discreet tonal sensibility in general – as seen in the autumnal smoked-gold hues on the dial of Audemars Piguet’s recent Royal Oak “Jumbo”, for instance, and in the increasing pull towards the low-key lustre of matte polished or brushed metals. At PAD in October, the art-collector crowd asked jewellers outright for brushed metals, perhaps because the aesthetic is still more unusual and therefore stands out, but in a less obvious way.

In Cartier’s new twist on the Tank Française, the monobloc metal timepiece originally launched in 1996, the desire was to “reinforce the design’s ‘natural’ aspect”. Along with its softly brushed metal (either steel or yellow gold), the case and bracelet have almost the same tone and finish, a departure from the original, creating a monochromatic impression that lands with a gentle purr rather than a big bang. And at Girard-Perregaux, dialled-back delivery is also hitting the right notes. The low-key Laureato watch with an onyx face, which is performing exceptionally well, is made from pink gold in alternating satin and polished finishes. “The rose gold allows for a more matte tone,” explains head of product development Clémence Dubois.

Kataoka, the Japanese fine jewellers with flagships in Tokyo and New York, has a brushed minky-grey gold. But it’s beige, which represents about 70 per cent of orders, that best reflects the “understated elegance values” that resonate with its global client base. Its designer Yoshinobu Kataoka found many of today’s yellows and pinks “ostentatious”, embracing instead the sensibility of a “silky and subtle” custom, “honeyed yellow” beige gold.

Brazilian fine-jeweller Fernando Jorge, recently installed in his new Mayfair showroom, has been working in beige gold since his first collection out of Central Saint Martins. His designs, which tap into the “body culture and sensuality of Brazil”, have a relaxed, confident and modern elegance. He started exploring the possibilities of beige gold to create a genderless alternative that was “less shiny and golden but not as bright as white”, and has offered it widely since 2016 – both in his main collections and increasingly for wedding bands and bespoke pieces.

“With some stones, yellow gold just doesn’t look right,” he says, “and the plating on white gold can mask its warmth. Beige is refined and beautiful but not too showy. It’s still quite niche but it appeals to the client who wants the real-deal materials but is confident enough to wear something more discreet and subdued. In fact, they want something that’s not instantly recognisable – it’s intriguing, and it’s noticed by the more inquisitive eye.” 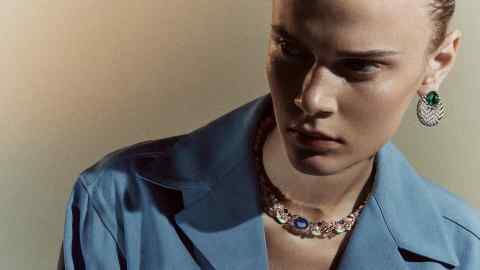 One thing that can’t be missed is a diamond, which reflects and twinkles with a particular refinement when placed on this more “neutral” canvas – as seen in Dina Kamal’s refined pavé-set chains and her diamond-set waterfall earrings, which take inspiration from Frank Lloyd Wright’s seminal concrete Fallingwater design.“The beige gold isn’t competing with the diamonds, so there’s a synchronicity between the metal and the stones,” she explains. “They are equals.”

Balance, as in all things, is crucial here. In fact, Kamal adds the tiniest fraction of copper into her mix for softness. “Too cool and it feels aloof or too masculine; it still needs some sensuality. You don’t see that much of a difference but you can sense it – and that matters.”