Russia competes with the US and Saudi Arabia for the title of world’s largest crude producer. Although it has set post-Soviet records, a decline in output in west Siberia, a key producing region, has forced the country to seek an innovative approach to boost oil recovery.

Unlike the US, where rapid shale oil development has pushed the process of enhanced oil recovery into the back seat, Russia, which does not commercially produce shale oil, has focused on keeping alive mature west Siberian fields by advancing production from hard-to-extract reserves.

Without new technology and state tax incentives, Russia’s crude output risks dropping 40 per cent over the next 15 years to about 6.8m barrels a day in 2035, according to energy ministry forecasts.

West Siberia, which accounts for more than half the country’s crude, has seen output slide 10 per cent over the past decade because of depleted conventional reserves and rising water levels.

“The quality of reserves in the country is getting worse. Costs of per-ton production, fighting water levels and drilling have gone up, while average output per well is declining,” says Andrey Tereshok, deputy department head at the energy ministry.

“That is why developing hard-to-extract reserves and stimulating production from them is one of the main topics for the ministry, it is a priority.”

Russia’s 28 per cent oil-extraction factor, the indicator of a field’s efficiency, is far below the US’s 44 per cent and Norway’s 50 per cent, says the energy ministry.

“To offset production decline by 2035, 15 per cent of crude has to be produced via oil recovery enhancement,” Mr Tereshok says.

Russia, which used flooding to boost output at fields up until 1970, today excels in hydrodynamic methods, such as drilling horizontal, sidetracking and hydraulic fracturing, says Artem Frolov, vice-president at Moody’s.

Such technological solutions as increased share of horizontal drilling, multistage hydraulic fracturing and multi-hole drilling have allowed Rosneft, Russia’s top crude producer, to slow the decline at Samotlor to 1 per cent last year. The oilfield dates back to 1965 and is one of the largest in the world.

A similar approach has helped Lukoil, the country’s second-largest producer, to reduce the decline at its west Siberian assets to a forecast 2.2 per cent this year, compared with a 9 per cent annual fall before 2016.

It is uncertain, however, if these methods alone can materially improve the ultimate recovery rate over the life of the field, and their efficiency declines as more of such operations are made, Mr Frolov says.

Companies have been trying new ways to keep up the recovery rates but their cost does not always justify the investment. The use of most common tertiary methods to improve recovery rates, such as polymers, pumping CO2 and heating, remain uneconomic today, and are only applied to 1.5 per cent of total oil production in Russia, according to the International Energy Agency.

“Impediments to developing these methods include high capital and operating costs, lack of infrastructure, such as domestically produced chemicals and digital modelling systems, and risks of not achieving the expected output target or inability to replicate the method outside of test field,” Mr Frolov says.

The costs of enhanced recovery techniques vary from about $200 to $300 a tonne, the use of surfactants being the most expensive, followed by thermal measures, CO2 injection, and the use of polymers, according to the energy ministry.

“The task is made more difficult by the fact that sanctions are limiting the provision of some of the more complex technologies in Russia, while the weakness of the rouble, while generally beneficial, is increasing the cost of imports,” Oxford Institute for Energy Studies said in recent research.

Russia’s energy sector has been under US and EU sanctions since 2014, limiting access to foreign capital and technology, as well as partnerships with foreign companies on certain projects. While sanctions have prompted a wave of import substitution, it still does not fully address the industry’s needs — either for lack of competencies or state support.

Taxes remain the elephant in the room in Russia, which has some of the heaviest and most complex oil tax burdens in the world. The Russian state’s share in a West Siberian project’s net revenue reaches up to 90 per cent, double the state share in the US, according to Vygon Consulting, an independent Moscow-based consultancy.

Gazprom Neft, the country’s third-largest producer and a technological leader, together with Shell has developed a technology tested at its Salym Petroleum joint venture using a costly cocktail of anion surfactant, sodium and polymer.

It could triple the recovery factor at west Siberian mature fields and help produce billions of tonnes of additional crude. The companies, however, have been unable to apply them commercially because of the lack of tax incentives.

“Chemical use in advanced recovery rates techniques is being used many times less than it is abroad, because it needs a special tax approach,” says Vadim Yakovlev, Gazprom Neft deputy chief executive.

With proper conditions in place, enhanced oil recovery could produce between 800,000 to 2m additional oil barrels a day in Russia by 2030, according to various state and company estimates. Without any tax measures, however, west Siberian output could shrink 17 per cent to 2024, says Vygon Consulting.

READ MORENick Butler
Is digitisation the fourth stage of the hydrocarbon revolution? 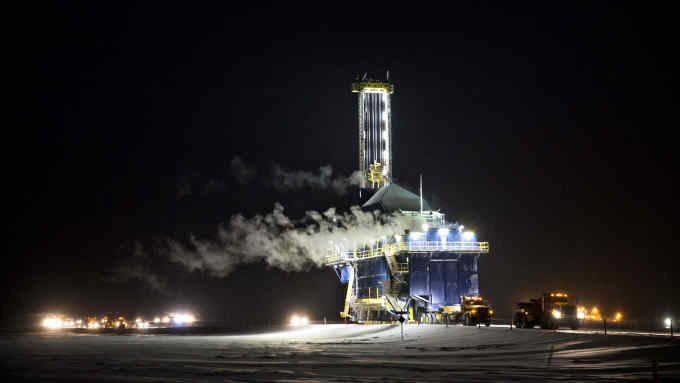