Generalist big firms are increasingly vying for work with specialists

The amount spent by HS2 Ltd on PwC, Deloitte, KPMG and EY rose by £24m in the year to September 2019, up from £10m the year before, according to research by Tussell, a data provider on government contracts and spending.

Although the Big Four management consulting firms traditionally provide auditing and financial analysis on large infrastructure projects, they are increasingly competing for project management roles that have in the past been taken by specialist construction and engineering consultancies such as Bechtel, Mace and Jacobs.

On HS2, for example, KPMG was initially brought in to make the economic case for the project but now acts as its representative — liaising between the Department for Transport and the high-speed rail team managers.

“Traditionally, we would have been involved as a financial adviser or on strategy or to argue the business case but now we are getting involved in project and asset management,” says Richard Threlfall, head of global infrastructure at KPMG.

The future of HS2 remains uncertain amid concerns over ballooning costs, which an independent review predicted could rise as high as £106bn. Although about £8bn has been spent so far, construction has not yet started. Boris Johnson, the prime minister, is expected to announce within weeks whether the government will proceed with the project in its entirety — or at all.

The move into rivals’ territory goes both ways, with the specialist engineering and infrastructure consultancies also encroaching into the management consultants’ space. They tend to cost about a third of the price of the strategy experts or the Big Four.

Jason Millett, chief executive of consultancy at Mace, which worked on the London 2012 Olympics and the delivery of Birmingham New Street station, argues that the government should use a wider range of suppliers.

It is “quite ironic” that the government talks of making efficiency savings but uses the biggest firms when specialists would be “a lot cheaper”, Mr Millett says.

One reason that the large professional services firms are seeking roles on infrastructure projects is that projects have become more complicated. Consultants can use expertise in data analytics to inform construction and maintenance decisions, says Mr Threlfall.

In the past, a decision to maintain or resurface a road would be made by engineers, but now that assessment is increasingly being driven by big data — for example, an IT dashboard that records the condition of assets in real time and provides a warning that the asphalt is wearing.

Alexander Jan, chief economist at Arup, says that it has evolved over the decades “from being a 100 per cent building engineering firm to a built environment consultancy, simulating the crash worthiness of the new London taxi and masterplanning new cities around the world”. 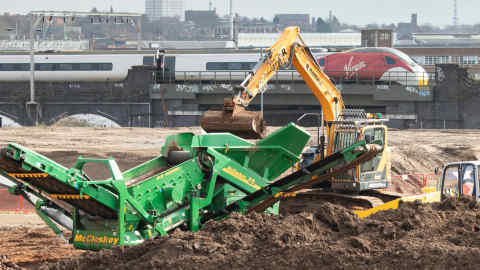 Lots of firms are trying to do the same, he says. “The march of technology has brought down the cost of design of some less complex engineering.”

To this end, Arup has created an entire division called Advanced Digital Engineering, which specialises in leading-edge technologies.

It is not the only consultancy to spot new opportunities in the marriage between technology and infrastructure. Last year the engineering consultancy Mott MacDonald formed a partnership with the technology company Microsoft.

Mott MacDonald, which has worked on the bridge between San Francisco and Oakland Bay in the US, and London’s new Crossrail train line, says it uses the technology to help make decisions on infrastructure, for instance on monitoring water quality for the city of Auckland in New Zealand.

Jacobs, which is working on London’s new “super sewer” and the Crossrail train line, is another that is “increasingly seeing itself as a technology-driven company and moving away from that traditional consultancy space”, says Donald Morrison, head of the consultancy’s Europe, Middle East and Africa business.

“We will be coming up with smarter solutions that may include not building at all,” Mr Morrison says.

To this end, Jacobs last year bought a 50 per cent share in Simetrica, a UK-based company that specialises in measurement of social value and wellbeing analysis. In a further sign of Jacobs’ new technology focus, it has also been collaborating with Telefónica UK, the telecoms provider, to better understand travel patterns on the UK capital’s transport network for Transport for London.