Christine Lagarde is pushing for climate change to be part of a strategic review of the European Central Bank’s purpose, spearheading a global drive to make the environment an essential part of monetary policymaking.

The plan underlines Ms Lagarde’s declared goal as president to make climate change a “mission-critical” priority for the central bank. It comes as European Commission president Ursula von der Leyen, whose team on Wednesday was officially endorsed by the European Parliament, is about to unveil her first landmark climate policy package.

The agenda of the ECB’s review has yet to be finalised but two people involved in the discussions said the environment was likely to feature in the first such comprehensive review for the institution since 2003.

“We have reached the point where the reputational risk of doing nothing is large enough that they will have to announce something at the end of the review — the big question is what,” said Stanislas Jourdan, head of Positive Money Europe, a campaign group.

However, Ms Lagarde risks setting up a clash with some Eurozone central bankers who argue climate change should be a matter for national governments.

Without any further delay, the ECB should commit to gradually eliminating carbon-intensive assets from its portfolios, starting with immediate divestment from coal-related assets

Any move by Ms Lagarde would also differentiate the ECB from other central banks. The US Federal Reserve has avoided environmental issues in its year-long strategy review and its chairman Jay Powell recently told Congress that “climate change is an important issue but not principally for the Fed . . . That is for elected officials, not us”.

The Bank of England plans to incorporate global warming and green policies in its annual stress tests of the biggest British banks, but its governor Mark Carney has stopped short of using monetary policy to tackle climate change.

Ms Lagarde, who has brought a greater focus on green issues since replacing Mario Draghi at the start of November, is expected to be quizzed about her plans when she appears before European Parliament on Monday.

She hinted in a recent letter to Green MEP Ernest Urtasun that climate issues could be part of the ECB’s strategic review, which she said “will constitute an opportunity to reflect on how to address sustainability considerations within our monetary policy framework”.

François Villeroy de Galhau, Banque de France governor and member of the ECB’s governing council, said he supported Ms Lagarde’s initiative, adding: “Climate change is a strategic priority for the ECB, meaning we have to include it in our economic forecasts and models; and it is an operational priority, which means we have to consider it when assessing the value of collateral we accept from banks.”

By increasing energy prices and lowering economic growth, global warming could cause a “stagflationary shock”, which meant it was “already part of our price stability mandate”, he told the Financial Times.

There are signs that EU policymakers want to go further in using banking regulation to tackle green issues. Valdis Dombrovskis, a vice-president of the European Commission, told the FT that he wanted to examine a cut to the capital charges imposed on banks’ climate-friendly lending.

Gillian Tett
Central banks are tuning in to climate change 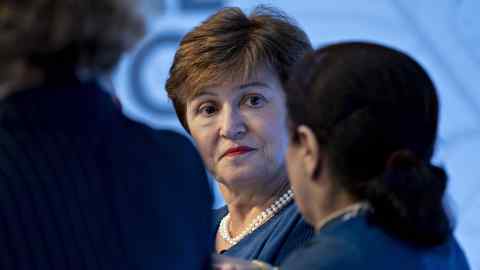 In a letter to be published on Thursday, more than 150 academics, economists, trade unions and environmental activists will urge Ms Lagarde to do more to protect the climate.

“Without any further delay, the ECB should commit to gradually eliminating carbon-intensive assets from its portfolios, starting with immediate divestment from coal-related assets,” reads the letter, whose signatories include Adair Turner, former head of the UK’s financial watchdog, and Francesco Papadia, former director-general of market operations at the ECB.

The ECB’s decision to buy bonds of carbon-intensive and fossil fuel-related industries as part of its €2.6tn asset purchase programme is “particularly shocking”, the letter says. “Climate-impact criteria should be used to screen all assets currently eligible for monetary operations.”

Letter in response to this report: