How conservation investment could be a lifeline for endangered species

When the Zoological Society of London in July unveiled a $50m “rhino impact bond” the response was “off the charts”, according to Oliver Withers, the organisation’s head of conservation finance.

“It got to the point that we were not in a position to handle all the queries,” he said of the first such initiative dedicated to the protection of a species. “What it made clear to us is there is huge investor demand for conservation finance products.”

The excitement has spread beyond ZSL, which is the Financial Times’ 2019/20 seasonal appeal partner.

Credit Suisse, an investment bank that had expressed an interest in the bond, has become an adviser on the transaction and PwC, the auditing firm, has come on board. The scheme, which uses the “outcome payments” model that has been used to finance health and education, rewards investors if rhino populations in five targeted areas in South Africa and Kenya increase over five years.

Experts in conservation and finance say the reaction shows wildlife conservation finance, for decades largely the preserve of wealthy donors and governments, has massive potential to attract institutional investors, helped by growing public awareness of the delicate state of the planet.

“I think we’re at the dawn of something new,” said Giles Davies, founder of Conservation Capital, the finance company arranging the rhino bond. “It’s been led by climate issues and a rushing realisation that something has to be done and everyone has to play a role.”

But they stress the response to the bond also highlights the challenges.

Marisa Drew, chief executive of Credit Suisse’s impact advisory and finance department, describes wildlife conservation as being at the “frontier of frontier investing”, even for people “who are investing for a return while also trying to achieve a positive outcome”.

A scarcity of mechanisms for institutional investors to deploy their capital and the difficulty of putting a monetary value on the environment are two of the main reasons for this, she said.

Tens of billions of dollars are invested in conservation annually, according to the Coalition for Private Investment in Conservation (Cpic), a global partnership of interested parties, but much of that is spent on forestry and water rather than wildlife. It estimates that more than $400bn is needed each year to reverse decades of declining populations.

The potential interest is also demonstrated by the rapid rise of green bonds and loans, most of which are focused on renewable energy, buildings and transport. These have increased from under $50bn globally in 2015 to more than $200bn in the first 10 months of this year, according to data from the Climate Bonds Initiative, a non-profit organisation.

Conservation finance professionals reckon their sector is perhaps 10 years behind the renewable energy market but might develop more slowly because it does not enjoy the subsidies that incentivised energy investment.

On its side, however, is an ever-growing army of vociferous young activists campaigning for greater protection for the environment.

Fabian Huwyler, a Cpic founder, said institutional investors still consider the conservation sector unattractive because most projects are “relatively small, below $10m. Most are $1m-$5m”.

Some conservation groups are setting up investment arms to address this. The most prominent is NatureVest, established by The Nature Conservancy: it aims to deploy $1bn by the end of 2021.

“It’s all symptomatic of this wakening up, and a recognition that the gap’s not going to be filled by philanthropy or the public sector, it’s going to have to be filled by the capital markets,” Mr Davies said.

Another challenge for conservation groups is that most people in finance are unused to dealing with conservation non-governmental organisations, or how to structure suitable products, assess risk and so price potential returns.

“Financial markets are not set up to do difficult things,” said Aunnie Patton Power, a senior adviser at the Bertha Centre for Social Innovation and Entrepreneurship at Cape Town university. “They’re set up to do complex things but not difficult things and conserving the environment for the next generation is a difficult thing. But we can make them. The rules are being mapped all the time.”

One way that mainstream investors are being convinced to invest is through the blending of financing. This is usually done either by recruiting philanthropists to accept lower returns than other investors, or combining conservation initiatives with more established investments that affect the programme. These could be job creation, education and eco-tourism schemes in the nearby communities. Or, as Mr Withers said, it’s about “moving beyond fences and firearms”, referring to the historical approach to protecting wildlife.

One way ZSL is doing this is through the development of village savings and loans schemes, from coastal communities in the Philippines to remote areas of rural Nepal.

Richard Speak, the founder of Environmental Finance, a leading London-based environmental impact investment adviser, said this was an indicator of how the sector is likely to develop.

“No one product is going to save the world,” he said. “It has to be an ecosystem — the right capital for the right activity and the right products for the right investor.”

One example is ZSL’s Sustainability Policy Transparency Toolkit programme, which publishes assessments of producers and traders in the palm oil, timber and pulp, and rubber sectors based on publicly available data. Investors and buyers can use SPOTT to help meet their own environmental, social and governance commitments and promote better practice.

Since launching five years ago, the SPOTT team has more than doubled in size and broadened its remit to more detailed assessments of more companies in more sectors as interest rises. Its first report on the rubber sector is published on Tuesday.

Ms Patton Power believes data and technology will be game changers. “As the use of tech becomes more prevalent and cheaper and widespread, you’re going to see a different attitude to investing in conservation,” she said. “Funds will expect it, but programmes will be able to demonstrate outcomes.”

“I’m hopeful that five to 10 years from now we’ll have lots of success stories to share, and rather than conservation finance being a ‘science experiment’ it becomes a mature asset class of its own,” she said. “That would be the holy grail.” 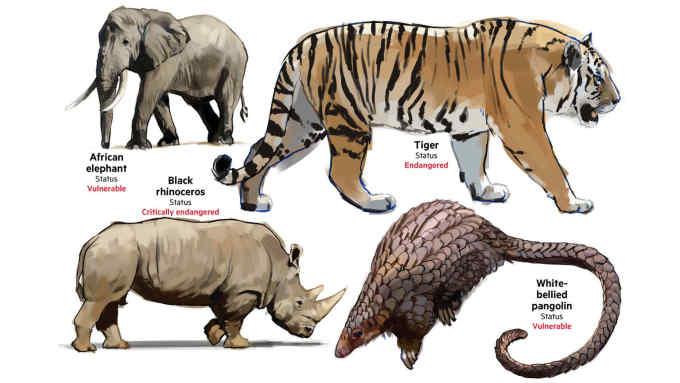