Théo Scubla’s grandmother always wanted him to achieve the success as an entrepreneur that eluded her as an Italian immigrant to France. He has done so by helping her modern-day equivalents. In 2015, while studying for a masters in management at ESCP Europe, Scubla co-founded Wintegreat, a not-for-profit training enterprise for families seeking to build a new life in France.

“The founding value is optimism,” the 24-year-old says, admitting that the name is a slightly tortured mash-up of “win”, “integrate” and “great”. “All my childhood years I was hearing these words,” he adds. “I only realised afterwards it had an influence on what I did next.”

Helping migrants was not Scubla’s primary aim. He wanted to be an entrepreneur and arrived at ESCP’s Paris campus eager to find a start-up idea. On his first day, however, he was invited to visit a housing centre for refugees near Paris. There he met unemployed Syrians Omran, a former economics student, and Rateb, who had been an engineer at a power station, and realised there was an opportunity to set up an organisation to train such people to be ready for work in France.

“I had no idea how exactly to bridge this divide, but I knew it was a question of training and finding potential employers,” he says. “I also realised there were lots of wonderful resources around me [at ESCP] that could be used to help refugees like those I had met.”

Refugees were front-page news: the political crisis over refugees arriving in Europe from Syria and other Middle Eastern countries was reaching a peak as Scubla started his degree. “The timing was perfect,” he says.

Within two weeks of beginning his studies, he launched Wintegreat, with the blessing of ESCP’s dean, Frank Bournois. “He told us we were free to do what we wanted.”

The company’s first seven recruits were from the MiM class, but this proved both a blessing and a curse. Maxime Baudet, a fellow student, helped launch a second company, Wero, a for-profit employment agency specialising in finding work for refugees; he is chief operating officer of Wero, and Scubla share the title of co-founder for this venture. Others have left Wintegreat, mainly over differences about the strategic direction the business should take, says Scubla. Rival suggestions included focusing on finding jobs for refugees rather than training or starting a charity to help with short-term practical problems such as providing clothing. “Creating this team was our first mistake,” Scubla says. “People were not aligned on this vision we had to do something social.”

Ruling out these other models helped the founding team define precisely what they did want, Scubla adds. They came up with a 12-week course covering language skills, how to make connections, building credibility, developing interpersonal skills and preparing professional projects.

Each course topic was taught by ESCP staff. “We relied on ESCP’s resources for the first programme,” he says. “They were really into the project because it was deeply aligned with the school and is a real humanitarian programme.” It was also a good fit with his studies, he adds.

“I had a clear vision and one that was different to other initiatives to help refugees,” says Scubla, adding that he is driven by pragmatism about creating value from a situation that will not go away any time soon. “At the time we launched Wintegreat, television and newspapers were full of images of people in boats, and people were worried. I felt we were not facing a problem, however, but an opportunity.”

Wintegreat has grown rapidly, placing ever greater demands on the founders’ time. With 50 employees, the company now helps refugees to study at 13 French business schools as well as engineering schools and universities, including Sciences Po Paris. To date, it has trained more than 1,000 people, 95 per cent of whom say they have gained confidence from doing the course. Meanwhile, 73 per cent say they have had a “positive outcome” within three months of starting the programme.

The plan is to scale up internationally, with a target of 30 French business school partners and new operations with institutions in Germany and Italy by the end of 2020.

Being part of ESCP helps with the international expansion because the school has campuses around Europe and further afield. The Berlin campus is helping with the German launch, for example. “If I had chosen to study at another school, I would have launched another company, but it wouldn’t have been this idea,” Scubla says.

He juggled student life with working on the business, finding time to socialise with his classmates — an essential part of the networking that makes the MiM so valuable. He cannot recall missing a single student party. 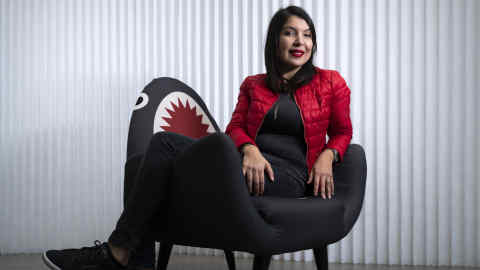 What kept him going was the drive to make Wintegreat work. “It was easy to do everything at the same time. We had a lot of energy for this, so we were working long hours. Maybe the only sacrifice was sleep.”

One of the most valuable elements of the degree for Scubla was the design-thinking course. “It is an innovative way to talk about effectual entrepreneurship,” he says. “It helped me put words on my entrepreneurial way of thinking so that I can analyse situations better depending on the different contexts of decisions.” Another favourite was a course called “The CEO’s Studio”, where students were introduced to a different company head every week, to be inspired and share best practice in leadership, dealmaking, building a strong team and communication.

Refugees pay nothing for Wintegreat’s courses. The non-profit is able to do this because the sponsor universities provide the training and facilities for free. “The universities like us because we help them show they have an impact beyond just teaching students about business,” says Scubla, noting that participants have numbered 39 nationalities.

Funding has come from corporate backers, starting with BNP Paribas, the French bank. Pitching to the bank involved a good deal of work, but it proved a lucrative source of cash once Scubla had learnt he could tap social mobility budgets. Wintegreat’s backers now include French oil group Total, Italian insurer Generali, and EDF, the French utility company.

The business also receives funds from the French interior ministry for its efforts in helping relieve the refugee problem. It is also supported by the charitable foundation of former French president François Hollande. “We [told them] that giving money to us is an investment,” Scubla says. “We were able to measure the savings for them.”

The venture has sufficient corporate and government funding to grow significantly larger, and sells its training to universities and companies, generating further revenue. “We have found a way to monetise this,” Scubla says. “Universities are knocking on our door.” Further income comes from providing companies with professional training for non-refugees to improve their soft skills when dealing with people from overseas. “It is helping companies with the integration question,” Scubla says. Wintegreat now employs its own trainers, although it still uses some ESCP professors.

Scubla’s second start-up, Wero, is being “bootstrapped” — in other words funded from its own revenues as it grows. “We could have raised money, but we chose not to because we had enough business leads to start the company through Wintegreat and finance it from the activity itself,” says Scubla, adding that Wero will record its first annual profit this year, two years after launch.

Wero currently works with 11 large companies, including French supermarket chain Intermarché and HSBC bank. So far it has helped 150 people into employment. These are small numbers, Scubla admits, but the plan is to scale this up significantly this year, drawing on the large pool of students coming through Wintegreat’s programmes. “We are working to create new habits in companies,” he says. “We are enabling big employers to employ differently.”

How does his grandmother feel about what he has achieved as an entrepreneur? “She is very proud, but she is sad to have not done what I did herself,” Scubla says of her experience at a time when opportunities were more limited for a migrant woman. “She says, ‘You know, Théo, I would have loved to have studied like you, but for me the world didn’t change quickly enough.’”