Clive Cookson in London and Richard Milne in Oslo

When Norway’s public health experts began looking into the backgrounds of those infected by coronavirus, they made a startling discovery: people born in Somalia have infection rates more than 10 times above the national average.

The Scandinavian country has just over 7,500 Covid-19 cases, equivalent to 140 per 100,000 inhabitants, according to data released on Tuesday. But 453 of those cases have been among the relatively small community living in Norway who were born in Somalia, a rate of 1,586 per 100,000.

“You would hear of an uncle who had been hospitalised and that this family has been infected,” said Ayan Bashir Sheikh-Mohamed, a doctor of Somali origin living in Oslo who was among the first to alert the authorities to the worryingly high death rate. “It felt like there was a lot of people.”

Inquiries into why racial minorities are so heavily over-represented among those suffering from Covid-19 are under way, although few expect simple answers. Health experts and academics are now searching for clues among the multiple medical, socio-economic, behavioural, cultural, environmental and biological factors that could be driving the association between Covid-19 and ethnicity.

“When we started to raise the alarm about four weeks ago some people thought it was scaremongering,” said Kamlesh Khunti, professor of primary care diabetes and vascular medicine at Leicester University in the UK. “Now we see that more than 70 per cent of healthcare professionals who have died in the UK have been from Bame backgrounds.”

Similar patterns showing disproportionate numbers of Bame virus victims have emerged in the US and other European countries with large minority populations, although Prof Khunti said none had as strong evidence as the UK about overall ethnic patterns of Covid-19. France, another country with a large Bame proportion, prohibits the gathering of statistics based on ethnicity.

“We in the UK are in a position to alert the world to what is happening,” said Prof Khunti.

In the US, data compiled by the Centers for Disease Control and Prevention is incomplete. But it shows that white people accounted for 51 per cent of Covid-19 cases whose race was specified, compared with 74 per cent of the US population.

One factor being investigated is comorbidity. Jerome Adams, US surgeon general who is African American, has warned how the community is at greater risk because of higher rates of underlying conditions such as diabetes, heart disease and obesity that make people more vulnerable to Covid-19.

African Americans also tend to be poorer and less able to socially distance because of the type of work they do and where they live. People from minority communities often live more closely together than in the general population, with extended families mingling in crowded conditions.

They are also more concentrated in public-facing jobs such as transport and delivery, as well as health and social care, where they risk greater exposure to the virus. “For many reasons people from Bame backgrounds may find it difficult to maintain social distancing,” said Prof Khunti.

Many of the same reasons probably explain the high rates of infection in the Somali community in Norway. They are generally poorer and live in tight family units. Many work as taxi drivers, and could have driven the skiers returning from their Alpine holidays, which was the source of most early cases in Norway.

Trude Margrete Arnesen, a specialist at the Norwegian Institute of Public Health, flagged the added difficulty of being able to deliver advice. “Everybody else is marinated in information on Covid-19 from morning to evening but not groups that do not tune in to mainstream media,” she said.

Dr Sheikh-Mohamed, the Oslo doctor, agreed the authorities made a mistake by relying solely on written material that many in the Somali community could not understand. She and a friend had a YouTube channel that they used for public health videos in Somali and soon had posted several about coronavirus, including one on washing hands that went viral, as well as a telephone hotline.

In the past few weeks, the number of infections has begun to fall among Norwegian-Somalis, leading Dr Sheikh-Mohamed to call her campaign a success. “The seriousness of this illness has really struck people,” she said.

While genetics has been mentioned as a possible contributing factor that makes some ethnic groups more susceptible to the virus, this explanation was ruled out by Ewan Birney, the director of the European Bioinformatics Institute, part of the European Molecular Biology Lab.

“After the obvious large differences in comorbidities and socio-economic status between ethnic groups, genetic effects — which might have some effect between individuals — are very unlikely to contribute to the average between-group effects,” he said.

An international research effort is under way to examine genetic differences that make some people more likely than others to be infected with the virus or to develop severe symptoms.

The UK government has also commissioned several studies to investigate Covid-19 in ethnic minorities, but clear reasons have yet to emerge. “From the first two or three I have not seen any great consistency of analysis,” Sir Patrick Vallance, the country’s chief scientist, said at a briefing this week. “I don’t have an explanation.”

Video: Coronavirus: how Germany is containing the epidemic 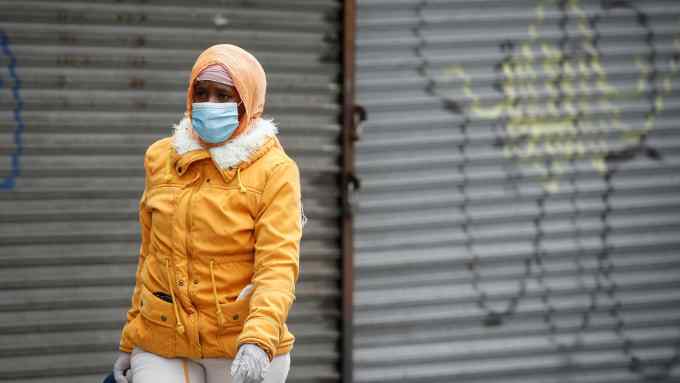