We use cookies (opens in new window) for a number of reasons, such as keeping FT Sites reliable and secure, personalising content and ads, providing social media features and to analyse how our Sites are used.
Manage cookies
Accept & continue
Tesla Inc

Elon Musk’s dream has been to build an electric car priced for the mass market with the driving range, styling and brand power to hold its own against some of the world’s best-regarded carmakers.

His attempt to make that dream reality, a decade in the making, was driven on to the stage at the Los Angeles design studio of Tesla Motors on Thursday evening.

Given the handpicked audience of loyal Tesla owners, employees and media, the reception was guaranteed to be rapturous. But for Mr Musk, who has taken on entrenched interests in the auto industry, it was still a moment of vindication.

Speaking when Tesla was still in its early years, Bill Ford, chairman of the company that bears his family name, argued that the complexity of the global supply chain and international regulatory requirements made it all but impossible to launch a major new carmaker from scratch. And that was before even taking into account Tesla’s attempt to pioneer an entirely new technology.

But the first indications of demand for Tesla’s new vehicle, the Model 3, suggest otherwise. More than 115,000 people placed pre-orders for the new vehicle on Thursday before the Tesla chief executive even took the wraps off the vehicle — a number that continued to climb as the evening wore on. It dwarfed the 50,658 vehicles the company delivered last year — though it still provided little indication of whether Tesla would be able to get to its target of annual sales of 500,000 by 2020, let alone make a profit doing so.

The Model 3 is set to be make or break for Mr Musk’s vision for the future of the automobile industry. In 2006 the South African entrepreneur, then the company’s chairman and chief investor, laid out what he called his “master plan” for the company.

Other carmakers had always tried to compensate for the high cost of electric batteries by cutting other costs to the bone, counting on customers’ heightened environmental consciousness to sell cars that fell short on many counts. But Mr Musk had a different plan. It was taken from the computer industry, where he had made his first fortune. Starting with the Roadster, a high-price, sporty vehicle based on a vehicle shell made by Lotus, he counted on a declining technology cost-curve to bring his company’s vehicles to a mass market.

In practice, the curve has fallen a lot less steeply than Mr Musk once hoped. Long delays have held up the launch of his vehicles — the most recent, the Model X crossover sport utility, by two years — and stretched out the time it has taken to get to this point. Prices have also stayed stubbornly high: compared to the roughly $45,000 he once hoped to sell it for, his high-end luxury sedan, the Model S, now has a base price of $70,000.

The final stage, however, could finally be in sight.

“I think it will be the perfect car for the city. It’s the car everyone has been waiting for,” said Wolfgang Hageleit, a Tesla owner from Regensburg in Germany who flew to California for this week’s event. “It’s far ahead of German [electric] cars.”

Getting the price of the Model 3 to $35,000 — putting it in the same range as BMW’s 3 Series — has taken some drastic changes from the S. Its body is steel, heavier but cheaper than the aluminium bodies of Tesla’s previous cars.

There have also been design decisions aimed at making the car easier and cheaper to manufacture — in stark contrast to the Model X, whose falcon-wing doors became a major manufacturing headache.

“Everything in the car is designed to be assembled very easily,” said Doug Field, Tesla’s head of engineering. “Automation and robots are a big part of it, so that we can make very high volumes in a relatively small factory.” Inside, the Model 3 has a stark, stripped-down feel. In place of an instrument panel in front of the driver is a bare shelf, split horizontally to create an air vent. Mounted on it is a 15-inch screen — smaller than the 17-inch screen in the S, but still the eye-catching centre of the car’s information systems.

To produce enough batteries to feed his volume ambitions — and to bring costs down far enough — Mr Musk has also been forced to build his own massive battery plant, in partnership with Panasonic. Tesla said the Model 3 would be able to do 215 miles on a single charge, though further advances before launch should improve that.

Despite the cost savings, Tesla is still bent on endowing its new, lower-end car with some of the key attributes that have helped its S win accolades. It will have rapid acceleration of 0-60 in less than six seconds. “At Tesla, we don’t make slow cars,” Mr Musk said. It will also come embedded with all the sensors and safety features needed to turn it into an autonomous vehicle, and drivers will be able to use the company’s network of superchargers to get free power while on the road. 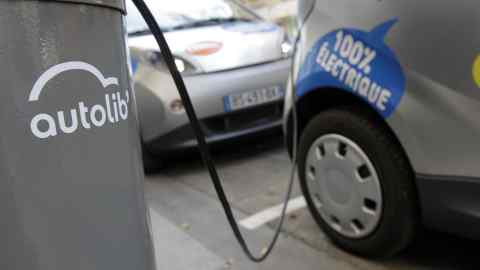 Yet Mr Musk still has some way to go to convert the early enthusiasm his showmanship has drummed up for the Model 3 into hard sales. Not least, he must demonstrate a much stronger attention to execution than at other Tesla launches if he is to hit the target launch date of 2017. And he must still persuade would-be customers, who can recover their $1,000 deposits on pre-orders for the Model 3 at any time, to follow through with a firm order when the time comes.

Ernie Petrocine, a Tesla owner from Colorado who put down deposits on two new cars on Thursday — the maximum Tesla has allowed — said he had not decided yet what to do with the vehicles. But, like many others, he was caught up in the moment, convinced that a significant moment in automobile history is at hand — and that, if the worst comes to the worst, there is little risk in getting on the waiting list early.

“If there are so many [orders] that people won’t be able to get them until 2020 or something, I’ll be able to put it on eBay,” he said.